Virtually all cultures have creation stories…

Here are a few examples of cosmogenic stories; those about the creation of the world:

There are many examples from ancient Egypt, which originated in different parts of the country, but were nonetheless believed simultaneously with one another.

Amun is a sun god who creates himself from a cosmic egg in a burst of primal energy.  He is seen in the form of a wind, stirring primeval ooze into a vortex.  A primeval mound of silt emerges from this ooze, which gives the sacred shape of a pyramid. Later, Amun is depicted as a Nile goose, which calls the cosmos into existence out of silence.  This causes him to be known as The Great Honker! Another Egyptian story concerns Atum, often known as Ra, the creator-god of Heliopolis.  He creates Shu and Tefnut.  In one version, Atum sneezes to create Shu (promounced “Shoo”) from his mucous, and he spits out Tefnut.  These two names can be connected with the hieroglyphs for sneezing and spitting.  Shu is the god of the air, and his sister, Tefnut, is the goddess of moisture and the dew. Shu and Tefnut become parents of Geb, the earth, and Nutt, the sky, who is depicted stretched across the cosmos, and is a significant creator-goddess.  Geb and Nutt fall madly in love, and will not separate.  To allow the earth to thrive, this pair have to be prised apart, and Shu, the air places himself between them.

A golden embryo rides a primeval sea, who becomes the Lord of Creation to whom the pantheon owes allegiance.  It is the source of life, the creator of the earth and the sky.  Paradoxically, the very waters which bore the embryo are also created from it.  This creator rules over everything that breathes and blinks.  This is the source of the Jewel in the Lotus image found in Buddhism.

Quetzalcoatl, the “Feathered Serpent”, an aspect of the sun, is engaged in a struggle with Tezcatlipoca, “Smoking Mirror”.   Their battling causes the creation and destruction of four ages of the world and their ruling suns.  The adversaries then co-operate to repair the shattered universe and initiate the fifth sun – the present one.

Vatir, the moon God, marries the earth goddess, Papatunuku, who swells so much with the waters trapped inside her body that she bursts.  This brings forth two sons, the gods of the ocean and of agriculture.

The creation of human beings often follows the story of the creation of the universe.  However, there are sometimes prototypes that don’t quite work out.  There are the Titans, demigods, talking animals – not to mention Diarrhea Man, an obscure figure from Siberia.  (Perhaps it’s better that he stays that way.) Humans are often created from mud, potter’s clay, or divine bodily fluids.  The reasons for their creation can be quite diverse.  Perhaps the oldest surviving version is the Sumerian. The earliest recorded version of this story dates from around 2000 BCE, although the names of these creator figures  can be identified as early as  3500 BCE:

Enki, god of wisdom and the waters,  is asked to provide servants for the gods.  He explains to them how to make beings from mixing river mud with divine blood, and a feast is called to celebrate.  Enki and Ninmah, the midwife goddess, become thoroughly intoxicated at the feast.  She and her helpers collect the mud to make six kinds of individuals, while Enki decrees their fates and gives them bread to eat.  These six don’t turn out so well; one with no elbows or knees, one with no eyes, one with paralysed feet, one whose penis drips semen, an infertile woman and an asexual being.  Enki tries to create a seventh individual with his own hands, but only manages to create a sickly feeble creature. These are the first humans.

There are earlier portrayals of anthropomorphic  figures, for example, the wonderful stylised  images found at Gobeli Tepe in eastern Turkey,and thought to be up to 12,000 years old. However,  it is impossible to tell if these images are intended to be gods, ancestor figures or humans and in what relationship they stand to the highly naturalistic, high relief, animal carvings. ,Generally, mythic ally speaking , humans are created either deliberately or accidentally by a powerful and pre-existent god-like being. Such stories seem to be absent in early Irish mythology.  Indeed, if you seek for a pre-existent higher being who creates the universe, the world or humanity, you won’t find one.  However, there are elements of  creation stories in the Irish tradition. 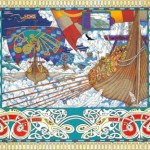 Cosmogenic stories about the creation and shaping of the land can be found in the texts such of the Lebor Gabála,  The Book of Invasions.  These texts record the coming of five, or maybe six, different groups of people to the island of Ireland, which seems always to have existed.  Each of these groups puts a new shape onto the landscape: they create plains out of the wilderness, create wells of fresh water and bring rivers, lakes and mountains into being.  Each group starts from where the previous group has left off, giving a progressive shaping of the land from one generation to the next. For example, in the podcast The Story of Macha, episdoe  2 in the first “Acallam na nÉces” series,  we discuss how Nemed comes to Ireland with his wife, Macha, and find a land that is cleared but uncultivated.  Macha, “plains, pastures”, creates land good enough to raise horses, while Nemed “enclosure, space / person of learning” creates the “garden” space, set aside for learning and wisdom.  Nemed is said to lead the third “invasion” of Ireland in the Lebor Gabála. The Lebor Gabála,  The Book of Invasions  is not an ancient text and is a part of the post-Norman literary tradition which includes a more aggressive synchronisation with biblical  pseudo-history.  The structure could, perhaps,  have involved an attempt to create an Irish Genesis story, yet, the backbone of the story does not seem derivative of the Genesis myth.  For one thing, the story of the Lebor Gabála is not prefaced by the creation of the whole universe, nor even the initial creation of the island of Ireland.  The land itself is already in existence. The common thread in these Irish myths is that the land is shaped by the people who come to it.  This “creation” of Ireland is always in terms of how the land can be used for future generations.  It tends to be quite literal and down-to-earth, with little supernatural power required for this landscaping, which is clearly done through manual labour. This topic of post-Norman synchronisation and alteration is addressed  in several of our podcast episodes, particularly from  series four, ‘in search of Manannan’ and ‘In search of Midir’

Now we turn to the issue of the creation of humankind.  It seems clear that it is people, not gods with miraculous powers, who have created the land, even if their strength and stamina seems remarkable.  There are simply no stories of the creation of people.  The groups who come to Ireland, right down to the Sons of Mil, who are supposed to be  direct ancestors, come from sleep, from darkness, or simply from over the sea.  The names of prominent Milesians, such as Ír and Eber, often appear in the genealogies of kings, giving historical kings a mythological legitimacy.  Their predecessors, the Túatha Dé Danann, also seem responsible for some of our DNA, according to the genealogical texts.  Indeed, the surname “Carmody” seems to derive from Cermait, a son of the Túatha Dé Danann character, the Dagda.  Mind you, the Dagda seems responsible for many genealogical lines, and deserves his title of Ollathair, “all-father, great father”. While the Sons of Mil, who are said to have come over the sea from Spain, feel more like historical ancestors, the Túatha Dé feel more like mythological ancestors, who came here from those mysterious “islands in the North”.  “Túatha Dé Danann” is often translated as “The People of the goddess Danu”.  We have no stories about Danu, but her name means “craft” or “crafted one”, so we can interpret “Túatha De Danann” as “The People of Craft”.  While the “Dé” of “Túatha Dé Danann” is translated “goddess” (from “día”, god), it is possible that it may have developed from the preposition “de / di”, from, giving us “The people (descended) from Danu”.  This is purely speculative, and I have no textual evidence for it. Because of the lack of stories concerning Danu as a character, it is hard to pinpoint her role, but since she gave her name to a group of people, we can perhaps call her an ancestress.  It is important to note here that in the Irish tradition, poetry was considered the highest craft, and a poem was a “dán”, a crafted thing.  When the Sons of Mil win the battle to take Ireland in the Lebor Gabála, they must then go back over nine waves and ritually take the land by means of poetry.  This gives us the evocational poems of Amergin. So, in mythological terms, the first recognisably Irish people are those who made things.  Interestingly, this is one of the criteria for dating the origin of the human species, Homo Sapiens, and the way that the earliest humans both made and used tools played a significant role in our evolution. The stories of the Túatha Dé Danann do not easily fit into a historical narrative.  They are not susceptible to a Bishop Usher; it can’t be said that they arrived in Ireland in 4004 BCE on a Tuesday afternoon.  Neither is there a sense that the world or humanity is doomed to destruction.  Humankind are not seen as a “lower” form of existence; quite the opposite.  We are seen as the highest peak of cultural development, in contrast with myths where humans are a creation of an intrinsically superior and prior being or beings.  The Irish stories of the shaping of the land bear some parallels with the Australian concept of the Dreaming; a time before time when features of the landscape are called into existence by creatures which are simply other, not superior or inferior to us.For more on The Dreaming and its parallels with  Irish mythology, see Dindshenchas and Dreamtime. In viewing these Irish stories as coherent creation myths, it is notable that there doesn’t appear to be a creator figure.  They don’t fit with the stories we reviewed earlier concerning the creation of the universe, and in particular, those of the creation of humanity.  In spite of the explicit efforts of medieval Christian scholars to integrate the Irish stories and genealogies with canonical teachings, the stories themselves still resist the influence of any creator-god.

by the Story Archaeologists

Selected examples playfully taken from “Myths of the World: A Thematic Encyclopedia” by  Michael Jordan (with thanks to Diarrhea Man)