Chris Thompson and Isolde Carmody are The Story Archaeologists, and they began working together in 1998.

They began exchanging letters about Irish stories after Isolde read an article on Macha Chris had written for a magazine.  However, it was only when Chris sent Isolde a cassette tape of her story versions that Isolde discovered that Chris was female, not male!  And when they finally met in person, Chris realised that Isolde was in her early twenties, not her late forties.

However, they were soon sharing their mutual interests in stories and conversation, which has since developed into their peculiar art-form.

When they met, Chris was running workshops based on Celtic mythology, and Isolde quickly became integral to their organisation and delivery, even moving west from Dublin to Leitrim, to facilitate the process.

Later, when Chris established a performance arts company, Hit and Myth, Isolde held a central role both in the creation and performance of shows, becoming, they believe, Ireland’s only blind fire-dancer.

They also reckon we are the only company ever to have turned the Lebor Gabála, “The Book of Invasions”, into a theatre production.  This show called, “Once Upon A Time… In The West – The Approximately Five Invasions of Ireland”, toured Ireland in the summers of 2002-3.  This was one of several shows based on Irish myth and legend they created together.

Although Hit and Myth, as a company, later broke up, Chris still gives heritage storytelling shows for families: “Wizards and Warriors” and “Heroes and Superheroes” are current titles.

One of their most pivotal projects was the recreation of the mythical Battle of Moytura at the story’s location in South County Sligo.  This included, not only the battle pageant itself, but also a full retelling of the saga by candlelight, and the creation of a cross-border children’s play and art project, “Strength in Everyone” based on the two prophecies of the Morrigan that conclude the saga.

It was the undertaking of this project that led them to consideration of Irish story as archaeology.  It was exploration of the original Irish texts, required to create the script for the re-enactment, which began to illuminate, for them, the rich artefact-packed strata of significance and meaning in the ancient saga of Cath Maige Tuired.

The festival of Moytura 2000 was an experience in itself, but sin scéal eile….

They have been exploring the concept of story as archaeology ever since.  In fact, they had long been trying to compile their discoveries into book form. In an archaeological dig, no trench, no site can ever be considered to be completely explored.  There is always more to discover.  So it is with the stories.  Every time we return to them, we open a fresh line of enquiry.

Eventually, they realised that a podcast and a supporting blog would allow them the open-ended, ongoing process they required.  Here is a book they can keep growing and changing.

As they have always done, they are happy to give talks, host discussions and facilitate workshops inspired by Irish mythology, and other connected topics.

From 2021, our working lives have begun to diverge and go in exciting, fascinating, but different directions. There are unlikely to be further joint podcast episodes but this page is maintained to support the podcast resources now archived. 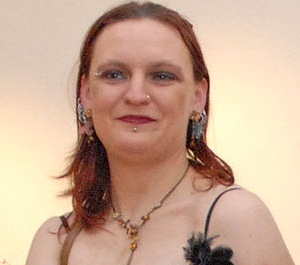 Isolde was born in Dublin in 1977 to a family of professional musicians.  Her upbringing and education included access to books of Irish myths, legends and fairy-tales, family visits to megalithic monuments, and a thorough dinner-table discourse.  She is in the rare position of being at least fourth generation university graduate on both sides of her family.  She began her academic career with a BA in Philosophy and English Literature, and won a scholarship that facilitated her post-graduate studies. As an undergraduate, she led a busy extra-curricular life, involving herself in the Greens and the Trinity Literary Society.

Isolde left her home in Dublin in 1999, and moved up to Leitrim to further her work with Chris.  As their work developed, Isolde took the opportunity afforded by her scholarship to pursue a Masters in Early Irish.  This was only possible through extensive use of Braille and assistive technology to compensate for her life-long visual impairment.  However, the specialisation involved in using technology for a subject like Old Irish, meant that she felt that the degree should have been in IT, not Old Irish!  Her return to the subject now is greatly facilitated by the amount of material now available in digital formats, not least eDIL, the online dictionary of Old Irish.

In the meantime, Isolde qualified as a community drama facilitator, working with Leitrim Youth Theatre, Longford libraries, and in schools and community groups around the North-West.  She has also worked as a professional stage performer, including “Theatre in the Street” performances with Hit and Myth alongside Chris.  She is currently developing a one-woman show, “Mamó”, based on the life of her great-grandmother, Geraldine Plunkett Dillon.

Chris grew up in London during the fifties.  She was born with bible stories, but soon discovered a broader experience of mythology.  In some ways her journey began when she read “The Lion, the Witch and the Wardrobe” at around the age of six or seven, and she has spent the rest of her life going through a variety of mythological wardrobe doors.  She developed a deep interest in ancient Egyptian tales, the earliest epics from Sumeria and even, occasionally, Classical mythology.

Her life changed when she encountered the old stories of Ireland and Wales.  She left her job as the head of an infant school in Surrey to explore this passion for story in Ireland.  Armed with post -graduate diplomas in educational drama and the teaching of mathematics, for which her thesis explored teaching maths through drama, she set off for the new world of Ireland.

For the last twenty years, she has designed and delivered educational projects for schools, libraries and communities, including many based on local history. One major and ongoing area is “Scribing”, a partnership approach to creative writing which encourages children and adults to write together.

However, first and foremost, she is a storyteller; collecting, creating and sharing stories with adults and children, especially the old Irish stories, which are her primary inspiration.

For further information about Chris’s work go to christhompson.info