The 1931 excavation of the cairn on Sheebeg

In our conversation on Sheebeg, we talked about the excavation that took place in January 1931. I thought that it might be interesting to include a few quotes from the newspapers of the time and the only sketch that was made, as far as I am aware, of the interior of the cairn.

The dig was not an official one and it is unfortunate that the excavators dug down from the top of the cairn. this has left the mound misshapen and now partially collapsed. However, reports of the dig make interesting reading.

Sheebeg was always regarded as a place of legend. O’Donovan in 1836 comments:

… the trigonomical point of 479 feet  is the highest point on which is a cairn  … connected with some marvelous fairy legends.

The “gigantic statue” of Fionn, placed there by the Peyton family, was long gone by the time of O’Donovan’s comments. 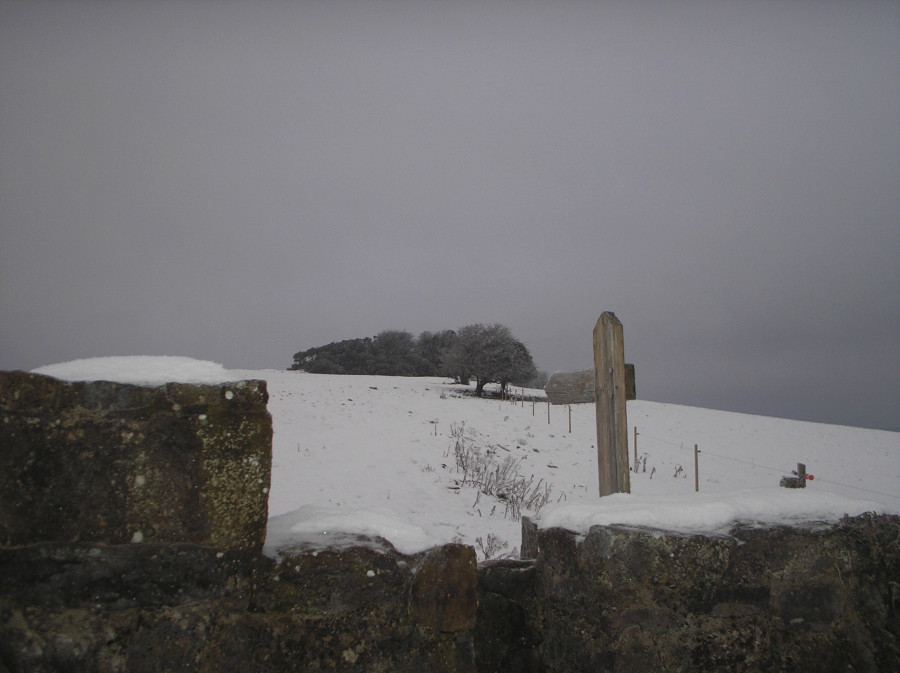 Looking over the stile toward the cairn in the snow

The unofficial dig was begun in January 1931, and caused quite a stir both locally and in the national papers.

A discovery of human bones has been made at Sheebeg near Carrick on Shannon in a mound known as that of Finn McCool. The excavations followed the reading of  historical records by Mr John O’Hara, National teacher, Swanlinbar.

Sheebeg from which five counties and fourteen lakes are visible, has been stated by historians, to contain the remains of a dynasty whose origin is lost in the mists of antiquity.

The report also tells how the news attracted large crowds and that civic guards had to be posted.

As news of the excavations spread, some of the newspapers sent special correspondents to cover the story. From the correspondent of the Irish Times for 6th / 7th of January 1931 comes the following:

Today in company with Mr Connellan, a solicitor of Carrick on Shannon, I climbed up to the mound that is known as Sheebeg, “the hill of the little fairies”.

Below us, the lakes of Leitrim were crowded with skaters, men and boys whose homeward journey from Mass on Twelfth Day was made remarkable by the fact that every lake by the roadside had its thick coating of ice.

The steep spiral of the boreen which we trod was like a sheet of ice and when we reached the farmstead we were glad to stop for a breather. We left this building and by devious routes climbed further up the hill until we stood above the grass covered cairn which tops Sheebeg itself.

Starting  from the top of this mound, the two amateur excavations dug a shaft for twelve feet down and there came upon the hollowed out portion of the shell itself. Within this cavern, a stone slab stood nearly one and a half feet thick and measuring over twelve feet square. It was supported on five stone tapering pillars whose tops seemed to be sunk in sockets in the stone above them. Below was a similar gigantic stone, and on it rested, side by side, the complete skeleton of two people, both facing towards the East.

Local papers breathlessly discussed the possibility of these burials being those of Fionn and Gráinne but, the remains were not examined in any detail and, from the local information that I have been given, were put back into the cairn when the excavation was closed down. 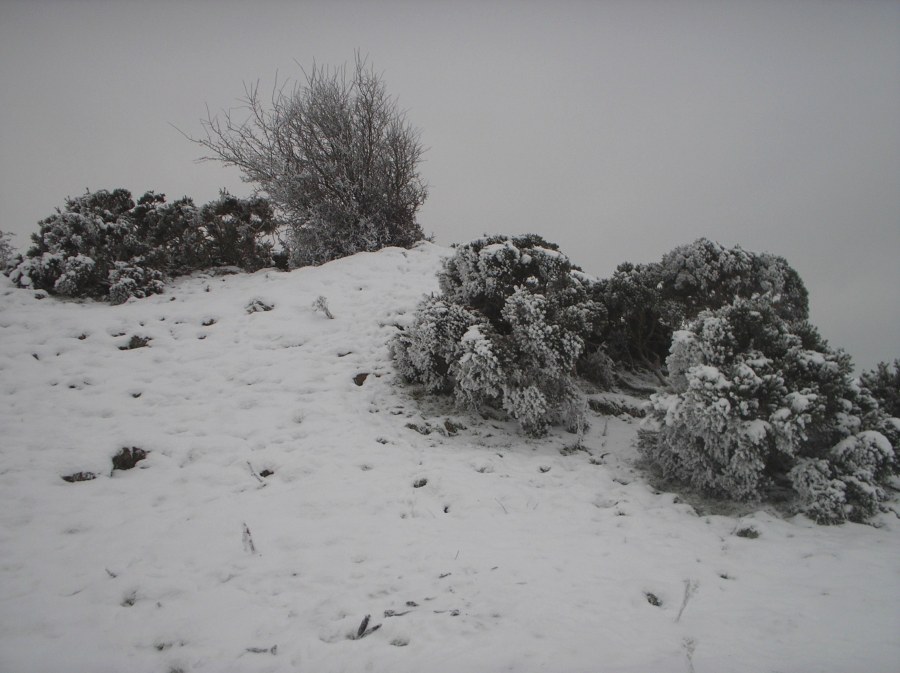 The cairn in the snow

The Irish Telegraph of the same week does report the story of the  man who got trapped inside the cairn under the headline:

In fact the local boy, in his teens, fell in and had a job getting out for the ice. I asked him, now more  elderly but still spritely, what he could remember of the interior construction of the cairn, but he told me that he was more concerned about climbing out than looking around.

The only image I can find of the interior construction is this rough sketch published in The Irish Times on 7th January 1931.

A rough sketch of the interior construction of the Sheebeg cairn

Although the cairn is mythologically significant, it is one of many, (archaeologically speaking), and it is highly unlikely that it will be investigated further in the  future.