An Open Letter to QI

QI is a long-running BBC panel show hosted by Stephen Fry. It is produced by “Quite Interesting Ltd.”, and has become an unofficial source for Quite Interesting facts and exploding General Ignorance. But their research is not flawless… 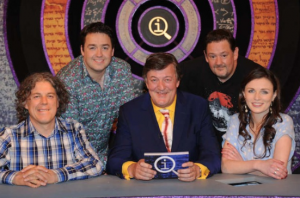 Please can you stop spouting nonsense about Ancient Ireland? I know it’s a specialist area, but we at Story Archaeology are the specialists.

1) The leprechaun as cobbler does not exist in the millenium of literature preceding 1825. We could not find any rationale for this connection, so it may well be the invention of a 19th or 20th century author.

2) They were certainly not exclusively male! This passage from the 16th century story, although expurgated by Standish O’Grady, has the leprechaun queen, Bé Bhó, [pronounced “Bay Voe”, not “Bebo”!] demonstrating her femininity:

Iubhdhán [king of the Lucurpan] was brought out then afterwards and Bébó was left inside in Fergus’s company and Fergus [Mac Léite – king of Ulster] professed great love for her and made love to her. And when Fergus was making love to her, he placed his hand on the crown of her head, and the queen asked him, why he had placed his hand on her head. “It is a wonder to me”, said he “that the manly member in which there are seven fists in length, while you are not even three fists in length, hasn’t come out through your head. And it’s for that reason I placed my hand on your head.” “Ah give over Fergus” says she, “a woman’s thighs can absorb a lot”.

3) The oldest written account of the leprechauns – more properly, lucorpan – is 8th century, not 19th century! They appear in the saga Echtrae Fergusso Mac Léiti, “The Adventures of Fergus Mac Léite”, preserved in MSS TCD H.3.18 and Harlean 432. These are later legal manuscripts that preserve the saga, including its dateable 8th century language, as a precedence for legal decisions.

4) The physical description you cite for leprechauns comes from a single 19th century source, written by an Irish American, D.F. McNally, in “Irish Wonders: The ghosts, giants, pucas, demons, leprechauns, banshees, fairies, witches, widows, old maids, and other marvels of the Emerald Isle”. Every other source, including W. B. Yeats, seems to be a direct quote from this book.

What’s curious about the description of the leprechaun’s costume – the red coat, breeches, ruffs and cuffs – is that it seems to be a satire on the  English military and aristocracy. Quite interesting that over the course of a couple of centuries, this satire on the English colonisers has become a satire on the Irish colonised.

The 8th century saga of Fergus Mac Léite is also the source of another piece of travesty committed by your programme (although you are, by no means, the only perpetrators, it must be said). Back in the 4th episode of the I series, you perpetuated the myth that the ancient Irish would suck nipples as a sign of subjugation. The origin for this “ancient practice” is in the same saga, but it is not therefore a custom. It is, in fact, a parody of breast-feeding, playing on the smallness of the lucorpan (literally, “small body”), and the fact that he is an adult male, as is the king, who is shocked by the incident. It is not appropriate for either of them to engage in breast-feeding, and was A JOKE!!!

The only other mention of this nipple-sucking comes from St. Patrick, who claims he refused to show obeisance to a pagan Irish king by sucking his nipple. However, St. Patrick is as reliable a source for pre-Christian Ireland as Caesar is regarding the Continental Celts.

Despite all of this, we owe you a debt of thanks. In response to “Location, Location, Location”, we dedicated our 2014 Midwinter special to discovering where Leprechauns come from. You can listen to the episode, “A Crock of Old Cobblers”, here: