The Cave of the Cats

…..“There it is, by that house” and we tumble out of the car into the everlasting drizzle. The cave of Cruachán was said to be the most notorious otherworld entrance in folktale and legend. From here, so it was said, the Morrigan once appeared in her chariot, crimson-cloaked, leading the heifer to the brown bull of Cuailnge. This, so it was said,  was the gate that loosed various plagues of otherworld beings into the outer worlds, and here Neera began his quest into the ‘hollow hills’.

At first sight the way in is not impressive. The opening is low and positioned under a small track. But there is a great stone lintel overhung by a verdant hawthorn and the entrance is open.

I have been inside before and know that the path is easier than it looks, although very muddy. However, last time I had no light and could only go so far. Now I have a torch in my hand. I see that my companions are hesitating at the low opening and the depth of the mud, and so I dive right in.

“Come on,” I say from deep down the passage. “It is not difficult.”

My hand slips deep into the mud and squelches into my boots. I try not to remember that the friend who follows me is six foot four.

Now I can see the descending passage clearly. It is a rectangular tunnel well lined with cut stone, even if the floor is dripping with soft mud after the prolific rain. It dips steeply, and then ahead there are stone steps cutting down to a lintelled doorway of dressed stone. Behind it stretches suddenly a great natural cavern, water-washed and wild. It is leaf-shaped and high.

Carefully, watching each step, my companions enter through the portal and we stand together in the cavern. 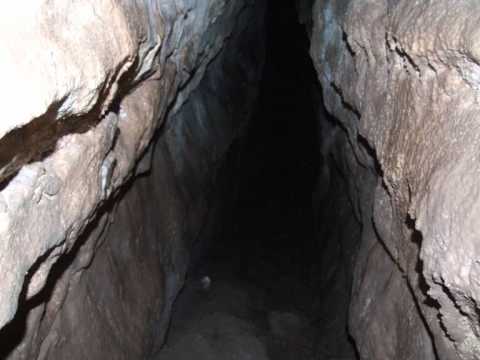 We hold our breath as the cave seems to reverberate around us. Much further along the cave, the floor rises suddenly into a rounded cascade of muddied stone, leaving only a dark opening below the ceiling. It might be possible to scramble up to that crack, but not now. We do not move, for this place is silent and almost disturbing.

I would like to experience the darkness, so I warn my young daughter that I am going to turn off the torch. She doesn’t mind. I click the switch and am dazzled by the sudden darkness. Cloaked in the  blackness the cave seems, no longer, silent., There are  whispers, sounds, words, echoing the  stories that  this Otherworld entrance still remembers.

Shuffling feet, a muffled voice; “A man on the track”. Then from behind me, offering his response to the requested password. “And the heavier is the track”. Is this Nera, tracking the Sidhe hosts on his timeless journeys between the Worlds?

And that sound, a distant grunting, probably nothing, direction is difficult in the darkness, seems to come  from beyond the rock fallen barrier. And yet, there are tales of all devouring  pigs that once surged from the cave, so they say, …in the folktales.

A sudden glow illuminates the cave’s depths. In  the Cattle-Raid of Regamna, the Morrigan came from this cave all regal and red, shining with power.

But not this time. It is us who must return to the mortal World,this time.

With the  renewed torch light, we hand each other through the gate and up into the stone passage, and scramble crouching in the mud towards the lightful world. The mist around us as we leave is thicker. It swirls in the torch-beam, patterning the path. And then we are out, mud-smeared, into the falling rain. We both spontaneously raise our arms to the sky and stretch our exhilaration to the scattering water drops. …..

This cave is part of the ceremonial landscape of Cruachan Ai, Cruachan Ai is one of the most important archaeological sites in Ireland, and the other end of the story that begins at Macha’s Navan Fort. For more information on this fascinating place go to http://www.rathcroghan.ie