The Story Of Macha ~ revisited

Three and a half years on from our first examinationof Macha, I am still happy with my re-telling even though it id a touch fanciful. 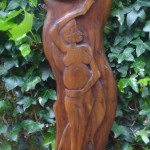 Near Armagh is the green mound of mysterious Emain Macha. This is the story of its naming.

In my mind I still hear the rhythmic drumming of many hooves, the thrumming of the autumn rain. The soughing of breathing beasts, wind in the pasture grass. Flashes of colour, the crimson and gold of my goods and my byres; the gleam of sudden sun on the red alder. But I remember the woman. I remember the sudden vision of her as she came to end my loneliness. I remember the step of her through the long grass, the standing of her in the early morning sun, a silhouette of youthful joy on the hill’s rim, and the poise and grace of her as she moved beneath my roof. She chose me, this beautiful stranger. She chose my house, my hearth and my bed, creating a time of order and prosperity for me. She became the heart of my life but remained a stranger. For even as she carried our child, she would answer no questions but bade me be content, to hold safe this gift between us. “Be still,” she told me. “For we have made together an echo of the Land of Promise, and for a while its magic thrives here. But it will last only as long as you do not speak of me.” And I was content; but I was proud also, and my pride was my downfall. It was time for the feast of Samhain, when all were summoned to the gathering place of Conchobar Mac Neasa. This was a great feast of celebration, but now I was loath to leave my hearth and the woman whose birthing was so near. Yet I would be honour-lost if I should not attend, so I travelled to the king’s feast with the words of the woman wrapping me close. “Say nothing of me and our lives together.” And I said nothing at the king’s board, though all the champions boasted of their deeds and their goods. I said nothing. But that was before the racing of the chariots. When it was time for the king’s horses to be shown before the assembly, I could see that every praise-word spoken had been well deserved. They were tall and glossy, the sun’s beams flashing fire-coal through their sleek coats. They brought to my mind the supple limbs of the woman, their clear eyes, her deep wisdom; their wild manes, the rich flowing of her hair. As I watched them put to their paces, saw them running, all i could see was the beauty of the woman; and in my pride I spoke of her with words of great praise. I told of her grace and her grooming, the speed of her running. I cried out that she could race the world’s wind, and would surely leave behind the king’s horses as leaves scattered by the wind. Conchobar heard me, and was angry at my boasting. So I was bound by the bonds of my words and the bonds of the king, until the woman could be brought before the assembly and matched against the great horses to the testing of my words. And she came, of course, my beautiful woman. She came, even though the time for her to give birth was very close. When she heard that my life was forfeit until she could prove my boast, she set herself to the testing. And she ran. She ran as the clouds race the hunter’s moon. She ran as wind on water, as  waves across sand. Her hair flowed flooding around her. She ran until the horses were left far behind in her wake. Once, she made circuit; carving the course of her running in the land and then, with a cry of triumph and loss, she fell.  Triumph and loss it was indeed for in gaining my freedom, I lost her forever. There, in that place, she gave birth to twins; one as dark as cloud-shadow, the other as fair as the moon on water. No-one aided her in her labour. No-one dared. We watched in awe as she rose, holding the babies high for us to see. She stood tall,  altered, mist-cloaked. Then she spoke. “By your own lore, you noindewell know that the words of a woman in childbirth cannot be unspoken. Now I say to you that I am Macha. I have moved amongst you, bringing prosperity and order, but you have used me ill. “For your lack of pity this day, I lay a noinden of weakness on you at the moment when you most have need of strength. Yet the name I have given to this place I will not take back. Even in defeat, Emain Macha will live on in the glory of the tellers of tales. Great will be the winning and the losing; but at the last, this land will still remember me.” As we watched, shadow covered her, and she was gone. But in the last of the twilight, I seemed to see the shape of a great mare, mane netting the new-lit stars. Then even the imagining was gone, and I was alone. So Emain Macha was named and flamed with her blessing as later it suffered her curse at the time of the great raid of the Bulls. But I, Crummchru, sit here in the ruins of memory, and I dream.  Perhaps the cheering of the warriors is no more than the carrion call of crows, but I am an old man, and the dreams of Macha are dreams of glory.