The Mabinogion and the story of Rhiannon 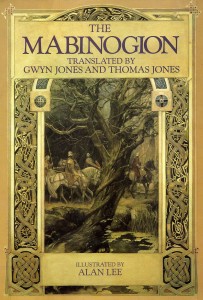 Our podcast Macha – revisited refered to similarities between the tale of Rhiannon and Macha.  . You can read the full story of  Pwyll, son of Dyved and the story of Rhiannon  in a translation by Will Parker,  on his ecxcellent site  Mabinogi.net.

A brief  background  to these medieval Welsh texts

The stories, now known as the  Mabinogion were a collection of oral tales that were gathered together in textual form during  the 12th to 13th centuries.

The first full binlingual version was translated and compliled  by Charlotte Guest in 1849.  This  version  brought them to the notice of an english speaking readership although an English only edition was not published until 1879.

The main collection of stories are divided into four ‘branches’.

Other tales and romances in the Lady Charlotte Guests collection include,

The richly interwoven tapestry of the Mabinogion tales are essential reading for their own sake. There are also undoubted   ressonances between the Welsh and the Irish stories. We frequently find ourselves referencing them,with great enthusiasm,  in the podcast episodes.