The Shannon is the longest river in Ireland and the UK with a length of 280km. The river flows from its source in the Cuilcagh Mountains to its estuary below Limerick. This important river and its tributaries drain some 15,500 sq km or about one fifth of the island of Ireland.

The traditional source of the river is a large spring called the Shannon Pot, about 16m in diameter and has been explored by divers to a depth of over 9m. The spring flows throughout the year and is fed by streams that disappear into limestone rock higher up in the catchment area.

Water tracer experiments have shown that other streams sink below ground and flow underground to join the Shannon Pot and have some claim to being the ultimate source of the River Shannon, the farthest of these being the Pigeon Pots in County Fermanagh.

The Shannon Pot is a beautiful place. It is isolated, hill-ringed and tranquil. It is fringed with trees – not hazel, unfortunately – but mostly the ubiquitous blackthorn. The pool itself is circular, ripples on even the stillest day and is very cold and very deep.  I have several times been into the water, even in February, and can personally confirm its icy freshness. 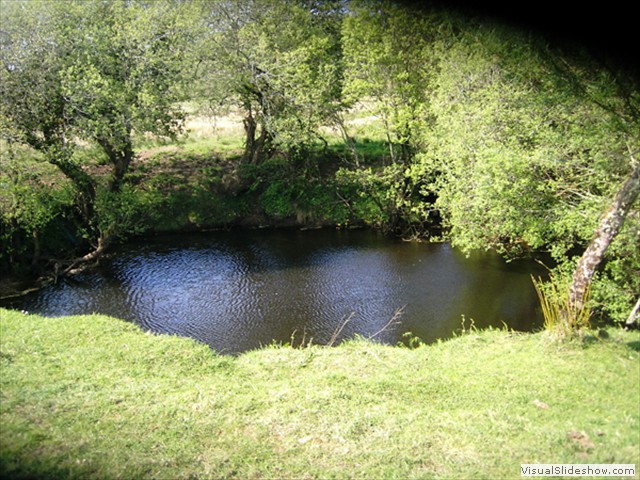 The site has great “presence”. This is partly because of its natural location, but also because of its shape. It feels like a place of great significance. Indeed, it is likely that it was a “votive pool”, somewhat like Lochnashade, (the “King’s Stables”), the pool near to Navan Fort where the wonderful bronze trumpets were found. From the earliest, times gifts honouring the power of the waters have been found in rivers, lakes, pools, springs and wells. The Shannon Pot, set in a landscape of pre-historic sites, is certainly of importance.

There are many websites with information about the Shannon Pot. I would recommend http://www.glangevlin.com for its inclusion of local stories and folklore.

However, it is curious that, while every site mentioning the location gives some version of the Sinann story, all are variants on the version cited by Eugene O’Curry. (Read his version here). There are some minor differences in the given stories:

However, each given version asserts the idea that Sinann was a disobedient girl who angers the salmon or the magical water, and is punished for her presumption.  None of the stories have much in common with the original textual story. All are clearly taken from the somewhat misogynistic interpretation created by Eugene O’Curry in the 19th century. For a full discussion of how The Story of Sinann became so distorted from the version told in the Metrical Dindshenchas, go to our podcast episode Revisiting Sinann.

Stories grow and change. That is their nature. But it is sometimes worth researching the journey they have made.