The Legend of Knockmany Hill – a late tale of Cú Chulainn 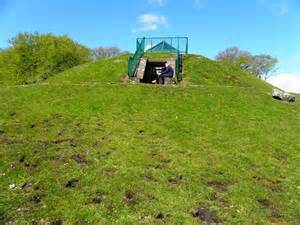 In our explorations of the text of Bricriu’s feast we encountered many passages that demonstrate the story tellers’ art, full of patterning and rich vivid embellishment. The text also contains plenty of evidence for literary collation; versions of the story gathered together for the sake of completeness.

Once stories enter the great library of written material, their creative growth is not over. Motifs that intrigue the audience as well as dramatic or comic episodes, are used, reused and re-interpreted by story tellers as they respond to the mood and demographic of their audience. Little by little, consciously or unconsciously, the sharers of tale, are designing and embroidering the beautiful chaotic patchwork quilt of folk tale.

We have pointed out several examples of this process in past podcast episodes. In ‘The Four Craftsmen’ (series 2 episode 5), we discussed the stories of the Gobbán Sáor that remember the legal trickery of the Dagda and in ‘Corpse Carrying For Beginners‘ we examined a folk tale with similarities to ‘The Adventures of Nera’. These are only two of the many examples we have discussed in the last year.

Cú Chulainn’s amazing and comic feats at Curoi’s fort are remembered in the late folk tale “The Legend of Knockmany Hill” recorded by William Carleton and re-told by many others including James Stephens. This, oral story has, in its turn, become a literary tale but still responds to telling with enthusiasm.

By the time the folktale version reaches a literary form, the two great heroes, Fionn MacCumhaill and Cú Chulainn have become lumbering, and somewhat comic, giants. In this guise, like some Folkloric game of ‘Top Trumps’, they are now set against each other as mortal enemies.

As the story begins, Fionn is up in Antrim building a bridge to Scotland, heaving great pillars of rock into the sea. This bridge, left unfinished at the close of the story, becomes known as the ‘Giant’s Causeway’. When a whisper on the wind,  tells him Cú Chulainn is on his way to  give him a good thumping, Finn takes the wisest course of action and hurries to Knockmany Hill, near Clougher, in  the county of Tyrone. Here his wife, Oonagh, has a cottage on the top of the hill. The hill, to this day,  has an interesting, if damaged, chambered cairn on its summit, which may have aided in locating the legend. When the terrified Fionn arrives on her doorstep, Oonagh agrees to save him from the giant if he will promise to obey her every instruction. Much to his consternation, she dresses him in baby clothes and pops him into the cradle. She then borrows a griddle from her sister, Grainne,  and sets to baking bread. One loaf  hides the iron griddle.

To cut a wonderfully funny story short, the Fionn baby is able to munch on bread that breaks Cú Chulainn’s teeth.  Fionn bites off the giant’s brass finger, the one that gives him his strength, after Cú Chulainn demands to feel the baby’s teeth. Once his strength is gone, Fionn is able to deal with the giant.

One section of the story I generally omit, when I tell this story to young audiences, is the part where Oonagh sets tasks for Cú Chulainn while she pretends to be waiting for Fionn to return. These are reminiscent of the the tasks undertaken by Cú Chulainn with Blathnat. This section of the Knockmany legend is quoted below. It is taken from its eighteenth century version, which was first recorded by William Carleton.

“I thought so,” she replied; “I judged as much; and if you take my advice, you poor-looking creature, you’ll pray night and day that you may never see him, for I tell you it will be a black day for you when you do. But, in the meantime, you perceive that the wind’s on the door, and as Fin himself is from home, maybe you’d be civil enough to turn the house, for it’s always what Fin does when he’s here.”

This was a startler even to Cucullin; but he got up, however, and after pulling the middle finger of his right hand until it cracked three times, he went outside, and getting his arms about the house, completely turned it as she had wished. When Fin saw this, he felt a certain description of moisture, which shall be nameless, oozing out through every pore of his skin; but Oonagh, depending upon her woman’s wit, felt not a whit daunted.

“Arrah, then,” said she, “as you are so civil, maybe you’d do another obliging turn for us, as Fin’s not here to do it himself. You see, after this long stretch of dry weather we’ve had, we feel very badly off for want of water. Now, Fin says there’s a fine spring-well somewhere under the rocks behind the hill here below, and it was his intention to pull them asunder; but having heard of you, he left the place in such a fury, that he never thought of it. Now, if you try to find it, troth I’d feel it a kindness.”

She then brought Cucullin down to see the place, which was then all one solid rock; and, after looking at it for some time, he cracked his right middle finger nine times, and, stooping down, tore a cleft about four hundred feet deep, and a quarter of a mile in length, which has since been christened by the name of Lumford’s Glen”

The spelling is his.

I love telling this story. I have used it in many story-telling and magic shows In one version,  the magician played the part of Fionn. It is also a regular part of my ‘Warrior and Wizard’ Irish story family show. Girls from the audience have been delighted to act the part of ‘Oonagh, the most sensible woman in Ireland’.

I do make a couple of changes. I have never felt comfortable with setting a leading hero from the north against a leading hero from the south. I know Fionn is ubiquitous, but is always strongly associated with the Republic. It seems tactless and unnecessary to name Cú Chulainn. I prefer to introduce the Cú Chulainn giant as ‘the big bully giant’. There are plenty of other well known tales praising Cú Chulainn as a hero.

It remains a great tale, but when I am in story-teller mode, especially to children, I put my folklorist’s  hat away in my metaphoric pocket; although, I  always know where to find it.t.