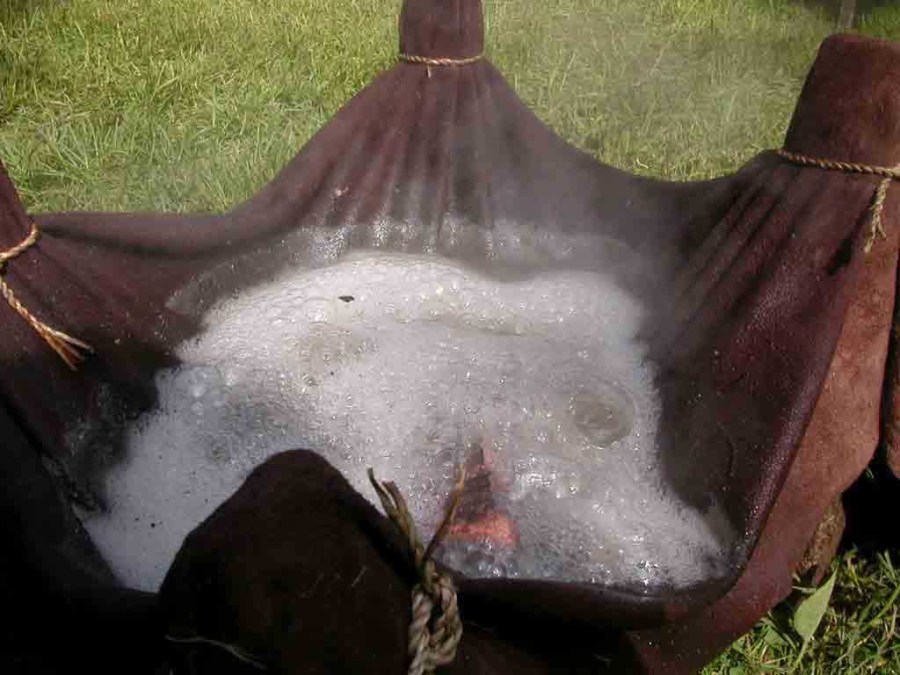 When Isolde and I were preparing to record the episode focussing on the Dagda and his Moytura stories, we knew that  the podcast would be published  in Christmas week. Perhaps this coloured our thinking a little, but when you have a fat jolly man who gloriously indulges in overeating and drinking, who is related to everyone, almost an ancestor figure in his own right, and who has a cauldron of plenty from whom no-one leaves unsatisfied, then to see connections between Dagda and Santa is hardly  surprising.

I was pretty certain that I couldn’t get reindeer into his story, but I thought that I might be able to find Santa’s magic sack.

The Dagda brought, so it is told in the text, the cauldron of abundance from one of the four cities of the north. This was the vessel of ultimate hospitality, something that is clearly central to the Dagda’s character. But what  is the Dagda’s cauldron? If you picture such an object, something like the Gundestrup cauldron comes to mind, solid, rigid, bronze or iron.

However, in the back of my mind I had another image,  that of a cauldron formed from leather.  Buckets  and other water containers were frequently made of leather, but could they be used for cooking? I wondered if they were used in conjunction with the fulacht fiadh, the ancient cooking-places where food was boiled in special hollows with fire-heated stones.

However, experimental archaeology  from “Ancient Arts” (http://www.ancient-arts.org/index.htm) in  North Wales have thrown light on how a leather cauldron might have been put to use.

Before metal cooking pots were available, Iron and Bronze Age people would wrap the meat in leaves, then in clay and put it into the fire to cook. We know this because we’ve found evidence of the clay containers in wetland sites where they’re best preserved.

We’ve also found evidence of the cooking of meat in water by wrapping it in herbs and then in straw rope and placing the bundle in a cauldron of boiling water, heated by hot stones from the fire. Another discovery we’ve made is the beginnings of the beer-making industry. They would have had a leather cauldron – that is, a piece of leather within a basket, tied in with rope and filled with water.

So to make beer, they would have heated the water by setting the cauldron on some hot stones, then added malted barley to create a mash. They must have then poured off the water, left it to stand and ferment, and in six days time they’d have beer. I’m told it’s very nice.

Similarly, the discovery of a possible brewery site, a fulacht fiadh, by archaeologists Declan Moore and Billy Quinn in Cardarragh, Co. Galway, led to the test-brewing of a beer flavoured with plants and herbs. This too was described as “pleasant”.

So maybe the Dagda did indeed have a magic bag, a cauldron of abundance, that held the secret of the brewing of beer.

2 thoughts on “The Leather Cauldron”