The Giant in the Mead Hall 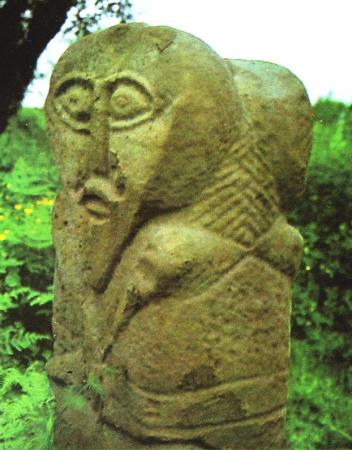 In the flickering firelight of the evening feasting, the shadow of the newcomer filled the whole hall, darkening its comforting warmth.

The man himself was a giant; huge, twice the height of any other.

But he was no noble hero-warrior; no, not this one.

This one wore no garment striped with gold. This one had no broach enamelled and bejewelled. This one carried no fine blade of a sword.

No; this giant of a man wore nothing but an old shabby hide and a cloak of drab dun. His hungry, huge and yellow eyes protruded from his head, and, strung from his meaty fist, each finger curled, thick as a wrist.

But the ugly baclach was weaponed, and well weaponed at that. Strapped to his back and spreading over his head was a great tree-club, full root-hard. In his left hand was a staff, so thick and heavy that twenty yoke of oxen might have found it a burden.

Yet it was the axe held in his right hand that drew the attention of all present. This was the axe of axes; its handle so heavy that only  a full plough-team might have moved it, and so sharp, that a single hair blown in the wind would be severed, should it touch that blade.

And now, the ugly apparition stood stock still by the fire under the roof-fork, the highest place in the hall. There he stood, threatening in his confidence, blocking out the light and warmth from the company.

“Is the hall so mean that you can find nowhere else to stand?” mocked Dubthach Beetle-Tongue, refusing to be daunted. “You’ll make a fine blaze, yourself, if you stay so close to the fire.”

The giant laughed, untroubled by the taunt. “Why then,” he joked, “in that case you will light up the whole hall without having to burn it to the ground. But that is not why I am here.”

The giant looked around him, meeting the gaze of Conchobar, and his voice grew in strength and resonance.

“I have come to this company because you, Men of Ulster, excel in strength and prowess, valour and honour, generosity and worth. I have come to you to crave a single boon.”

Fergus mac Roich regarded the newcomer with a fresh interest. “What is your quest?”

“Can I be sure that the honour of Ulster will respect my request? Do Ulstermen keep their word?”

“And can the honour of a whole Province be lost because one man fails to speak truth?” retorted Fergus, scorn streaking his voice.

Sencha glanced towards Conchobar and then spoke for his king.

“You will find one here who is worthy of you,” he answered quietly.

“Then I will speak,” agreed the giant, looking directly towards Conchobar. “Fergus and yourself, Conchobar, I will not include on account of your status. Apart from you, I ask that I may cut the  head from one of your warriors, allowing him to cut off mine tomorrow night.”

There was a stunned silence.

Then the warrior men called “Fatneck” guffawed loudly. “I’ll take up your challenge,” he grinned, “but we’ll have it the other way around. Bend down, baclach, and I will cut your head off tonight; you can come for me tomorrow.”

“Were that my quest, I could have got it anywhere,” sighed the baclach. “But we will have it your way. You may cut off my head tonight; I will avenge the deed tomorrow night.”

Fatneck flexed his muscles. It was said he had the strength of a hundred, but could he wield the giant’s axe? He reached for it, and took the axe from out of the baclach’s hand. The giant calmly laid his neck across the block. Fatneck didn’t hesitate. He dealt such a blow that the axe stuck, quivering, in the block underneath, while the head rolled to the base of the fork-beam. There was blood everywhere!

Fatneck stood up. He was breathing fast.

Then, to the horror of the hall, the baclach also stood up. He straightened his headless torso and shook his shoulders. Then, without hesitation, he reached down for his severed head with one hand and for the axe with his other. He lifted it, block and all.

In fascinated terror, the company watched the headless giant leave the hall, blood still flowing from the raw-wounded neck.