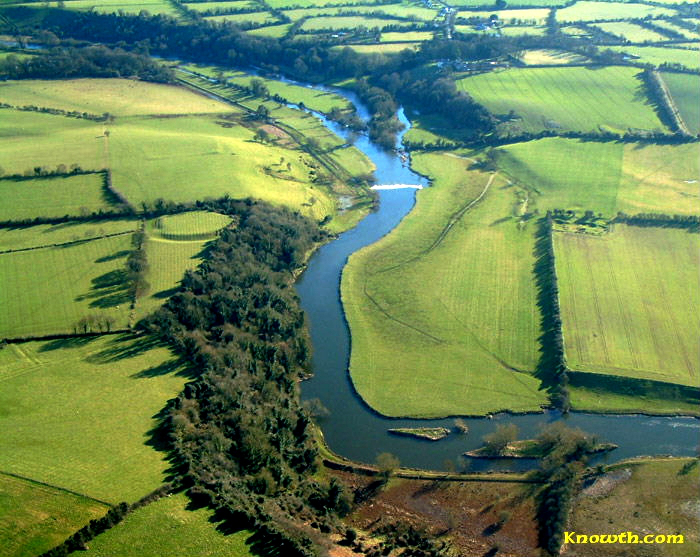 The first Dindshenchas poem we looked at in this episode was the second of the poems on “Brug na Bóinde”, the Boyne Valley complex of Co. Meath which specifically centres on Newgrange.  We didn’t go through every stanza in the episode, since there were some for which we could find no further information.  If you know something about the characters, places or incidents mentioned, why not let us know by leaving a comment?

The English translation here is by Chris, and is more properly a translation of Gwynn’s English! It has been translated for readability, so occasionally leaves out a “cheville” (a stock phrase used to complete a line of poetry in accordance with the syllable count and rhyming scheme of a particular metre), where nothing much is added to the sense of the poem.  Indeed, these are often the most difficult to translate well, as their function within the poem is mostly about the sound and rhythm of the words themselves.  Where there is such a mis-match between the Irish and the translation, I have bracketted the relevant word or phrase.

O nobles of Breg, with your honest strength,

Your deeds worth the telling,

Do you know the tale of every monument

Here in the Brug of the Mac ind Óc?

Here before your eyes, is the famous fairy mound;

You can clearly see, it is a king’s dwelling,

It was built by the diligent Dagda.

It was a shelter and a safe strong keep.

Do you see the Bed of the ruddy faced Dagda?

A soft slope it is, lacking rough ridges;

After the chase, he courteously courted

A fair and ever-youthful woman.

Let us view the Two Paps of the king’s consort

Here beyond the mound, west of the fairy mansion:

The spot where Cermait the fair was born;

It lies directly on your path, hardly a step away.

To an assignation with the Dagda,

ocus in cú in a díad,

Her dog followed after her,

Even though the journey was long for them.

To carry away a baby prince, it was a happy outcome;

For he bore the Mac ind Óc from the ford,

Shielded, protected, although he was weary.

It turned out to be a wise decision,

For the boy, nine full years after,

At his demand, was brought to his father,

To the well-loved Dagda, at this house.

The king provided entertainment for him

In the mound that, if you know your story lore, gained its name through most effective trickery:

There is plenty of information available, if you go and look for it;

Everybody knows about Duma Treisc.

You will remember how the Dagda sternly refused

The request of the holding’s owner to remain. Still, it didn’t go badly;

He went off grumbling, to live in Ochan,

After some hostile posturing, and a good deal of drinking.

View the Grave of Esclam, a popular pilgrimage,

His was a field of honour, his achievements well known,

For the son of Calpurn, his path was one of grace.

Do you recognise the Well of Bualc the good?

Esclam’s successor across this plain,

From this well, he provided fresh water

For the warrior host, a deed for which he is held in honour.

Do you know about the Grave of grim Cellach?

There was wild wailing filling the air,

While in the north on a fool’s errand.

And do you recognise the Grave of King Cináed’s Horse?

He was a most willing and great-hearted beast;

Who gained victory from the swiftest of the bridled ones

He raced at the will of noble Irgalach’s son.

The Comb, the Casket of the Woman,

Wherever each treasure is hidden.

It shall remain until the Day of Doom,

Next, here before you – it was the boast of every bard –

Is the grave of a famous man,

Whose memory still bears witness to his rugged race,

This is the hill-slope mound of Áed Lurgnech.

This chief brought bloodshed to

His territory of green rolling ridges:

Then followed a general vengeance of the tribes

In the place where the great Morrigan was bested.

Tales of this place should be well known to you all;

Scores of chiefs have seen their deeds sung

On this plain of bright action, where shields were wielded,

Here, too, was the famous Prison of the Grey Steed

You will recognise by the debris of skulls

The glen where the sluggish Mátha dwelt;

It was slain after the skilled hosts battled with it

Afterwards came – everyone knows this story –

The kings from all the fertile lands around,

To view the vast Mátha,

Each marked the killing-ground with a stone.

In the place known as Finn’s Seat.

Yet, he did not survive the encounter;

a chend for Maig Murid mind.

He left his head on the plain of Muired Mend.

You will have heard of the mighty Ulstermen

From Conn’s half of the country,

To strive with the strength of the slow moving Mátha

So his limbs were broken on Lecc Bend.

A solid cairn was built by the host

as a rampart over the bones of the beast;

That was the memorial to the sad event

There is the Cashel of Oengus the blameless –

It was there that the son of Crundmáel suffered the pangs of guilt,

After he had drunk himself to madness on strong mead.

Remember the right royal contest at the Road

Well, that is when mighty Midir was injured;

Do any of you recall the full story?