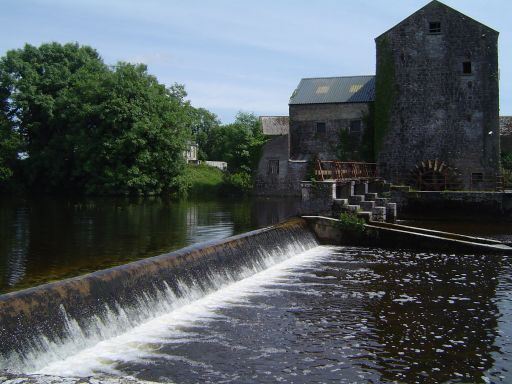 These poems were posted as part of “More Poems about Sinann”, a companion article to Series 1: Mythical Women – Episode 1: The Story of Sinann.

Any names or words with notes appear in bold, and the notes are at the end of both texts.

The Ford of Find’s Stone, from what is it [named]?

Why does no historian name it?

What is the forgetting that has blinded us

since Find left his stone there?

When there fell – great was the battle –

Including the three victorious sons of Cirb

who came along the stream from the north-west:

When there fell in the ford

his face toward the cry of the over-matched:

He felled, where he stood at bay,

When he assailed the ford from the north –

When he was slain – the cause of the story –

It put the troop into a heavy cloud [of despair]

the loss of the son of Conna from Mag Lir,

whom Find slew that morning

When Setna uttered after that

that the faith of true battle should be waged

When Sinann came after that –

Daughter of Mongán from the fairy hills –

She gave a stone with a golden chain

Then Find stretched out his hand

for the strong three-sided stone

of Guaire Goll who carried it,

That he would not use (fierce his onset)

Anything but spear or sword or rapier:

it was one of his gessa after that,

Then he hurled it [the stone] into the ford

when his battle-frenzy came upon him:

Were killed by that [cast].

So it came to rest then

in the full, broad-green pool,

until it be cast upon the shore

on a Sunday at the hour of matins.

A girl will find it that morning,

whose name is Lady of the Wave:

she will put her perfect foot

upon the hoop of red gold.

A space of seven years after that

Until the edge of Judgement Day:

never have I been found amiss:

that is the history of the ford.

let the historians enquire for us

what forgetfulness has blinded us

[since] the time when he [i.e. Find] left his stone there?

There was a battle -famous march –

and a warrior of the northern region,

the daughter of noble [.it. “free”] Mongan of the Síde,

and gave a stone with a golden chain

Then Find laid the keen stone,

in the battle, on the shoulders of Guaire Goll,

until the ennumeration of his company was completed

[it took] from day-break to afternoon.

He shouted from the northern side –

he twisted [?] his shape, famous hero-wounding

that strong hound-head of great fury.

Then Find stretched [out] his hand

and took the stone that was on the shoulders

Of Guaire Goll who bore it.

There fell in the ford

Find hurled his stone into the ford

When his battle-frenzy came upon him:

Bran and Senach and Sen

Were killed by that [cast].

The stone fell in the pool

where generous Find’s honour was made

After which no one may find it –

is that not the precious treasure?

A girl will find it – famous union –

Whose name will be Lady of the Wave:

She will put her perfect leg

through its hoop of red gold.

When she draws it up after that –

that stone with its loops [i.e. chain] –

when she leaves it on the shore

on a Sunday at the hour of matins;

Seven years after that – famous fulfillment –

until the day of judgement

So that is the action from which comes

As with so many Dindshenchas stories and poems, there are two poems on Áth Líac Find.  They agree in most of the details and even the language, but there are some differences in personal names.  Where there is such a difference, this is included in the notes below.

“The Ford of Find’s Stone”, Athleague or Ballyleague, the Western part of Lanesborough, on the border of Counties Roscommon and Longford. Athleague is the ford over the Shannon on the Roscommon side, where the river entersLoch Ree.

Literally, “Lady of the Wave”.  Bé is an honorific form of ben, “woman”, and is especially used of Otherworld women.  When discussing “The Story of Sinann”, we were struck by the image of a great wave coming from the sea and covering the land, thereby changing its shape.  That story was a kind of “Creation Story”, whereas the story told here is of the end of the world (see láu brátha etc. below).

“Hero-wounding”. Gwynn translates this word as “meeting”, quite arbitrarily, presumably dismissing the phrase as an unimportant “cheville”.  I have taken the word as a compound of caur, “hero, warrior”, and ail, “misfortune, wounding in battle”. It’s not a perfect analysis, but the best I could do!

Find Mac Umaill, often Anglicised as “Fionn McCool”, the legendary poet-seer, hunter and warrior-chief of the Fían (“hunter / warrior band”).  His name, Find, is very ancient, meaning “fair” in the senses of “white” and “just” (see the article, “Many Shades of Darkness”).

There will be an entire series of Acallam na nÉces on this fascinating and important character, so watch this space!

The “enemy” of this piece is Fland, son of someone with red eyebrows (abrat-rúad).  I think there is a Eochaid Abrat-Rúaid named elsewhere, although I haven’t found the reference so far.

The word gúaire has two seemingly incompatible senses.  The first is in relation to “bristles, animal hair”, while the second is an epithet meaning “noble”, particularly applied to prominent persons known for their generosity.  The second element of the name, goll, means “one-eyed”, particularly of someone who has lost an eye in battle.  In many of the stories of Find, his friendly rival is Goll Mac Morna, and this “Gúaire Goll”, on whose shoulders the peculiar stone is laid, may be a tongue-in-cheek reference to Find’s ubiquitous rival.

Both these terms have the literal meaning “day of judgement”, with the former term the more usual expression for the Christian “end of days”.

Leinster, the Eastern province of Ireland, or the Leinstermen.  Many terms like this can stand for both a geographical region and a population group.

“The Plain of Lir”, a term for the sea. Lir is a mythological character associated with the sea, but appears more as an ancestor than as a character himself.  For example, Sinann is described (see “The Poems of Sinann”) as a daughter of Lodain, who is elsewhere given as a son of Lir.  The word lir has the implication of “numerous, multitudinous”, and is used as a poetic word for the sea in its own right.

These are the three killed, apparently accidentally, when Find throws the stone into the ford.  The name Bran means “Raven”.  The other two, Sen[chán] and Senach, have names that are virtually identical, with meanings like “[Little} Old One” and “Elderly”.  Both are relatively common personal names, and many saints bear these names.  Indeed, there are supposed to be twelve saints, all called Senach, associated with an island in Loch Ree itself… more on that to come!

It is clear from the context that this is the same person, and only the Sinann who gives the river its name bears this name.  Her name seems to mean “Flowing One”, with particular relevance to the flowing of milk (see “The Story of Sinann”).  She is here given as daughter of Mongán, “Little Hairy One”. Mong is head-hair, locks or tresses.

The alternative name, Sideng, is more obscure.  The best I can manage as a meaning is “Silken” from síta, “silk”.  The combination of “flowing”, “tresses” and “silk” seem evocative of the great Shannon river flowing over the ford at Athleague.