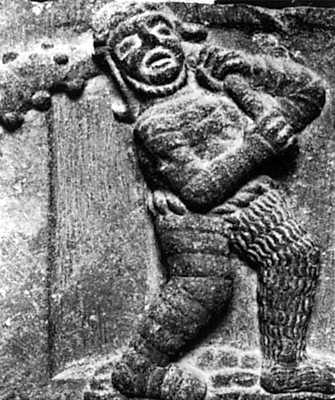 Who is Ogma and what is he doing in the saga of Moytura?

For a start, he is recorded as the Dagda’s brother, and his main role seems to be “The Strong man”. When Lugh arrives at Tara, the gate-keeper gives him that title rather than that of warrior. He proves it later by throwing the flagstone through the wall. Lugh, being Lugh, of course just lobs it back.

Before that, Ogma has been badly affected by Bres’ misrule and forced to carry firewood, becoming weakened through lack of food.

Later, he offers to act as strong-man again, and says he will defeat a third of the Fomoire army single-handed.  During the battle, he finds Orna, the sword of the Fomorian king Tethra, which recounts the deeds done with it when unsheathed.

And that is about all. He is referred to as Ogma Sunny-Face, and it is said that he invented the Ogham script and is associated with eloquence.

But the Dagda himself is described as equally strong and powerful.  He is an earth-mover, builder and shaper who marks out ditches and boundaries with his great club. It would have been typical of the Dagda to start flinging flagstones in a competition with the young upstart, Lugh. He had a sense of humour, did the Dagda.

The Dagda, too, is weakened by Bres’ mean lack of hospitality. However, Dagda takes action, tricking the satirist, Cridenbél, into swallowing gold, and bringing about the false judgement that leads to Bres’ downfall.

Even Ogma’s eloquence is matched by the Dagda, who is known for his wisdom and quick wit. He is the master of the rapid riposte, and whatever he says must be judged as true.

So what role does Ogma play and why is he there? It is almost as though the strong man with the quick wits is doubled. Everything that Ogma does is matched by the Dagda.

The Dagda seems to be a wholly Irish character, whereas Ogma  was familiar to the continental Celts as Ogmios. Ogmios was recorded by Lucian, a satirical writer  from around 2 AD, as resembling an older version of Heracles, the Greek strong man. Ogmios and Heracles both wear lion skins and carry a bow and club in their hands. However, Ogmios is depicted with long chains through his smiling mouth that pierce his tongue and attach to the ears of a group of men who follow him, drawn by his powers of persuasion. He was also known to preside over the power of cursing and tablets with his curses have been found, particularly in Austria.

In the saga of Moytura, Ogma makes no use of such powers and there is no reference made to them. It is the Dagda who is the master of language and persuasion.

Ogmios may also have some connection with old age. There is a linguistic connection between Ogmios and the Welsh Eufydd ap Dôn; Birkhan gives the progression of Ogomios/Ogumios > Ogmios > Oumid > Euuyd > Eufydd. He may also be connected to Hefydd Hen (spelled Heueyd Hen in the manuscripts), father of Rhiannon, whose epithet hen means “old”–again, connecting to Ogmios’ depiction as aged.

The Dagda is neither old nor young. Certainly, he is the father of the “young son” who frequently appears as his confidant, sharing ideas and verbal tricks. But the Dagda himself is portrayed as virile and full-blooded, especially in Moytura where he meets and mates with both his “woman”, the Morrigan, and Indech’s daughter.

It is possible that Ogma was added into the story of Moytura as a type of the Dagda, and therefore his brother. But Ogma, the strong man, is not our wonderfully endearing, ugly, beautiful jolly green giant.

Shhh! I think it was the Dagda who threw the flagstone and made that dirty great hole in the wall!