In the episode “Dindshenchas: A Magical Mystery Tour“, we discussed the dindshenchas story of Áth Clíath. It concerns the destruction of the great beast that created the Boyne Valley.

Now, there may be no Irish dragons, but there are plenty of tales of water beasts, the ollphéists. We mentioned a few  in the podcast episode.

I think we might have left out one of the better known ones, that of the péist of Lough Ree. Its most recent sightings date from as late as the 1960s when it was seen by several respectable clerical gentlemen:

“It was moving. It went down under the water and came up again in the form of a loop. The length from the end of the coil to the head was 6 feet. There was about 18 inches of head and neck over the water. The head and neck were narrow in comparison to the thickness of a good-sized salmon. It was getting its propulsion from underneath the water, and we did not see all of it.”

Other water monster legends to be found in Ireland include:

Talking of the famous Colmcille, there is a legend that he banished a ferocious “water beast” to the depths of the river Ness after it had killed a Pict and then tried to attack Colmcille’s disciple. The story is told in “Vita Columbae” Book 2.

Isolde reminded me that some years ago I developed a series of light-hearted gentle spoof hagiographies for St. Patrick’s Day family storytelling shows.  They included an unusual version of St Patrick and the Guiness bottles, St Lassair and the garden claw and the story below.

The bones of the story respect the legend. The rest is my invention. 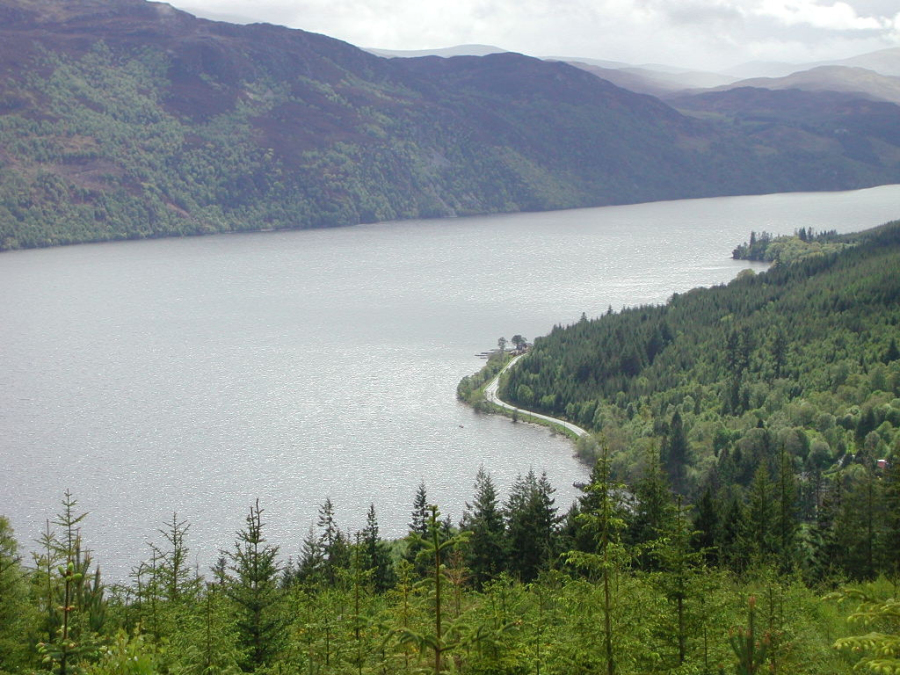 St Colmcille and the Water Monster

Long ago in Ireland, in the part of the land of Saints and Scholars known as Donegal, there lived a man called Saint Colmcille.

Well, he didn’t begin life as a saint, of course, but he soon became a good scholar.  Mind you, he had a head start. Not only was he born the great-great grandson of the famous Niall of the Nine Hostages, but he even had a saint for a foster-uncle and his first teacher.

Later, he went away to school in Moville, where he was taught by St. Finian himself. Finally, he studied at the monastic university of Clonard, which had the reputation for training up the best-qualified Irish saints in the country. He even planned a gap year in Rome, but only got as far as France. There was just so much work to do for a saint and scholar in Ireland.

Colmcille had grown up to be tall and strong and with an extremely loud voice. It was said that you could hear him speaking all the way from one hill to another. It was quite impressive. But that was Colmcille. He was a man of action as well as a saint and scholar!.

For a while, he travelled around Ireland founding monastic settlements as he went, but adventure was following close on his track. And this tale is all about one of his most exciting adventures.

It began with an argument over a book. Fights over copyright issues are common enough these days, but you might not realise that it went on in Colmcille’s time. Well it did, He copied a book of St Finian’s or something like that and the saint wasn’t happy. Well, it lead to a quarrel and then to a bit of a battle, and the upshot of this was that Colmcille left Ireland.

Colmcille became famous in Scotland and founded one of the most famous monasteries on Iona, but our story is not set on that special island. No, we are going further east to where a rapid river runs into a huge Loch, not far from the town of Inverness. It is a great place to take a holiday. There are wonderful fresh walks around the loch with plenty of time to enjoy the mountain views and the sparkling water.

Perhaps our sainted scholar was there, taking a well-deserved holiday, walking along the river from Invergarry towards the waters of the long lake. We can picture him stretching his long legs, meditating on the wonders of creation and munching a juicy apple as he went.

As the Loch opened out before him he was stopped in his tracks. For there, on the narrow path ahead of him, completely blocking the way, was a hideous beast. It had a swollen body, ghastly green and knobbly gnarled. Its neck was long and spiked carrying a small head with wicked yellow eyes and razor sharp teeth. Its heavy legs were wide set and squat, and magnificently talloned and clawed, while the long tail swished impatiently.

For a long moment, saint and beast regarded each other warily and then the saint calmly drew another rosy apple from his pouch and held it out to the monster.

“Well met beastie,” he said, keeping his eyes firmly on the creature. “Would you like an apple?”

His eyebrows scarcely lifted when the monster replied, “I don’t eat apples.”

If Columcille was surprised that the beast could speak, he didn’t show it. He gently reached into his pouch and brought out a small bundle wrapped in a cloth.

“I have a little bread and cheese if you would prefer.”

“I don’t eat bread and cheese.”

Again, Colmcille reached into his pouch, bringing out another small parcel.

“I have a small honey-cake I was saving for later.” The monster’s voice was now a low intimidating growl.

Colmcille, he didn’t worry, he didn’t hurry. He didn’t even get flustered. He just thought carefully. Finally, he voiced the terrible question.

The water beast seemed to grow in front of his eyes. Its yellow eyes glittered.

“YOU!” The word exploded like a bellows blast, almost blowing the saint into the Loch.  The creature took a step forward. Colmcille realised that it was capable of moving very fast on those short, sharp legs.

“Wait!” The saint lifted his hand in a gesture that seemed more benediction than defence. “If you are to eat me, one of the saints and scholars of Ireland, then you must prove yourself worthy.”

Colmcille, recognising his chance, continued. “We must have a competition.” He pointed to a distant lightning misshapen tree. “Now, you look to be a fast runner.”

The monster nodded growling his agreement.

Colmcille took no notice but went on. “Let us race to that tree. You may eat me if you win.”

The creature growled again and prepared to run.

Now, Colmcille may have been a saint, but he wasn’t about to become a ready meal for a monster. He was also scholar enough to know that he couldn’t win the race either. No, he was preparing to run as fast as he could in the opposite direction.

“On your marks, get set, GO!” Colmcille had hardly taken a couple of steps away from the creature when the péist had reached the tree and was back. The beast was fast!

Colmcille, he didn’t worry, he didn’t hurry. He didn’t even get flustered. He just thought carefully. He held out his hands to the drooling creature and spoke as calmly as before.

“I am sorry,” he said, as if nothing had happened. “I made a mistake. You are a water beast, of course. It is a swimming race we should have had, not a running race. I wasn’t being fair.” He pointed to a distant rock far away in the loch. “If you get to the rock first, you may eat me.”

The beast was in the water, had reached the rock and returned before the saint had gone three steps. This time, it didn’t even bother to climb out of the water, so sure it was of its superiority.

“Now play fair,” it growled. “Jump into the water and let me crunch you up.”

The saint, seemingly untroubled, stepped towards the water’s edge. Then he stopped as if in thought.

“I have still done you an injustice,” he smiled gently. “For a beast as noble as  you, swimming in a straight line is hardly worthy of your prowess. The competition should have been to see who could swim in circles.”

Immediately, the creature began to flap and float in perfect circles.

“It would have to be fast circles, of course,” went on the saint, as if he was unaware of the water beast’s actions. The monster was showing off. It began to turn in tighter faster circles. Finally, it was swimming so rapidly that it was almost a blur. Its spiky tail was dragged down deep into the muddy depths. It hardly even noticed when the barbed tip of its tail reached the rocky bottom of the Loch and went on going, spiralling down into the rock, like a corkscrew into a bottle.

Colmcille just calmly stood and watched until the monster tired of the activity and stopped its dizzy whirlpool motion.

“That is enough,” growled the oillphéist a little out of breath. “If you won’t get in the water, like a good sport, I will come out and get you.”

But when the creature tried to get out of the water, it could not. Its tail had it firmly anchored to the bottom of the Loch.

Colmcille raised his hand again and this time it was definitely not in benediction.

“Water beast you are, and water beast you will remain,” he thundered. “Never again will you threaten man or beast upon dry land.”

And he turned upon his sandaled heels and strode away, back to Iona and many more adventures.