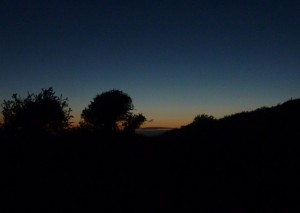 In primary school,  I was very confused to learn two different Irish words for “green”: glas and uaithne.  I knew there was a difference, but I wasn’t clear what that difference was.  As my schooling continued, more confusion arose: black people were referred to as daoine gorma, “blue people” (according to the dictionary) and animals such as deer and cows were described as glas, which seemed to mean “green”.

I’m not sure now how I came to develop the theory of Irish colour-words being more concrete than abstract.  It may have come from learning, as I studied Old Irish, that flann was said to be the colour of fresh blood, and ruad the colour of dried blood.  I began to wonder whether glas might be the colour of the sea, which can range from gun-metal grey to deep azure to mossy green.

In Aberystwyth in 2004, I was thrilled by a paper given byTatiana Mikaelova from the University of Moscow.  She had studied a poem appearing in Saltar na Rann, which mirrored a prose section in the prologue to the Senchas Már, both of which described the colours of the winds.

Many cultures across the world associate different colours with the four cardinal compass points (north, south, east and west).  These Irish texts gave twelve directions, two intermediate directions between each cardinal point.  This reflects a system found in the Old Testament, but the particular colours attributed to each direction differs in the Irish version.

As Mikaelova discussed the colour attributed to each wind, she went into the etymologies and Indo-European roots for each colour word.  This was when I got really excited.  The words seemed to reflect a concrete conception of colour (glas really does refer to the sea), as opposed to our modern conception of colour as a range of frequencies on the spectrum of light (such as the colours of the rainbow).

There is such a breadth of meaning to be explored, that I can only go into a tiny fraction of it here.  I’m going to discuss two themes in some depth: colours of light and darkness, and colours of the waters.  At the end of this article, you will find two lists of colours with quick translations (in the style of paint colour charts!) to whet your appetite: the colours of the winds / directions and the colour-ogam from the medieval Ogam tract.

Colours of the Waters

As I indicated above, glas does refer to the colour of the sea, although its root meaning refers to “cold”.  It can still be confusing to understand why some Old Irish texts refer to something as glas rather than gorm and vice-versa.  Both are used to refer to foliage, horses and human skin-tone.

Part of what distinguishes gorm from glas is in their figurative use. Some of these would translate quite neatly into English: gorm can be used for a gloomy or depressed mood, just like “blue”; and glas is used to mean “fresh” or “young”, as we might use the term “green”.  But it is poetic use that hints at their essential difference.  If a poet refers to someone or something as gorm, it carries the meaning “illustrious”, “splendid”, whereas glas is more likely to imply “pale” or “neutral”.

I see the root difference as the difference in colour quality between the sea and the sky.  The sea reflects the ever-changing palette of the sky, but the reflection is of necessity paler than the original.  Gorm being “sky-colour” and glas being “sea colour” accounts for both the similarity in their ranges in the spectrum (from deep greens to silvery blues), and for the difference in intensity in the way the two words are used.

Another water-related colour word is odor.  Most often, you will find this translated as “dun”, and there is evidence to suggest it was understood as such by the early Middle Irish period (900 – 1000 BCE), if not earlier.  The colour, understood as “dun”, most famously applied to a pet cow supposedly belonging to St. Cíarán.  Though beloved of the saint, the little dun cow nonetheless ended up donating her hide for vellum, which ended up as the important manuscript still known as Lebor na hUidre, “The Book of the Dun Cow”.

Odor and its diminuitive form, Odrán, is used as a personal name, perhaps for folk of a yellowish or sallow complection.  This is the root of the famly name, Maguire < Mag Uidhir.  Howevr, Odrán also appears as the name for a drinking horn, and a saint Odrán is listed in the Féilire Óengusso  on October 27th.  Interestingly, this Odrán is described as snámach, “swimming”, so in the Old Irish period (700 – 900 BCE), they may still have had some inkling of the original meaning of odor.  It comes from the Indo-European root *udros, “watery”, and M. A. O’Brien (ZCP Vol. XIV, p 325) proposes the following development of the term.  From the meaning “watery”, the adjective odor then was used of the otter, doburchú, “water-hound”.  Otters were also sometimes just called odor, and this may be the root of the English word “otter”.  However, odor then became the colour of the otter, so then meant “dun-brown”.  This is one of my favourite etymological histories!

Another colour word often associated with water is find (Modern Irish fionn).  The word itself seems to mean “bright, fair, white”, as well as “fair” in the senses of “beautiful” and “just”.  It is often used of what we would call “white water”, a fast-flowing river or stream.  Indeed, the river Finglas (Findglas) in Co. Kerry, where Bláthnait escaped from Cú Roí with the help of Cú Chulainn, is both find, “white”, and glas, “sea-coloured”.  While find does not appear to have a root meaning associated with water, it is much more likely to be used to describe flowing water than a seemingly similar word bán, “white”.

Along with find and bán, the word gel is often used of things we might call “white” or “bright”.  Gel is more usually translated as “bright”, and is most especially used of something that either emits or reflects light, such as the sun and the moon.  Find, as I said, is used of fast-flowing water, or of someone with a fair complection or fair hair.  Bán seems to carry a sense of “bloodlessness”, and is often used in opposition to derg, “bright-red”, a colour of blood, activity and vigour.  So these three words which could all be translated as “white” refer to very different classes of colour-source.  Gel is about a radiance of light; Find is about something in nature that is bright or white in itself; and Bán is about something pale or wan that might otherwise appear in a more vigorous colour.

Then we come to the many shades of darkness.  In the poem about the winds from Saltar na Rann, six of the twelve winds are said to have dorchi datha, “dark colours”.  Those six are odor, liath, cíar, dub, temen and alad.  Odor, as we have seen above, was originally a colour of water, but became “dun”, which could be seen as a “non-colour”, or at least a “non-bright colour”, which is another way of understanding dorchi datha.  Of the rest, liath seems easily translatable as “grey”, having specific application to the grey hair of older (and supposedly wiser!) people, and to the grey colour of the brain.  I have an image of the brain swelling with knowledge so much as one gets older that the “grey matter” begins to leak out of the scalp and colour the hair.

Alad is also a relatively uncontroversial colour-word.  It is most often translated as “pied” or “piebald”, but I think it has a subtler meaning.  Many animals are described as alad: horses, dogs, birds, sheep.  It can be tricky in some contexts to distinguish the sense of alad from the sense of brecc, and in some contexts they are combined as aladbrec[a].  However, only brecc seems to apply to the speckled trout, which is still breac in Modern Irish.  It would seem that brecc refers to something spotted, speckled or patterned, whereas alad has more the sense of being mottled or dappled.  Alad is even used in a poem appearing in the Book of Leinster to describe a horse in comparison to the land; alad úane, “mottled and green”.  There is the suggestion that the mottling or dappling could be a quality of mixed light and shade as much as an alternation of colours on an animal’s coat.

The hardest of the colours of the wind to distinguish one from another are cíar, dub and temen.  Each is commonly translated as “black”, “dark” or “gloomy”.  Of these, the most straightforward is dub, which is still used in Modern Irish as dubh “black”.  It is used to describe the dark coats of animals,the sloes on a blackthorn, and a person with dark hair or skin.  It is also used in the moral sense of “dark” or “nefarious”, and to convey a sense of gloom or murk. It has even been used to describe a blind person, presumably imagining that since a blind person sees no light that what they see is darkness.

Cíar is somewhat more intriguing.  In most respects, it seems to have the same usage as dub.  There are two notable exceptions: the first remains obscure, which is a legal reference to cíar as a class of woman.  It is hard to work out from the context what this might signify.  The second is more telling: in the Táin Bó Cualigne, there is a description of a red bowl or cup described as cuach cera.  If cera is indeed a form of cíar, then what it may be describing is a vessel made of jet.  Jet (lignite) is a kind of mineralised wood, and so can have a range of colours from dark red to deep black.  It can also have a metallic sheen or quality.  I propose that this is what is referred to by cíar.

Temen is, to my mind, the most interesting of all.  It is again used in many contexts where it seems indistinguishable from dub or cíar.  However, it can carry the sense of an enveloping darkness by which one is concealed.  There is another form, teim, that is used in Bérla na Filid, the specialised language of the poets, to mean “death”, and possibly even a verb, temaid, meaning “to die”.  My “paint colour” translation for temen is “The Veil”, as I think this conveys both the sense of enveloping darkness and concealment, and the veil through which we are said to pass on dying.

Colours of the Winds

Here are the colours listed in the  Dathogam, “Colour Ogam”, in the Ogam tract in Auracept na nÉces.  I should point out that the Dathogam is a medieval text written by scholars who no longer understood the language or the system of the original Ogam, and they are essentially trying to come up with an “alphabetic” list of colours. [For more on Ogam and the medieval interpretations of it, listen to “When is a Tree not a Tree?“]  It may, however, give us some insight into what was considered a “colour” in their academic and philosophical system.