Heapstown cairn is not impressive; well, not at first view.  Not far away, high on the slopes of the Bricklieve hills, set against the skyline are the bald, one-eyed heads, like ancient Formoire giants.  There are so many cairns, each evoking mystery and speculation. Then there is Heapstown, the greatest of all cairns outside the Boyne valley.

Unexpectedly, it is set on low-lying ground and, these days, looks more like a pile of left-over building rubble outside the garden of a nearby bungalow.

It is bigger than it first looks 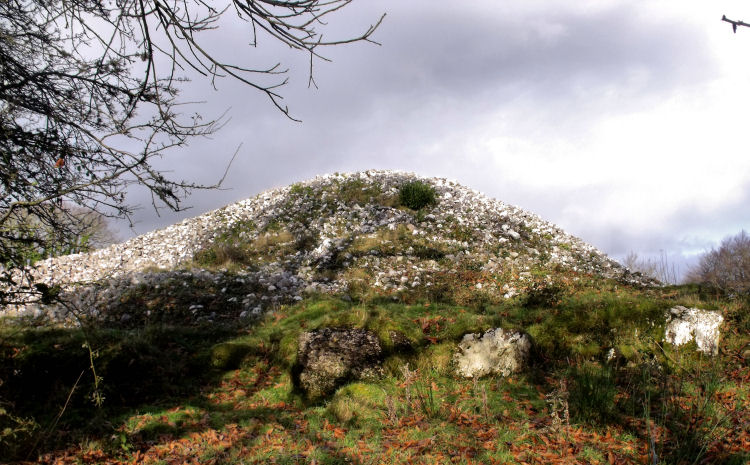 close up, being almost 60m in diameter and 10m high; and, walking around it, many of the kerbstones are still visible. It has never been excavated, but is probably a passage tomb dating from around 3000 BCE.  It used to be much larger, but much of the stone was robbed for roads and walls in the last centuries. There is also a drawing from 1837 by George Petrie that shows a giant pillar stone on the top. There is no sign of this today, although a pupil from Ballyrush National School mentions it, being present but fallen, in the “School’s Folklore Commission Survey of 1937”. No-one is certain what happened to it.

But Heapstown still has an aura of mystery about it, standing, as it does, at one end of the plain of Moytura. For in story, this was the well of Sláine. Here, Dían Cécht with Octriul, Míach, and his sister Airmed, dipped the fallen Dé Danann warriors into the well, so that each was brought out alive and whole. Here was the well of restoration until the Fomóire, Octriallach, lead his men, each to cast a stone into the well, so that it was buried forever

If you have already listened to the podcast connected to this article, you will have found, as we did that there is more to this story of death and rebirth. Maybe there is more than grass and thistles growing amongst those ancient stones.