A Battle between Equals 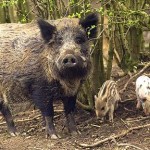 In a recent episode, 6.01 – The Quarrel of The Two Swineherds, we discussed a magical battle between two equal antagonists. These were Friuch and Rucht, the swineherds attached to the chieftains of Munster and Connacht respectively. As we made clear in the podcast, this pair were in no manner low status menials. As with the cup bearers or door keepers, these were men of high importance. It is clear from their stated abilities that these swineherds are indeed chief poets, upholding the wealth and fertility of the land.

The story tells how they are persuaded, perhaps goaded, into a contest by their own Túaths, who each wish to show off the powers of their own man. The contest begins in a friendly manner with both Friuch and Rucht initiating the other’s pigs’ failure to thrive. But, inevitably, this contest of equals gets out of hand and causes chaos. Both swineherds shape-shift into a series of different creatures – including two great birds, water creatures, stags and Fian Warriors – each for a period of two years,  a sure indication of their marvelous poetic abilities. Finally, in the form of worms, they are swallowed by two cows who will become the dams of two wondrous bulls,  the Finnbend Aí and the Dond Cualngi. If you would like to enjoy the full story of this shape-shifting contest, do listen to the podcast.

This tale serves the purpose of an ‘origin story’ for the Táin Bó Cúailnge, the great battle for dominance between Connaught and Ulster that carries in its path so many other  exploits and hero tales.  However, we also commented on the significance of the parity demonstrated by these two antagonists and its relevance to the stories within the Tain tradition.

Magical battles, especially those involving changes of shape, are not uncommon. We have referenced several of them in other episodes. However, there are differences. This tale does not involve shape-shifting to expiate an escape, as in Cian’s transformation of himself into a pig to avoid the attention of bandits. (See Series 2 episode 9: The Children of Tuirenn). The same is true of Gwion’s multi-formed flight in the Mabinogion story.  Gwion has unintentionally gained the magical benefit from a cauldron of wisdom lengthily prepared by Ceridwen. He shape-shifts desperately in an attempt to evade capture but is eventually swallowed by her in the form of a grain of wheat while she takes the form of a hen. In all his forms, he is trying to out-wit Ceridwen rather than to challenge her.

Neither is it the shape-shifting challenge to a master by an apprentice or junior poet / warrior.  This is definitely a battle between equals, and such parity is more unusual.

In series 2 episode 4 “On the Track of the Dagda” we  discussed the meeting between The  Dagda and Indech’s daughter. This is a battle of words of power. No shape-shifting takes place, but the threat is implicit.

Then the girl said ‘You shall not go to the battle by any means.’
‘Certainly I will go’ replied Dagda.
‘You will not, for I will be a stone at the mouth of every ford you cross.’
‘That may be true,’ he replied ‘but you will not keep me from battle, I will tread heavily on every stone and the imprint of my heel will be on every stone forever.’
‘But you still will not go past me until I summon the Fomorians who are the sons  from the fairy hills, because I will be a giant oak in every ford and in every pass that you must cross’ she countered.
‘Indeed I will go past and I will hack at every oak with my axe and the mark will remain in every oak tree forever.

During the podcast we referred to the folk song ‘The Two Magicians’. The song, perhaps best known in the modern version popularised by Steeleye Span, takes the form of a chase between a Smith and a virginal woman who seeks to evade his advances. The woman shape shifts to aid her escape, just as Gwion does  in the story of his escape from Ceridwen in the Mabinogion,The smith adopts an appropriately predatory form, as does Ceridwen. In some versions of the song the woman escapes the smith. In other versions the Smith catches up with her and takes her maidenhood.

However, although this British song shares some superficial similarities with the stories already mentioned, especially the tale of Gwion and his multi form pursuit, it has less in common with the tale of our two swineherds. 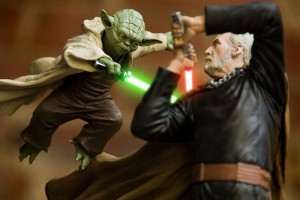 Whereas many of the central encounters are between a master and an up-coming apprentice or junior,  several magical encounters between holders of equal powers can be identified. The force battle between Yoda and Count Dooku comes to mind, or perhaps the meeting between Mace Windu and Darth Sidious is a better example.

Another of my favourite films also fits the pattern. This is the 1963 Roger Corman film, ‘The Raven’, very loosely based on Poe’s poem. It involves a magical battle between magicians to rescue a third sorcerer who has been transformed into a raven. Starring Vincent Price, Peter Lorre and Boris Karloff, this tongue-in-cheek film is a classic.

A more traditional example can be found in the Finnish Kalevala. The Kalevala is a synthetic compilation of folklore and tales collected and formatted into an epic narrative by the nineteenth century linguist Elias Lönnrot. Lönnrot made a great many field trips to gather as much material as he could from the ancient oral tradition of surviving songs and poems, and formed them into a continuous narrative. There are also more modern translations and retellings of this traditional material.

One of the central characters of this Finnish tradition is Väinämöinen, a wise poet and creator magician. At the start of the first cycle which bears his name, he meets and battles with another, lesser magician, the jealous Joukahainen. The battle takes the form of a contest of songs of power, which, as we have demonstrated in the podcast, is frequently the poetic equivalent of shape-shifting. Joukahainen boasts of his abilities, but Väinämöinen easily defeats him with his own more powerful magical words. Below is an extract from this section of the story retold by Aaron Shepherd from ‘The Songs of Power, A Finnish Tale of Magic’ from the Kalevala’. You can read the whole story through the following link: http://www.aaronshep.com/stories/026.html

Said Joukahainen,
“Yes, I know a thing or two.
I know the fire is on the hearth, and the smoke hole near the ceiling.
A plough in the south is pulled by horse, and in the north by reindeer.
The pike feeds on salmon and lays its eggs when frost arrives.”

“Iron comes from ore, copper from the rock.
Water is born from the mountains, fire from the heavens.
The titmouse was the first of birds, the willow the first of trees.”

“A toddler has such wisdom!
Can you furnish nothing better?”
Said Joukahainen,
“Back in the beginning, the seas were dug out, and the mountains piled high.
The pillars of the sky were erected, and the rainbow raised.
The sun and moon were set on their paths, and the stars scattered in the sky.”

“Know yourself a fool,” said Vainamoinen.
“For I dug out the seas, and I piled high the mountains.
I stood among the seven heroes who erected the pillars of the sky and raised the rainbow.
And when that was done, we set the sun and moon on their paths and scattered the stars in the heavens.”

This part of the tale, ‘The Songs of Power’, shares resonance with our Irish tale of the Poet-Swineherds and their magical contest. However, Vainamoinen and Joukahainen are by no means equals. Joukahainen is a typical jealous upstart, a young, would-be magician-poet attempting to challenge the older and more experienced master poet.

The latter part of this and later song cycles may have a greater connection with  the story of the ‘Quarrel of the Two Swineherds’, and provide an unexpected connection to ‘The Two Magicians’, the folk song referenced earlier in this article. After the battle of the songs of power, the defeated Joukahainen offers his sister’s hand as a pledge for his life. Although the sister, Aino, dies, Vainamoinin continues his quest for a bride. In a later part of the first cycle, (songs 6-10), Vainamoinen seeks to woo ‘The Maiden of the North’. He persuades the magical smith, Ilmarinen, to aid him. Even with this aid, Vainamoinin undertakes many dangerous adventures in his attempts to win the maiden.

In subsequent song poems, the smith becomes a rival for the maiden himself. He is also set a series of impossible takes to carry out but succeeds with the help of the putative bride. Eventually, it is the smith, rather than Vainamoinin, that she chooses to marry.

So, it seems, this is another epic story-cycle that commences with a tale of two magical equals,  who begin as friends and become rivals. Our Poet-Swineherds do not become rivals for the hand of a maiden, but in their incarnations as the two great bulls they certainly initiate, like Vainamoinin and Ilmarinen, a plethora of epic stories. In this short article I can offer no more than a brief outline of the themes that make up these Finnish song cycles. The stories are entertaining and well worth reading in full.

I am drawing no conclusions from my observations of the story of Vainamoinin and Ilmarenin. I am suggesting no direct connection between the tales. However, I set out to identify another traditional tale of a magical battle between equals. Resonances with the Finnish Kalevala have proved unexpected and worth exploring further.

I can leave Star Wars for another time!