The Treasure Bag of the Fianna 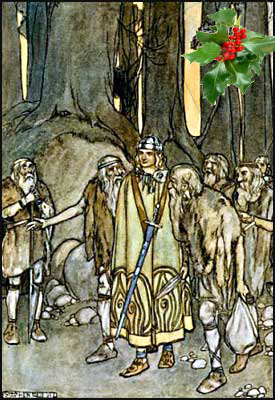 The fair boy stared at the bag, turning it over in his hands. It felt smooth to the touch; fine leather, warm and welcoming to his fingers. He continued to stare at the pouch, its faded colours telling a story, but it was a tale he could not yet read. But he knew the object, even though he had never seen it before.  Here he was, finally, holding in his hands the ancient treasure bag, stolen from his father, Cumall, in his final hours, as he was killed by his enemies, in battle, leaving his son a fugitive; leaving him a fugitive even before he was born. And so, he had been brought up in secret, and now travelled from court to court, from adventure to adventure, always in hiding, always alone. There had been so many times he had been forced to fly, only one step ahead of his enemies, and so many adventures. Now, the latest of these exploits had brought him the treasure bag.

He had fallen into this adventure by accident. He had reddened the earth with the blood of a man threatening a woman he had met by chance. And the deed had brought him more than her thanks. For, though he had not known it before, the man he had slain was the Grey One of Luachar, the enemy who had dealt the first blow to his lost father; the man who had taken the bag as a bounty. But that was long ago. Most of the men of his father’s war band were dead; or very old. There were a few that hunted with old Crimnall. He, Fionn thought, would want to see the precious bag again.

Fionn sat down to take another look at the treasure. It had seemed satisfyingly bulky and heavy when he had first taken it from the corpse of his enemy, but now it felt oddly lighter, almost empty. Fionn grunted and attempted to open the bag. But the feathered drawstring was stiff, would not even loosen. The fair warrior felt irritated. He was tempted to take his knife to the recalcitrant leather, but then the old man, Crimnall, came to mind. For him, the bag would be a precious relic of the old days. Besides, he might know how to open it.

Old Crimnell laughed a toothless grin of pleasure when the worn bag was placed in his gnarled hands.

“Now this,” he laughed, “I thought I would never see again. Did you know, Lad, that this bag once belonged to the great Lugh himself?  Manannán gave it to him when he set out to help the heroes against the Fomoire Balor, he of the poison eye.  Oh yes, he gave his foster-son treasure upon treasure to arm and adorn him. There was the Freagarthach, Manannán’s own  sword; a radiant, jewelled helmet; armour of such magnificence and…”

“The treasure bag,” broke in Fionn, hoping to keep the old man’s attention on the leather container balanced on his meagre lap.

The elderly warrior was not to be so easily turned from his mind’s-eye reminiscences.

“Yes, the treasure bag,” he continued. “That was no small gift. Had you heard, it was made by Manannán himself from the skin of a crane? No?  Aoife, the daughter of Delbáeth, it was who fell in love with Ilbreac. Luchra, her rival for the man, would have none of it and, turning Aoife into a great crane bird,  forbade her land for 200 years. When she finally  died, Manannán made this fine bag from her skin and filled it with his most magical treasures.”

Crimnall was silent for a moment as he searched his memory. Fionn waited impatiently.

“It was said to contain,” Crimnall spoke slowly, “Manannán’s shield, his knife, the king of Scotland’s shears, the king of Lochlain’s helmet and the bones of Asal’s swine, along with Goibnu the smith’s girdle.”

“And are they still inside the bag?”

“We will have to find out,” answered Crimnall, picking it up.

“Ah, well,” replied the old warrior, smiling at the lad. “It depends when you open it. You cannot expect a bag with such a lineage to be simple. This is the bag of Manannán, and it responds to the tides and times of the ever-changing waters. Look for it to open when the sea is full, in high tide; for, at the ebb tide, it will always be empty.”

“And is the tide full now?” wondered Fionn hopefully.

The old warrior nodded. Carefully, he lifted the bag and stretched open its wide mouth. Then, slowly he tipped, scattering its contents onto the green of the grass.

Golden treasures lay there gleaming in the watery sunlight; grew greater as they fell away from the constraint of the magical bag.

The gifts of Manannán.

The wonderful treasure bag of the Fianna.