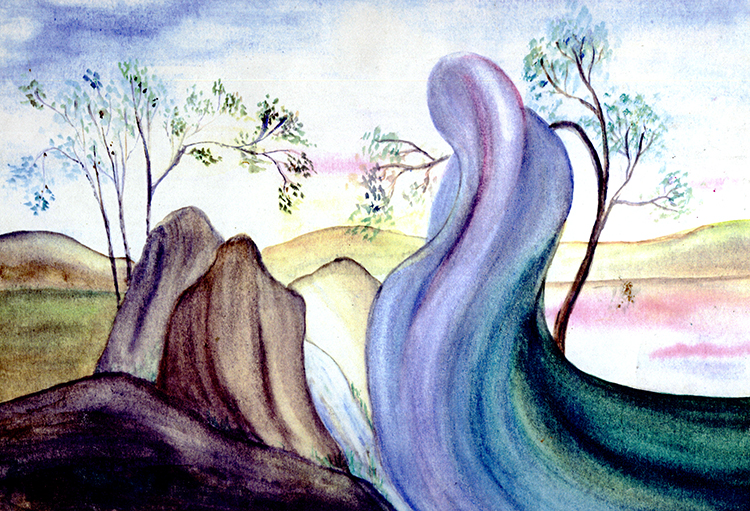 from a painting by Chris Thompson

In the days of dreaming, when the Ever-Living Ones still walked freely among the misty mountains and green valleys of Ireland, when the soft light of enchantment still shone from every hill of the síd, there was a well.

It was a deep, hidden pool, fringed and caressed by nine strong hazel trees. Pale leaves in spring would gently stroke the bubbling waters; and as the year turned, red nuts would drop softly into the deep, reflecting mirror of the well.

Within its depth, the wise ones, the old ones, the salmon, consumed each kernel of wisdom, each nut of inspiration, for had they not the whole world in a nutshell?

It was a deep place of wonder, of enchantment, of understanding; but above all, a secret place.

A deep and secret place, but not unknown. It was known, after all, to the wise men, the magicians, who would drink the water from the sacred pool, skimming the surface of its secrets, wielding its knowledge and absorbing its enchantments.

And so they became great, awesome, knowledgeable, powerful, enchanted, inspired – but not inspiring.

Then came Sinann to that place. Granddaughter to the sea, she came in her tide-time. She came free and fresh, drawn like a seagull from the open sea to that deep wide well; deeper, wider, and stronger than the sea itself.

Her feet were like white seashells and her hair was woven with the wind.

Her azure-green robe undulated like wind-washed waves as she walked.

The salmon stirred in their bonds of knowledge and began to turn in great spirals rising to meet their freedom.

As she reached the well, the water rose to greet her. Wild waves of beauty reached out for her, overstepping the bounds of knowledge. New patterns of laughter, white and blue, green and purple, azure and turquoise, the deep longings of amethysts, cried out to her as the waters danced around her.

She danced the wild dance of inspiration, unfettered by knowledge, the joyful steps of understanding freed from its clever bonds. The song of the waters of intuition swept her along and she allowed herself to become one with it in its frenzy and ecstasy.

The magicians watched in horror as their secrets were poured forth in a babble of wise words, the gems of their secret wisdom shining like pearls on the bed of the crystal river. For the well, no longer contained and static, had indeed become a river, tumbling over rocks, dancing in sheer exuberance for its own pleasure, until it reached the plains.

She flowed gladly and graciously down, down through the land, becoming broad and queenly, a goddess among rivers; bestowing favours, carrying the salmon of knowledge on her way once more to reach the sparkling sea.