The Story of Airmed from Cath Maige Tuired 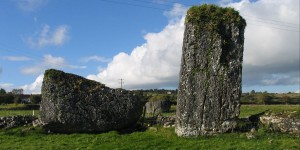 from Cath Maige Tuired, The Battle of Moytura

translation and notes by Isolde Carmody

Meanwhile, Núada was debilitated.  A silver hand / arm was set on him by Dían Cécht, with the power of every [other] hand / arm in it.

However, his own son did not like that i.e. Míach.

He made for the hand and he said;  “Joint against joint of it and fibre against fibre.” He had healed it within three “niners”.

The first “niner” he turns it around against himself and it is cleansed.

The next “niner” he turns it around on his breast.

The third “niner” he would remove the bright flowers from black reeds that had been blackened from fire.

He threw a sword at the crown of his son’s head so that the flesh was cut from its position on his head.

The young man healed it through the device[s] of his art.

He repeated the strike so that his flesh was split as far as the bone.

The young man healed it by the same device.

He struck the third blow until it reached the membrane of his brain.

The young man again healed this by the same device.

Then he struck the fourth blow and obstructed the brain, so that Miach died.  Dían Cécht said that no physician could cure himself from that death-blow.

35. After that, Miach was buried by Dían Cécht, and three hundred and sixty-five herbs grew through the grave, as many as his joints and fibres.

It is then that Airmed spread her cloak and dug up those herbs fittingly.

Dían Cécht came back to her and mixed the herbs, so that no one knows their correct cures unless the Holy Spirit taught them after that.

And Dían Cécht said, “Though Miach is not [alive], Airmed will persist.”

This appears as a noun referring to some unit or technique of measurement.  The type of measurement seems to refer specifically to grain.  Glossators take the “-med” part of the word to mean measure, and this stands up to linguistic analysis.  However, I feel it also relates to the verb “ad-rími”; counts, records, ennumerates, computes.  While the verbal noun of this verb is “áram”, counting, it does have a verb of necessity form “áirmide”, countable, which seems tantalisingly close to “airmed”.  There may not be a direct etymological connection between “airmed” and “ad-rími”, but there is surely a poetic one.

“Airmed” has a specific relationship to measures of grain.  In O’Davoran’s Glossary, he explores the connection thus:

…an “airmed” in weight i.e. the amount of weight of corn or malt i.e. a sieve

Even more intriguingly, “airmed” is often found in the same contexts as “míach” (see below for an exploration of “míach”):

O’Davoran’s connection between “airmed” and “críathar”, sieve, is suggestive of an “airmed” being some standardised container or vessel used in storing or measuring dried grains.  This is in contrast to “míach”, which seems a more abstract amount, and many examples of its usage are in combination with words such as “lestar”, cup, and “bolg”, bag.  Further, the specific use of “críathar”, sieve – a tool used to winnow or separate dried grains, points to the connection with “ad-rími”, counting, recording.

This fits with the role of Airmed in our story.  She separates out and records the growth from Míach’s grave into her mantle, acting as a “cráthar” for winnowing and recording the crops of Míach.

The most straight-forward literal rendering of this name I can offer is The Eager Plough.  It may seem strange that the lauded physician of the Túatha Dé Danann should be named for an agricultural implement.

To be more precise, “cécht” is part of a plough, probably the plough-beam; the central “stem” to which the plough-share, coulter and handles are attached.  But it seems likely that, as in much poetic language, the part can stand for the whole.  Dían Cécht is not the only member of the Túatha Dé to have “cécht” as part of his name: one of the sons of the Dagda is called “Mac Cécht”, son of the plough [beam].

As for “dían”, it is a popular and wide-ranging adjective.  It can mean swift, rapid, sudden, eager, impetuous, forceful, vehement, swift-passing, fleeting, active, strong… and is even found in the names of some poetic metres.  Although this story may point to the senses impetuous and forceful, we have chosen eager as a less negative and more general description befitting a plough at work.

Dían Cécht is not only the head of this mythical family of physicians; he stands as the exemplar or founder of the entire profession of medicine.  There are four related law-texts, of which one is Bretha Déin Cécht, “The Judgements of Dían Cécht”, – the other three similarly citing Goibniu the smith, Luchta the carpenter and Creidne Cérd the brazier – which set out laws and regulations relating to their respective professions.  Why, then, is the founder of medicine called a “plough-beam”, however “eager” it might be?

Perhaps the answer lies in understanding the basis of “medicine”; that is, health.  It is worth noting that, in Old Irish language and texts, there is no distinction between a plant, a vegetable, and what we might term a medicinal herb.  There was even an Old Irish maxim that all one needed to stay healthy was celery and leeks in one’s garden. [Cf. Early Irish Farming by Fergus Kelly].  So good food-crops and good health were intrinsically entwined in the mindset of Early Irish Society.  It is not, then, so surprising that the mythological character who is most adept at healing human wounds is also most adept at preparing and maintaining the health of the soil.

In most translations of “ault fri halt di & féith fri féth”, “féith” is translated as sinew.  I chose to translate it as fibre, since it is unclear to me whether there was a specific anatomical sense of the word (e.g. sinew, tenon, muscle etc.), or if it was a more generalised meaning.

As noted when discussing “Airmed” above, “míach” has a specific relevance to grains and their harvesting and measuring.  It is often translated bushel, in an attempt to render the sense of an agreed amount or unit of value.  Indeed, several law texts indicate that a “míach” of malt (mrach) was worth one “screpall”, scruple.  There were 24 “screpuil” in one “ungae”, ounce [of silver], and some uses of “míach” use it in terms of value: e.g. “ag lōige mēich”, a cow of the value of a ‘miach’.

As we noted above, “míach” also has a special relevance to measures of grain, but even more to malt; the source of beer and whiskey.  There is even reference to a “fleith in méich”, Feast of the “Míach”, in Munster – an Irish feast would not be a feast without whiskey or beer!

Since “míach” can be used as a unit of measurement or value, it seems more abstract than “airmed”.  One comes across phrases such as “lán armide méich”, which we might interpret as the fill of a bushel-sack or something similar.  The “míach” seems to be the amount, and the “airmed” the vessel with the capacity.

This term arose in the tale “Noinden Ulad”, The Debility of the Ulstermen, in relation to the length of time for which the curse of Macha would last.  In that tale, it was “co nnómad n-ó”, until nine generations.  In the current story, “nómaide” still relates to a period of time, but we have no means of exactly determining what that time was.  It could have been nine days, nine hours, or some other formulation relating to nine: since we cannot be certain, I have left it as “niner”.

We  learned much more of Núada in Series 2, when we  examined  Cath Maige Tuired, The Battle of Moytura, in greater depth.  For now, I will tantalise you by saying that the name of the king of the Túatha Dé Danann, who lost his hand in the battle with the Fir Bolg when he first came to Ireland, seems to relate to an Indo-European root meaning acquisition.  Subscribe to the podcast so you won’t miss out on the discussion!