The Romano-British temple to Nodens at Lydney Park

I have never visited Lydney Park in Gloucestershire so I cannot give a personal impression of the complex. However, the site is very relevant to any exploration of Nuada.

There are definite etymological connections between the British Nodens, the Welsh Lludd (Nudd) and the Irish Nuada.

Descriptions of the temple complex given below are largely taken from the Lydney Park entry on Wikipedia and the excellent site on the complex at www.romanbritain.org. 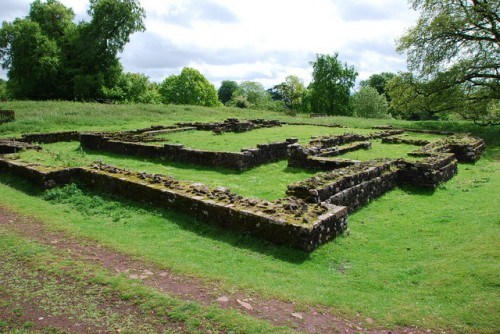 “The temple complexis situated on a steep bluff overlooking the Severn Estuary from the north-west,

The  site was excavated by R.E.M. Wheeler in the 1920’s, who established that the shrine was constructed sometime after AD364,  although the site was occupied c.250 by the huts of the workers from the nearby iron-mines.

The temple itself is rectangular in outline measuring 80 x 60 feet with additional heavy, angular buttresses containing a number of niches on their interior sides – presumably for statues – and an entrance via a short flight of steps on the south-east. The cella measures 32½ x 55 feet overall with its extreme north-west end divided into three separate 7 ft. deep rooms, probably indicating a tripartite god, with each room dedicated to a different aspect of the triad.

The temple of Nodens emulates the format of a normal Romano-Celtic shrine, although in a somewhat monumental style, using a rectangular plan instead of the usual square and providing for three separate shrines instead of the normal single cella. The temple was probably provided with a clerestory in the upper part of the cella and thus resembled its typical Romano-Celtic counterpart.

“The small finds are numerous indeed. Over 8,000 coins … prove a very rich occupation extending certainly into the fifth century.

Nine representations of dogs in stone or bronze, a bronze plaque of a woman, a bronze arm, an oculist’s stamp, 320-odd pins and nearly 300 bracelets quite definitely indicate a healing cult.

There is some indication, from the inscriptions and philology, of a hunting aspect.

Sea-monsters and fish on the cella mosaic, and bronze reliefs depicting a sea deity, fishermen and tritons suggest some connexion of Nodens with the sea. A bronze object (headdress or vessel?) also shows a sea-god driving a chariot between torch-bearing putti and tritons.

Thus a picture emerges of a complex deity, combining the diverse aspects of healing, hunting and the sea. …” (Lewis, p.89)