The Island of the Salmon 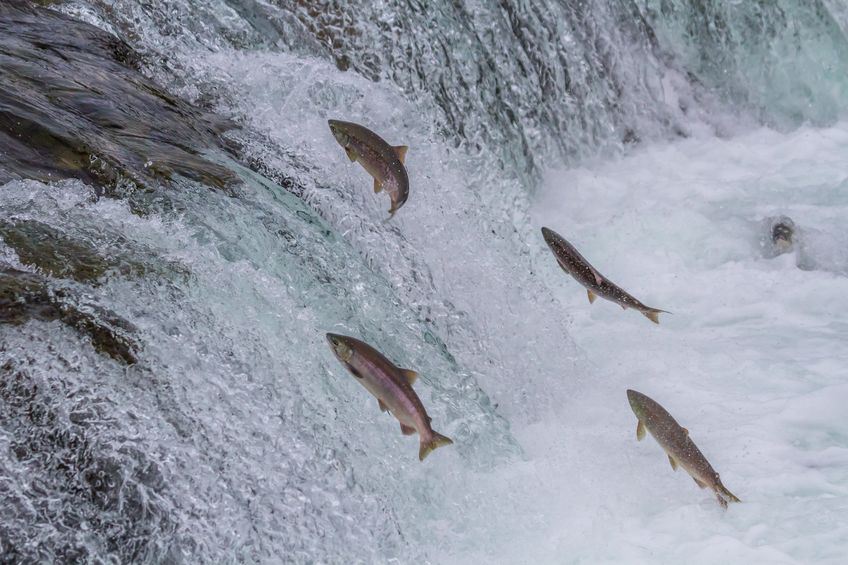 To travel in the hands of God.
To put away the boat’s oars and let the undulating waves breathe them where they would.
To watch the world’s sun light up the broad plain of the sea into molten gold, glittering with sudden sparks of silver like drowned stars.
There was a great peace in this voyage. The monk had found a calmness of spirit, even when the wind rose and stung the waves to roughness.
He rested, rocked in simple contemplation.

Snedgus’s stomach rumbled loudly and Mac Ríagla looked up, torn from his spiritual musings.
Snedgus shrugged apologetically.
“I can’t help it,” he mumbled. “I’m hungry.”
“The Lord God will provide,” answered Mac Ríagla piously, glancing heavenward. He noticed, in passing, that clouds were covering the late afternoon sun, and that the golden light was changing to grey. A fresh breeze ruffled his robe. Repressing a shiver, he continued his argument.
“Were we not led to find a well of pure water, so wondrous that it seemed to taste of new milk?”
“But milk is not a meal, and that was yesterday.”
“Then pray that the Lord provides you with something more.” Mac Ríagla’s tone was stern as he returned to his meditations.

The light faded, and the sea grew dim. At twilight it was hard to keep fancies at bay. The dying light patterned the ever-moving sea surface with dappled shadows. Could he be sure that Manannán’s marvelous land did not lie hidden in its depths? Did golden apples still dance on silver boughs to the motion of forgotten currents?

He dragged his eyes heavenward again, to where a gibbous moon, pale and watery, was attempting to tear herself loose from ragged clouds. It would rain this night.

Mac Ríagla went to join his companion under the hide covers that made up all the shelter this small vessel had to offer. Two stomachs rumbled, loud and long, from out of the darkness.

The wonder was there for them with the rising of the sun. It was an island, tree-bearded and edged in golden sand. A fast-flowing river rushed joyfully down a forested hill, disgorging its noisy waters into the sea-foam. The boat bobbed and bounced as the two monks guided in the small boat, beaching it comfortably.

On this bright morning, Snedgus and Mac Ríagla gratefully made their morning devotions on dry land. Then they set out to explore this God-gift wonder. There was clean, fresh water to be had. They would not go thirsty. There was dead wood, dry and fire-ready. It would be an easy task to make a blaze to warm their salted bones and to dry their damp clothes. It would be good to cook a hot meal, if there was just… something to cook. Surely, God would reward their devotions with… something.

The two men, warmed but hungry, made their way inland, following the tumbling river uphill to where the land was open and unwooded. The terrain grew more rocky as they climbed, but the river remained rapid.

They were coming to the highest point of the island, almost at its centre. The land rose suddenly steeper, climbing in a grey-green escarpment that almost seemed to border the hill. The sun was higher now, and it was becoming hard to see, to pick out details as they peered up to the top of this sharp slope, sunwards.

Something was glinting silver in the sunshine. The water tumbled down the rock-face – not in one sudden waterfall, but in a series of terraced slopes; a weir. There were clear signs that it had been man-shaped, altered to contain and regulate the flow of the water. Yes, the glinting that had caught their eyes was a fence built to cross the escarpment, almost dividing the island into two halves. But this was a fence of silver – all of silver. Who could have built such a marvel?

Then they perceived the true wonder of the island; for, glinting silver in the morning sun, came salmon dancing up the river in rippling strength, leaping against the current. The two monks watched in amazement as fish after fish began a miraculous journey up the tumbling weir, fighting wave after wave of water in the desire to return to the source. As for the size of these magnificent fish, the hungry monks were certain that each must be as big as a bull-calf.

They watched, admiring the determination and power of the creatures as they leaped to their destiny. As a symbol for faith, it was humbling. The two monks looked at each other. They briefly raised their hands to heaven in grateful thanks. Then,.as one, they stepped into the foaming waters.