The Island of Sheep 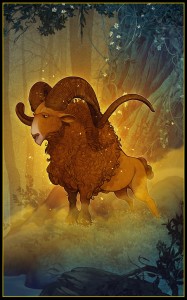 They had been two weeks away from land now, fourteen days and fourteen nights on the undulating, heaving, breathing waves.

They were here together, in a vessel that had appeared so strong and stalwart on the good earth. It now seemed no more than a fragile cockle shell adrift on the lucid illimitable sea.

Tadhg smiled wryly to himself. The boat had proved sufficient, so far. It had carried him and his forty brave warriors, along with his sea-reaver prisoner guide, safely, so far.

He had wondered how great this vast wind rippled watery plain really was. How far was it to this enemy land of Fresen that had, so completely, stolen away his wife and his brothers. The Almarach had been vague on this part of the rescue plan.

But, this realm of Manannan was, by no means, an empty land.  They had marvelled as shoals of iridescent salmon danced, dizzily in the sun spattered waters. The cattle and kine of the Water Lord had been varied indeed. Great grey Bull seals dove beneath their boat like javelin shadows and there were others, huge sea beasts, fountain flowing streams into the misty air. It was a diverse and beautiful world, but Tadhg realised that he was longing for the green of grass and earth beneath his feet.

Then, as if his thought had taken shape and substance, there it was. It was a fair green isle, flat and wide, and solid.

And now he stood on the welcome island while his warriors hunted for fresh food, glad to be active. Idly, he kicked at a smooth, grey pebble, lying, immobile, at his feet. It skittered along the surface of the velvet grass.

“It didn’t sink”, he thought with a mental grin.

There was a shout, followed by replying calls from within the trees.

“The hunt is up”, he thought to himself and turned to reach for his great throwing spear. His stomach rumbled. A joint of roasted meat would make a pleasant change

Yes,  they were, emerging from the wooded cover, a group of his best fighters, but there was no sign of any prey? Surelyhis fighters were not running away.

And then, the great beast broke cover. It was a ram. But what a creature! It was the size of a stallion, if not larger, and its magnificent fleece curled and flowed around it. Its horns crowned its head like a coronet of curved knives.

The warriors fanned out warily, seeking to bar its path, and momentarily, the beast slowed, until it stood at bay before them, eyes blazing and nostrils flaring with rage. Tadhg raced to join his men.

“I am sorry sir, we couldn’t hold it”, yelled his lieutenant, “We tried to take down one of the ewes. The ram just went for us”.

The beast was reading itself to charge. It tossed its wild horns, and pawed the ground with huge hooves, sparking the stone.

Tadhg nodded and five javelins flew in unison. The beast did no more than toss his head and five broken shafts fell, shattered around it

Tadhg took a wary step, and then another. Slowly, stealthily he started to flank the huge animal. The ram ignored him, staring with baleful eyes, at the warrior line and the second wave of javelins ranged against it, waiting to fly.

And then, just as the beast began to charge, Tadhg let loose his javelin. It was a lucky cast, as he admitted later, but he watched , in astonishment, as the beast faltered and then sunk to its knees. Then he continued to watch in joyful relief as the ram’s head fell and the creature shuddered and died.

His men, already cheering, were  on the fallen beast, ready to strip it of its skin.

Tadhg took a deep breath and then called his warriors to order.

“Take care in the butchering, lads, he called. That fleece will see us snug on sea drenched nights.

As he walked back to the boat, he was smiling to himself. So, they would not go hungry. If they could take the ram, even one of such gigantic size, then they would feast on a fat wether or two while they were here leaving plenty to prepare for their journey.

They would not starve on the open sea. Where there was one island, there would be others. They would reach their goal and he would save Liban and his brothers from their imprisonment.

He thoughtfully regarded the boat, beached now, until the tide should return it to its element. Yes, they would reach their goal but what wonders might he encounter on the way?