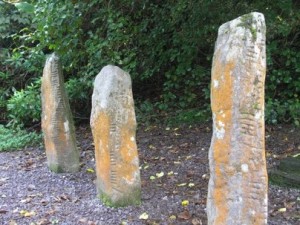 To make a fool of him, to humiliate him in public – it was an unforgivable insult to a man of his status.

But for a young man, hardly more than a child, to be the cause, the origin of his discomfiture; this was more than he could bear.

And the youth who had done this thing to him was Mongán, son to the king of Ulster.

There was a strangeness, a knowingness about the lad; a hidden wisdom, quiet and sharp as a sudden frost.

It was whispered on the wind that Mongán was not, indeed, the son of Fiachna, but fathered by Manannán himself. Oh, the child had been born to the queen, without doubt – but if the child were the get of the Sea Lord himself, then how could even the chief poet of Ireland stand against him?

His face darkened again as the images of his humiliation rose, unbidden, before his eyes. The young clerics, arguing the lore of the stone markers. It had been a scene of such normalcy, of rightness: King Fiachna on his progress around the provinces of Ireland, accompanied by his chief poet. All had been as it should be.

A simple request for information, a question of lore, directed to him. That was correct. That was right. That was how it should be.  And he had answered their respectful queries; not, perhaps, a full and thoughtful answer, but a lore-master’s answer nonetheless.

“I do not remember all that. I should think the Children of Deda raised them, to build the City of Cú Roí.”

Then the youths, these striplings, had dared to correct him to his face.

“These are the three stones of a champion-band, a warrior-band,” they had told him. Conall Cernach aided Illand, his foster-son, to raise the stones.  It was, after all, the custom of the Ulstermen to celebrate the first arming of a warrior with such stone markers. “But surely you should know that, for this is an Ulster story and you are an Ulsterman.”

And each youth had showed to him a face of jeering pity. Yet the eyes that looked out of each face were the eyes of the boy, Mongán; and Eochu knew with a certainty that he was behind the insult.

Twice more he had met with such insults. Twice more, groups of grinning youths had flung his ignorance in his face.

“We want to hear from Eochu what rath this is, and who lived in it.”

“So many build raths,” he had replied, “that they do not all find room in the memory.”

A good enough answer for the young and untrained.

They had laughed in his face; and yet, all the time, it was Mongán’s eyes he could see, jeering at him in insulting pity.

Then Fiachna, his king, had turned to him in condescending gentleness.

“You shall not be thought the less, just because of your lack of knowledge,” he had told him, smiling, a royal hand patting his shoulder. Yet it was Mongán’s voice he had heard, Mongán’s eyes laughing behind the assumed sympathy.

And he knew, with a certainty, that Mongán would not let him be; that the inspiration of Manannán was with the youth, and not with him, poet of all Ireland.

Eochu drew himself up to his full height, gazing out to sea, breathing the wind. He was still a poet, he could still see. He stared into the darkness, the sea wind cooling his face, and draining away the shame. The inner vision came to him, the insight of what was to be. Let Mongán be what he was, the child of prophecy, and the progeny of Manannán.

But that was all he would be. The boy’s closeness to the Otherworld would be his undoing. He would never truly be of this world. His glory would be fleeting. He would bear no sons to carry his name, his blood, down through the circling years.

He would return to Manannán, forgotten.

If this was a curse, so be it. It was his curse; the curse of Eochu, chief poet of all Ireland.