The Dindshenchas of the Barrow River – Berba 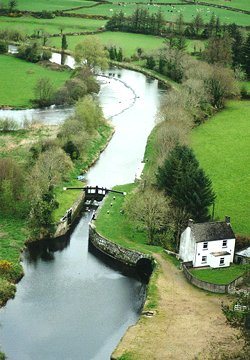 The Barrow, lasting its silence,

which reaches across the host of old Ailbe

it is a duty of knowledge to find [out] the reason

[its name is] “Boiling”, the flower of every renowned word.

It is not agitation [i.e. it was stillness] that was caused in it [by]

the ashes of Mechi Great Destructions:

It silenced and it cooked [the river] beyond redress,

the bitter filth of the old serpent.

stalking the plunderer to consume him:

From its behaviour, it would have gnawed all the troops

Of the peaceful host of old Ireland.

Because of that, Mac Cécht killed [it]

there were severe sanctions [arising] from the pure slaughter

for preventing it eternally from the destruction,

Beyond all sanctuary, from the total consumption

Its grave is known to me, the part where he threw [it]

a tomb without house and without covering

its bad ashes, with no harmless character,

It found peace in the noble Barrow.

Mag Ailbe, the Plain of Ailbe, was an area of Leinster, including the River Barrow (Berba), parts of the Wicklow Mountains, Slewmargy (Sliab Mairge) in Co. Laois, and parts of Counties Kildare and Carlow, east of the river Barrow.

In O’Davoran’s Glossary, the word is analysed in order to make sense of the calmness of the river:

The Barrow is largely slow and flat – with only one natural weir.  It is tidal as far in as St. Mullin’s in Co. Carlow.  This makes it a good salmon river. It also has a decent otter population.

For descriptions of the river as it is today, see the following websites:

This means a “flock” or “troop”, and can refer to both people and animals.

Literally, “Son of the Plough”, he is one of three brothers who are sons of Cermait and grandsons of the Dagda.  His brothers were Mac Gréine (“Son of the Sun”) and Mac Cuill (“Son of the Hazel”). Mac Cécht was said to be married to Fotla (“Divisions”), and his two brothers to her two sisters, Ériú (“Land”) and Banba (“Movement? Deeds?”).  All three women were supposed to give their names to Ireland in turn, although Fotla and Banba have only been used poetically to refer to the country.

The name, Mechi, is difficult to analyse.  The closest I have come is the term Methi, meaning “blight”, which seems apt given the description of the serpent in this poem.  His epithet, mór-millti, “Great Destructions”, also seems appropriate.  He is most definitely a serpent, the term used is nathair, cognate with the English word “(n)adder”.

This term is used to describe the effect on the river made by the ashes of the serpent, Mechi. It is clearly derived from the same root as the river’s name, Berba, and so means “boiled, melted, dissolved”.  The closest I have been able to come to understanding the use of this word in context is the denaturing of enzymes caused by cooking them. Perhaps it convys a sense of something being dead and inert after it has been boiled.