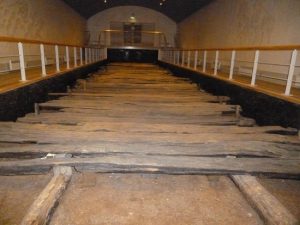 The Irish bog is a remarkable environment. Not only is there a wide diversity of flora and fauna to be found,  but these wetlands also provide a rich resource  for archaeological discoveries.

Things survive under the bog. Materials that would generally perish ,  wood, leather, and even the soft tissue of a human body, may survive  in the wet peaty soil. This is because the acidic conditions  create a low oxygen environment which will prevent decomposition for hundreds, even thousands, of years.

Wooden artifacts are particularly fascinating, because, by utilising radiocarbon dating and the precision of dendrochronology, these objects can be dated with some certainty. Bronze Age wooden paddles, a yoke, and even an Iron Age trumpet have all been found in Irish bogs. But perhaps the most fascinating, and certainly the most numerous, wooden artifacts are the toghers, pathways laid over the boggy terrain.  Around two hundred of these have been found across Ireland, dating from the early Bronze Age to late Medieval times.

Possibly the most interesting and mysterious examples date from the Iron Age, and the best known of these rare  sites is Corlea, located close to Keenagh in County Longford.

I first got to see the excavated trackway at Corlea years ago when I was writing a book with children from around Longford. Well, it is true that, in the collaborative novel, a gadget to help find part of an alien space-ship was lost in the bog.  However, it did get us all examining the exciting finds that had really come from the peat. 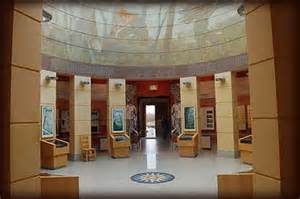 The Corlea Trackway Centre is an attractive building with highly informative displays about the wetlands, its flora and fauna, as well as detailed descriptions of the trackway and its story. There is a pleasant little cafe as well. A  visit to the, well presented, preserved portion of the trackway itself is, of course, the prime focus. Over the years, Isolde and I have given storytelling shows, talks and workshops there. Its location is a little off the beaten track, and sadly does not get the attention it deserves.

The excavated trackway is impressive. In 1984, workers from Bord Na Mόna uncovered some ancient wooden planks while processing peat for the nearby power-station. There was  great excitement when the timber was dated to 148 BCE, earlier than the toghers found at Annaholty, Co. Tipperary, dated to 40 BCE.

So from then until 1991, a team lead by Professor Barry Rafferty investigated the site, uncovering and conserving the archaeology. The main Corlea trackway was something very special. It was built on a foundation of birch rails set about 1.2 metres apart. The planks themselves were made from split oak, 3 to 3.5 metres long and around 15 centimetres thick. This main Corlea track was around one kilometre long. It lead towards a small area of higher ground, and a further kilometre of similar roadway lead away from that same high ground on the further side of the bog. Dendrochronology confirmed that wood from both roads came from oak that was cut down in late 148 BCE or early 147 BCE, so there is good reason to believe that the entire road system was completed in one year. 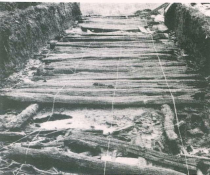 The trackway when uncovered

During the excavations, a total of 108 toghers were discovered, if 76 in the nearby Derryoghil bog are to be included. The vast majority are the more conventional toghers, constructed from woven hurdles laid over bundled brushwood. However, without doubt, Corlea is a unique site of national archaeological importance.

When I stand and look at the section of conserved roadway, in its climate-regulated hall, I cannot help thinking what a major piece of engineering the building of the road must have been without modern power tools and tractors. It would have required a great deal of co-operative labour to complete in the time.

The excavated trackway is flat and smooth, seemingly intended for wheeled transport, carts or maybe chariots. Professor Raftery estimated that around 300 large oak trees would have been required for the planking with a similar amount of birch for the rails. He reckoned that it would have taken around a thousand wagon loads. That is a great deal of work to undertake for any community, and suggests that it was regarded as a high-status project.

Yet, in spite of the huge effort in resources and labour, this trackway system would have lasted less than ten years before sinking back into the bog, and it seems possible that this short lifespan was intentional, or at least, unimportant to its builders.

Archaeology can tell us much about this trackway system. We  can learn when it was constructed, what materials were used and how they were put together. Archaeology can tell us that the main tracks do not connect to other sites but focus on an island of higher ground nearby. This does suggest that the roads were built for a particular ceremonial event of some importance that took place in or about 148 BCE.

Anything more must be speculation. So, can our text, Tocmarc Étaíne, provide us with any further clues? Clearly, we cannot regard the text as providing us with’ blueprint’ information. But, what the text does provide is a powerful and direct poetic reference to the creation of this same roadway. “The Wooing of Étaín” is a tale where a monumental task, so difficult that it requires magical skill to attempt, is undertaken as part of a treaty between two peoples who are deeply wary of each other, close to conflict, yet still just maintaining diplomatic solutions.

In fact, the description of the building of the road in this tale is startlingly reminiscent of how  archaeologists tell us the road was built.  But there is one more detail. The text tells us that a fault was built into the road because its builders were observed in the making. The track was not meant to survive.

If I were to speculate as a storyteller, rather than as an archaeologist, I would say that it is the atmosphere of the text that is significant. There is such a sense of heaviness and gloom about the final part of this story, especially in it early poetry. The tale  may beginwith a wooing, but it conclude with loss and a breakdown of relations between the men of Ireland and the folk of the Síd. Eochaid’s decisions lead to a breakdown of law and natural justice.

So to continue my speculation, could it have been that  the trackway at Corlea was created in a time of change and trouble. Could it be possible possible that the site was created to offer a purpose-built pace for the )negotiation of a   settlement. If so, I would hope that there was lasting peace. Unfortunately, neither site nor text tell a tale of “happily ever after” for the people of the mortal world.

Let us hope that Bé Find and Midir fared better.

For information on Corlea trackway Centre go to: http://www.longfordtourism.ie/see-do/attractions/corlea-trackway-visitor-centre/

Bord Na Mόna offer  highly informative pages on peatlands archaeology.  On the site  they explain what make the wetlands so successful in preserving fragile materials. They also provide a full  index of items that have been found in Irish bogland. Go to; http://heartland.ie/articles/archaeological-finds-peatlands-ireland#

Professor Barry Raftery’ s book “Pagan Celtic Ireland:  The Enigma of theIrish Iron Age”  can be hard to find. I got my  reasonably priced copy through Ex Libris books. (Postage is free to the UK, but, unfortunately, expensive outside Europe.) http://www.alibris.com/Pagan-Celtic-Ireland-The-Enigma-of-the-Irish-Iron-Age-Dr-Barry-Raftery/book/4952558