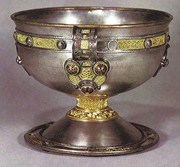 From inside the dún, It sounded like an army approaching in full battle-stance. The whole household of Crúachán stopped still, startled in their strength.

“Go see who is coming,” said Medb to her daughter.

So Findabair went to the high place of the house and looked out. The sight before her dazzled her vision.

Two matched dappled greys, high stepping, high mettled, manes and tails waving like flying flags, advanced the yoke-silver wicker chariot. The horses were beautiful , but better yet, the rider: Under a feather-plumed awning stood a tall man, upright and crimson-cloaked, glittering with gold. His curling hair, brown at the scalp but sunset blending, from blood-red to a diadem of yellow gold at the tips, covered his strong shoulders. In one hand he held a bronze-banded shield and in the other, a flame-bright javelin, five-barbed.

“Tell me what you see, girl”, snapped Medb, and Findabair described the fast-approaching visitor.

“He is the long knife of proud victories; the all-noble, red-handed Loegaire,“ answered Medb grimly, “and he will not be alone. Look again.”

“There is another, following, no worse than the first,” reported Findabair.

“A swift red vigorous roan and a broad bay horse are matched in strength and marvelous agility.  Flawlessly, they lead a bronze-wheeled chariot, avoiding every obstacle, stump and stone . And the man who rides it, under his bright-plumed awning, is ruddy-fair and wavy haired. He has a mantle of blue and silver over a jerkin of clean white. He, also, has a fine shield, brown with yellow bosses and a fiery spear.”

Medb grimaced. “That is Conall the Victorious.  He will slaughter us with flails of iron, should he meet us in rage.”

“I see yet a third chariot coming over the plain,” said Findabair, and her voice grew honey-coated as she stared into the distance.

“Now here are horses that have no peer. They bound in beauty, spirited and powerful. One is a grey, hooves thundering, casting up great earth clods as he passes, so that flocks of birds fly in his wake. His breath is so steam-hot that it seems he breathes flame. And the other, darker in colour, is no less. This great beast is broad of back and sure of foot, lusty, spirited and fiery. He must be a champion of many a proud race. And the chariot is equally fine, wicker and wood, with  a bright pole of silver, bronze-mounted.

Yet the man within seems melancholy, almost sad; but he is oh, so handsome, Mother. He wears a tunic of soft crimson laid open at the neck and fastened with a salmon broach of inlaid gold, just covering  his strongly heaving chest. He has a white hooded robe, embroidered in red gold, draped loosely over his strong shoulders: His eyes, they flash proudly like dragon-stones: his teeth, Mother, you would think a shower of pearls had dropped into  his mouth; and those dark black eyebrows framing the ruddy pink of his cheeks…

He is well armed of course, Mother.

His huge crimson shield, chased with figures of animals in gold, is fastened over those magnificent shoulders, and tied to the chariot frame is a blood-red mettlesome spear. But that is not all. Flat on broad muscled thighs lies his great, golden-hilted sword long and straight…”

Medb looked sharply at her daughter.

“That is enough,” she ordered. “Truly, I recognise the man from your description;

a fragment of flame and fire:

This is Cú Chulainn, hero of Ulster.

He will grind us to mould and gravel, unless his pride and his fury be subdued.

“Come, Findabair, stop gawping and call for the women of the house. There is much to prepare for our guests.”

Loosely based on the  translation by George Henderson