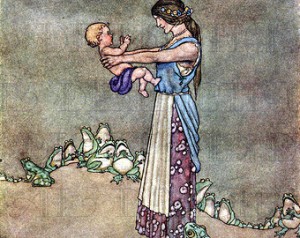 Once upon a time, in the dear and beautiful land of Connacht, there lived a wealthy man and his wife, who wished for nothing other than a healthy child to make their lives complete.

It sounds like the beginning of a familiar fairy tale, and so it is. In a way, the birth of a child often seems like a fairy tale; at least for a while.

But this couple is different. They don’t just sit and wait, sit and wish. The would-be mother doesn’t sigh passively at a window, musing on a child with hair as black as a raven’s wing and skin as white as the snow. She doesn’t just discover a baby no bigger than her husband’s thumb, or make an unwitting accidental contract with an unexpected goblin or disgruntled witch.

They both wish for a son – preferably a hero-child – who will grow, as is usual, at twice the rate of his peers. They wish their son to be a wise warrior, a champion of his people. Who wouldn’t wish for such a son as this? Sadly, you can’t always choose what your children will be. You must wait and see how they will turn out.

But this couple are not content to wish and wait, to see what might happen. This determined couple have a plan.

They decide that it is the devil who is most likely to give them what they want, and they know just how to set about getting him to oblige them. They follow the old custom and shame the devil into giving them their hearts’ desire. They begin to fast against him.

Now, this is an old custom, and largely forgotten, even in fairy tales. If you had a grievance against someone of high status – a king maybe, or his chief poet, someone you couldn’t hope to take to law – there was one way you might get your problem addressed. If you gave notice and publicly fasted at their door, your opponent could not eat, drink or sleep, could not even say their prayers, while you remained fasting, not without becoming honour-lost; a serious matter indeed.

It was an effective way of getting a point across in most cases, and perfectly legal and above board. How it would work against the devil, I cannot imagine, and our story does not tell. Preventing the devil from saying a Paternoster hardly seems effective; but, however they managed to swing it, their plan worked.

Before long, and after the usual time, the Brugud and his delighted wife found themselves cradling not one, but three sturdy male babies.

And in the best possible fairy tale tradition, the three boys grew into tall, strong, brave, generous young men, possessed of every skill and accomplishment. No-one had a bad word to say about them. These paragons were everything their proud parents had hoped and planned for.

And the happy ending?

Not yet. Not for a while yet.

Not for a long while and a long journey.

For no-one had thought to inform these young heroes of the unusual circumstances of their birth.

There was no fairy godmother on hand to rescue these boys.

This devil’s gift was to have a twist in the tale.