The Birth of Lugh ~ a story 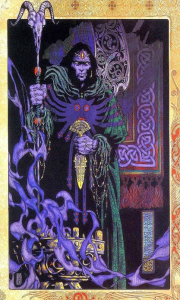 The air was rippled with watery sunshine.
But through one small round window shone a bright brave sunbeam, clear and golden, cutting its way into the dim glow of the room.
And in its cutting sat Ethlinn.

She sat still, facing the window, facing the clear light, the fresh air; and a tear flowed down one cheek.
For this chamber, built of glowing stone, furnished with fine woods and intricate embroideries, was the eye of a needle of stone.

It was a wonderful tower; it was a magic tower, but it had no door. And she was its prisoner, suspended in time.
Outside, somewhere on the bleak and desolate island, her father, Balor, raged. For there had been a warning, a foretelling: If Ethlinn had a child – a son – then he would destroy his grandfather.
And so Balor, the malevolent, one-eyed giant of the Fomoire, had raised from the bedrock the tower of glassy stone.

And there he had placed Ethlinn to grow, hidden from the world.
But prophecies have a way of coming true.

Balor felt safe, felt able to live his life of war and robbery; but in his greed, he began the weaving of the web of his own death. And so the spell that was to sing Lugh into being began to wind.

There was a cow. It was no ordinary cow, the Glas Gabann. She was dappled as white foam on dark water, and as fertile as the sea. She was coveted by many, but owned by Cian of the Túatha Dé Danann. And Balor was jealous.

Through the trick of his shape-shifting, Balor came to the place where the forge of Goibniu was heavy with iron, and Cian absorbed in the growing of a sword. Balor came in trickery and, grasping the halter of the cow, led her away through the green waves to his hidden isle.

But Cian would not be thwarted. In his anger, he called upon Biróg, druid of the mountains. Laughing, she carried him over the waters, shrouded him in fronds of shadowed cloud, veiled in sun-haze.
There he found Ethlinn. She received him with joy, recognising in him the seed of her freedom.
And the shadowed walls of the tower were warmed and transformed, and, for a brief while, the poison eye of Balor closed in sleep.

In her time, Ethlinn gave birth to the child, Lugh.

Then Balor woke, feeling the surge of green growth, feeling the sun warming the land into solidity, to wholeness. In his anger, he cast the child into the unformed, ever-changing sea.
But Lugh, born of air and fire, now took to his own the element of water. He danced with the salmon on the sea’s crest. He turned the waves’ curves with the eel.

And Biróg of the mountains caught him up, scattering silver water drops,
carrying him to his destiny; the Ildánach.