Rhiannon, meet Dubh Lacha – You have a lot in common! 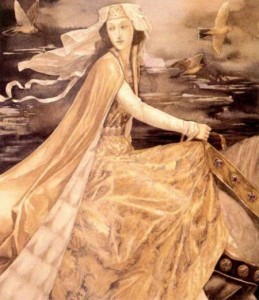 The Prequel to the wedding of Pwyll and Rhiannon; from Mabinogi Pwyll

While the Irish and Welsh stories are of a different order – the Welsh commencing with a hunt and the Irish with a battle – there are motifs and themes relevant to both:

Pwyll encounters Rhiannon, first seeing her from the Mound of Arberth. However, he cannot catch up with her until he asks her to stop her horse.

He realises that; ‘at that moment the faces of every woman and girl he had ever seen were dull in comparison to her face’.

She has come to find him as she has been promised to a man she dislikes and would rather have Pwyll. It is agreed that he will come to claim her at the court of Hyfaidd Hen in one year’s time. She will have everything arranged.

However, Pwyll is so excited and happy at his wedding feast that, to Rhiannon’s horror, he blithely offers a young and princely man whatever gift he desires. This man is Rhiannon’s discarded suitor, Gwawl, and he requests the wedding feast, which includes the bride!

Rhiannon is left to sort out his mess. She puts Gwawl off for a year, when, she promises, another wedding feast will be held. She gives Pwyll clear instructions as to what to do.

Pwyll comes to the feast disguised as a beggar, and asks for enough food to fill his bag. However, the bag is not full, however much food is put inside. Eventually, Gwawl climbs inside to stamp it down. The bag is sealed and the poor suitor is beaten, mistaken for a ‘badger in a bag’.

Rhiannon, meet Dubh Lacha. You have a lot in common!

Rhiannon and Dubh Lacha are quick-thinking and capable women.

Both women have to clear up after the impetuosity and lack of foresight shown by their respective partners.

They both have a lot to put up with.  For a start, both are given away at their own wedding feasts. At least for Dubh Lacha, given away by Brandubh, this is exactly what she has been waiting for.

Rhiannon, on the other hand, has not been exchanged for a herd of cattle, even if they are the most beautiful (Otherworld) cattle in Ireland.

Both women plan calmly and quickly, when put in impossible positions, i.e. exchanged, or given away. They both demand the grace of a year from the usurping partner. Both use this time to get their true partner galvanised into action. 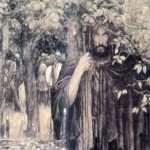 Pwyll merely requires to be told what to do. He carries out Rhiannon’s plan effectively, disguised as a beggar.  Her plan to trick Gwawl into the sack, where he can be dealt with, is carried out efficiently by her would-be husband.

Mongán is not so biddable.  At one point, Dubh Lacha even has to strip off to goad him into action. However, to give him his due, he takes clear and definitive action once he has encountered the ‘hag of the mill’, Cuimne.

Both women and their partners complete their story with the utter humiliation of the offending ’other’. Gwawl, Rhiannon’s ex-suitor, finds himself publicly beaten and forced to give away sureties of non-reprisal before being released. Brandubh is publically stripped of his wealth and ends up sleeping with an ancient hag.

The main difference between the two partnerships is that Rhiannon and Pwyll solve their problems alone, even if Rhiannon seems the more dominant of the two; whereas there is a duplication of characters surrounding Dubh Lacha and Mongán.

Dubh Lacha and Mongán are born on the same night, and promised to each other from birth. They share the same birth date are another couple, Mac an Daimh and his eventual wife.

Mac an Daimh is an engaging character, and there is no equivalence for his role in Rhiannon’s tale.  He is more than the Shakespearean, outspoken servant. He is active confidante and companion to Mongán, just as his wife is companion and confidante to Dubh Lacha.  It is Mac an Daimh’s down-to-earth wisdom and humour that adds greatly to the quality the tale.

There are also a plethora of hags, particularly the hag Cuimne (“Memory”), who plays a central role as the substitute bride.

The two stories are of a different style, and their hero’s origin of a different nature. Yet, if it were possible to introduce our two female protagonists to each other, they would, indeed, find stories to share.

Read the Mabinogi of Pwyll on Mabinogi.info.