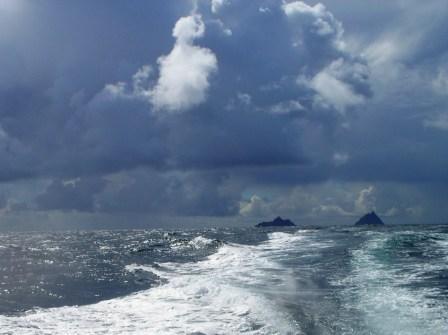 In our first episode on the  Imramma, ‘The Voyage of Bran Mac Febul,  we discussed the monastic preference for settling in lonely and out of the way places. We referred to the practice as ‘extreme monasticism’. One of the best examples of this must be early monastic complex on a lonely rock, you can hardly call it an island, known as Skellig Michael. off the coast of Kerry.

Even today, voyaging in a modern motor boat, it is still something of an adventure to visit this World Heritage site. Even in summer, there is no guarantee of landing on the island.  A visit certainly aids appreciation of  the determination of these hardy voyagers,

I have visited the Skelligs twice  Both voyages were in the month of September, nine years apart.  I have reprinted below, a couple of extracts from my own notes. The journeys were something of an Imram for me, although I am glad to say, the skipper of the boat was not ‘rowing around’ but seemed to know exactly where he was going! 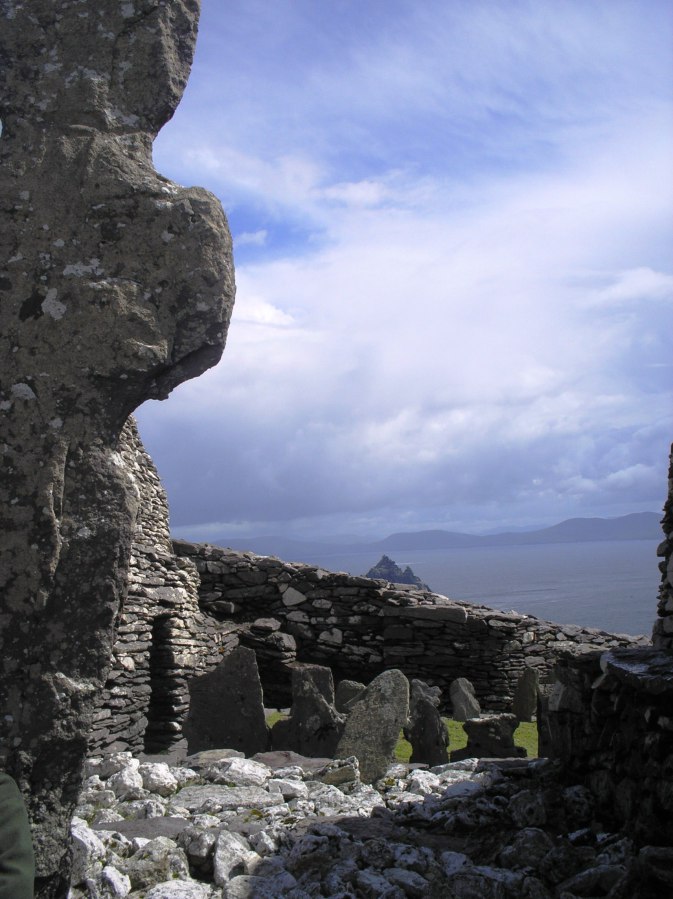 We slide down Coomanaspic and into the harbour at Port Magee. We find our boat quickly, a small motor boat, licensed for twelve passengers. While we are waiting for our skipper, we get chatting to a Scottish woman, Sarah.  Her brother works in a local hotel. He has been here for three years and has never once been able to land on the Skelligs. He has advised her that we are unlikely to land today. This is the first time the boats have been out in ten days and the season’s storms have been aggressive. We will be travelling in hope.

It feels exhilarating to be underway, cutting our path through the green glass of the waves, but I am aware that we have not yet left the shelter of Valentia. When we do, we are rocked and plummeted into fairground laughter as the sea heaves and breathes beneath us.

The mainland is far behind now, but I still cannot see the Skelligs. Then, as we turn into the waves, I understand that we have been heading straight for them and that the view has been blocked by the boat.

Skellig Beag is impressive. Sheer rocks pile up into a crazy, pinacled Gothic edifice, stark against the blue grey sky. The bare rock is white with nesting gulls and iced with crashing foam.

Beyond it lies Skellig Michael itself, black spikes piercing the moss-turfed and impossible slopes. We can already identify the distant, stone hummocks that make up the monastic eerie of those long departed dwellers on the edge of the world. You have to wonder what those hawkish Viking invaders imagined that they would find in this indomitable fortress of spirit.

But it seems that we are less hardy than those Valhalla bound Sea-farers. There are hurried conversations on mobile phones, discussions and shaking heads. Even before our guide leaves the cabin, thumbs down, we know we questing pilgrims are to be repelled.  We cannot land.

The sea is rising again, the wind stronger. The   boat flies, seal swift, waves parting as we plough a path. The sea concedes our return, but the wild salt spray constrains our vision to a narrow channel and the islands on the edge of the world are lost to us, this time. 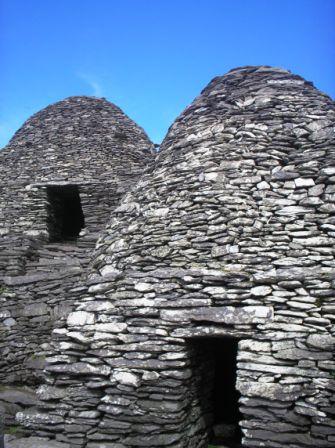 The extravagant cone of Skellig Michael bobs and bounces in the white waved water, like a grey inflated iceberg. It looks somehow, unstable as we hang over the boat’s rails taking angular photos. It is disconcerting. We are the ones who are rising and falling on our fragile floating platform, but as the boat stills its engines, it is hard to appreciate this.

We have passed by the great rock’s sharp bird clad sister and are waiting to see if it will be safe to land on Skellig Michael itself. Raising our eyes, we can see uneven stone steps, carved out by the monks all those centuries ago. There is also the one , unexpected, and recent  addition to the rock; a circular helicopter pad.

Our gaze is drawn back to the landing site. The rungs look impossibly small, a slender ladder rising to a paved path. Our sightings of it are in constant motion as the sea rearranges our point of view.

But we are landing. Slowly, carefully, our skipper, eases us in and the boat is tied securely. One by one we gingerly climb the ladder onto the solid, monastic rock.

We are all still wearing motorcycle wet weather ‘onesies’.   We have been grateful for their cover on the way over.

“Keep them on”, calls out the skipper, grinning. But I am familiar with these uncomfortable garments, on my daily bike journeys. I strip  off the damp cover’all and send it back down to the boat. The skipper shrugs and waves.

It is finally time to ascend the steps we viewed from the bobbing boat. There are more than two hundred of them, cut into the landscaped slope, leading up to the monks’ ancient settlement of beehive stone huts. The sun comes out as we climb, and it becomes warm as we move into the shelter of the rocky peaks. Imagine the monks having to pass this way every day. Imagine this path in the depths of winter!

I am shivering in my fleece, in spite of the sun,  as I contemplate this thought, but at that

moment, the path opens out. We stand in the centre of the settlement The beehive huts cluster austere, domed, like monumental mole hills in a grassy clearing. A giant cross of ragged stone dominates, a rugged grey ghost of monastic memory. It is startling, the tones of the rock seeming to glow against the suddenly blue sky.

There are more visitors in this constrained space but I am able to enter one of the beehive structures alone. There are no windows, of course and the low door allows in little light. Yet, the interior space feels open, limitless, dim and calm. The corbelling is so fine and precise, that each stone, surely, would fit alongside no other.

Later, I relax in the sunshine looking out towards the narrow terraces thatwere once gardens of precious vegetables. I listen in to a guide who offers information on these hardy aesthetics who had traveled as far as they could go, out into the sunset, out into the Western ocean.

My mobile rings. I answer it almost absentmindedly.

“Where am I? Why, I am standing on the edge of the world.” 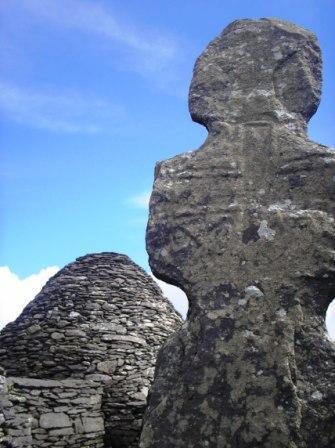 For further informatio go to:

A monastery may have been founded as early as the sixth century, reputedly by Saint Fionán, but the first definite reference to monks on the Skelligs dates to the eighth century when the death of ‘Suibhni of Scelig’ is recorded. Skellig is referred to in the annals of the ninth and tenth centuries and its dedication to Saint Michael the Archangel appears to have happened some time before 1044 when the death of ‘Aedh of Scelic-Mhichíl’ is recorded. It is probable that this dedication to Saint Michael was celebrated by the building of Saint Michael’s church in the monastery.

Some time between the sixth and eight centuries, a monastery was constructed on the broad northeastern summit of the island. During the lifetime of the monastery a hermitage, one of the most daring architectural expressions of early Irish monasticism, was also created on the narrow ledges just below the summit of the South Peak (218 m, above sea level), the highest point on the island.