Emain Macha, known as Navan Fort, is one of the main settings for the great heroic tragedies of the Táin Bó Cullainge, as well as many other stories of great feats and tragic losses. Here we find Conchobar mac Nessa, the legendary king of Ulster, the poison-tongued Bricriu, Cathbad the druid who foretells the fate of Deirdre of the Sorrows, and, (although he was not one of the Ulstermen), here are recounted the tales of Cú Chulainn.

And here we find the stories of Macha herself. 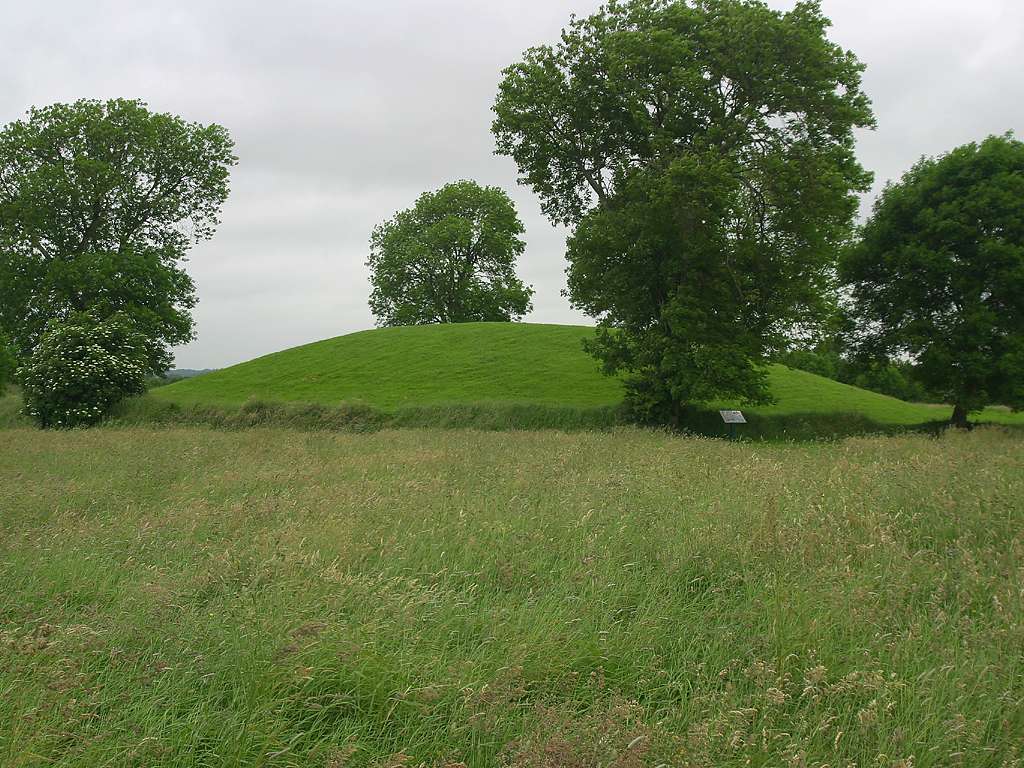 If you visit the site today, you will find an oddly-shaped green hill and an excellent interpretive centre which tells the archaeological and mythological story of Navan Fort. Before the centre opened in 1993, there was a small green hut at the foot of the hill. There you might get to talk with the guardian of the place, an engaging story-teller. If you were fortunate, you might hear about the last appearance of the great bull. You might find out how he leapt from hilltop to hilltop until he was brought down by Patrick on the hill of Armagh (Ard Mhachae). You might even be taken to see the stone marked by the hoof of the bull as he made his final leap from the Hill of Macha. Of course, the interpretive centre with its audio-visual interactive displays and excellent bookshop is highly informative and not to be missed but I kind of miss the story-teller. I would highly recommend a website that was not available when we exploredthe Macha story for the first time, more than three years ago.  This site is Eamhain Mhacha Heritage apps – Bringing the heritage of Navan Fort to life. One purpose of the site is to offer a guided tour on your phone or tablet that you can use while visiting but there is much more on this website to explore. The site covers the history and archaeology of the area in some detail, illustrating its importance over a long period of time. It is a very useful and informative resource. Navan Fort is a very important place. It is of exceptional archaeological significance as well. Not only part of a major Bronze Age complex, it is also one of only a handful of Iron Age sites so far discovered on the island of Ireland. It is surprising how little survives from this period. Another important iron-age site in Ireland is the Corlea Trackway in the County of Longford. This place deserves to be better known. Corlea Trackway: http://www.ancientireland.org/corlea/index.htm

Emain Macha was already becoming a busy place by the late Bronze Age. There was a complex of round houses and enclosures at Navan Fort; the Kings Stables site and the votive pool at Loughnashade, where the wonderful bronze trumpets were found, as well as another hilltop fort known today as Haughey’s Fort.  Among artefacts recovered is the skull of a barbary ape, so it must have been a fairly cosmopolitan place. By the first century BCE, it had become, at the least, a major regional centre. However, most fascinating are the archaeological discoveries made during excavations by Dudley Waterman and Professor Jim Mallory in the 1960’s and 1970’s, and by Dr Chris Lynn from the 90’s onward.

The story of the archaeology is complex, but briefly is as follows. Around 100 BCE, the earlier structures seem to have been replaced with a huge circular structure, most probably like a huge roundhouse, about 40 metres in diameter. This was built up from 275 posts, with a central post of oak.  It required a ramp at least six metres long to raise this huge post. It seems that the massive structure was never inhabited. Instead, soon after it was built, it was filled with earth and boulders, and burnt before being buried. Dendrochronology dates the burning to 95 BCE. It is a mysterious story, and suggests that Emain Macha was not just a defensive holding, but held deep and symbolic meaning to its creators. For more detailed information on the archaeological excavations at Navan Fort, follow the two links below: Report on excavations at Navan Fort from Queen’s University, Belfast: http://www.qub.ac.uk/schools/CentreforArchaeologicalFieldworkCAF/PDFFileStore/ Filetoupload,180972,en.pdf And for an informative article on Navan Fort excavation, read this article by Helen Steele: www.guernicus.com/academics/pdf/navan.pdf

The mysteries of Iron Age sites

It is interesting that the trackway structure at Corlea, mentioned above, also holds a similar mystery. This trackway, of which around 1km has been found, was made of split oak planks. It has been dated to 147 or 148 BCE, and was constructed over the course of one year. It was extremely well made and would have taken long and careful work to build. However,  it was only ever intended for temporary use. It would have remained useable for no more than ten years. This site is also connected with one of the great stories, Tochmarc Étaíne (The Wooing of Étaín), where King Eochaid Airem sets Midir tasks such as planting a forest and building a road across a bog, where none had ever been before, at a place called Móin Lámraige. The original text implies that Midir built it with a “flaw”. [For more on this story, listen to “Dindshenchas 11: Tocmarc Étaíne 3 – A Game of Fidchell“.] There are still many questions to answer at both sites.