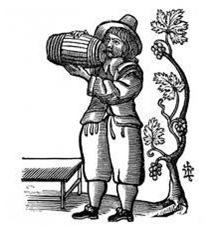 John Barleycorn is the titular character of a popular English and Scottish  folk-song,  found in a number of versions  going back, at least, to the sixteenth century. John Barleycorn is given as  the personification of  ‘the nut brown ale’ (or the uisce beatha) and all the process the grain goes through in order to provide the welcome drink.  The song also celebrates the many  occupations and trades-people who work towards the creation of the intoxicating  liquid. Yet the processes that create the  end product are described as a  deliberate murder and torture of this personified character,  He is buried, chopped down, beaten, bound and ground up. In fact the song generally begins with an oath being taken to kill him and his death is celebrated with each stanza.

The true antiquity of the song cannot be proved and yet it seems to be more than an amusing  metaphor for acknowledging the origin of  ale or whiskey.  It is hard not to find connections between John Barleycorn and the ancient culture heroes of the bronze age  who are cur down only to rise up again reborn with the annual new growth.   Many of the ‘so called’ mystery cults of the Middle East with their familiar heroes, Damuzi, Attis, Adonis, may share something  with our more homely, John Barleycorn. That they are connected with  herb (vegetable) and grain crops can be readily demonstrated.  Osiris,  one of the most popular of the culture heroes of ancient Egypt was said to have brought the arts of civilization to the Black Lands, including knowledge of cultivation.  Osiris was  threatened by his brother Set, Lord of the storm and desert places, and aided by his sister and wife, Isis, who  restored him to life after he was cut down by Set, by gathering up the pieces of his scattered body. 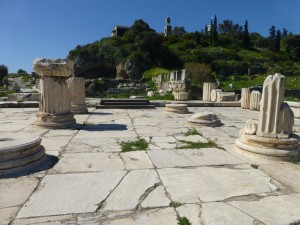 Eleusis is not on the tourist trail but is well worth visiting.
It is an easy local bus ride from Athens

The Greek  Eleusinian  mysteries were practiced from Mycenaean times into the beginning of the Christian era.  The annual procession along the Sacred way from the gates of the Kerameikos cemetery to the cult centre of Eleusis, some fifteen km away, was an important annual festival. This cult of Demeter and Persephone was particularly popular with women and its rites were kept strictly secret. The anonymous author of the 3rd century “Philophoumena” did offer a hint  concerning  the  rites.

“The most marvellous, complete and apoptic mystery, an ear of grain reaped in solemn silence”.

If you have listened to our podcast episode on Airmed, you will know that the Irish stories also contain a John Barleycorn figure. His name is Miach, and like Osiris, he is cut down by a close relative and his parts, in the form of fresh growing herbs,  are gathered together by his sister Airmed.  He is later found restoring fallen warriors at the well of Sláinte, along with his father and sister. His story is to be found in the wonderfully rich 9th century saga of Moytura. We are by no means, implying that there are any direct connections between ancient Egypt and early Irish stories but these two  examples  provide fascinating glimpses into a widespread mythic theme.

But back to our  folk song.)… There are a number of different versions. My personal favourite is the version recorded by the band, ‘Traffic’, but I also offer a version by Robert Burns

(as recorded by Traffic)

There were three men came out of the west, their fortunes for to try

And these three men made a solemn vow

Thrown clods upon his head

And these three men made a solemn vow

They’ve let him lie for a very long time, ’til the rains from heaven did fall

And little Sir John’s grown a long, long beard and so become a man

They’ve rolled him and tied him by the way, serving him most barbarously

And the loader he has served him worse than that

For he’s bound him to the cart

And there they made a solemn oath on poor John Barleycorn

And the miller he has served him worse than that

For he’s ground him between two stones

There was three kings into the east,

three kings both great and high,

and they hae sworn a solemn oath

They took a plough and plough’d him down,

put clods upon his head,

and they hae sworn a solemn oath

But the cheerful Spring came kindly on’

and show’rs began to fall.

John Barleycorn got up again,

and sore surprised them all.

The sultry suns of Summer came,

and he grew thick and strong;

that no one should him wrong.

when he grew wan and pale;

his bendin’ joints and drooping head

show’d he began to fail.

His colour sicken’d more and more,

and he faded into age;

and then his enemies began

to show their deadly rage.

They took a weapon, long and sharp,

and cut him by the knee;

they ty’d him fast upon a cart,

They laid him down upon his back,

and cudgell’d him full sore.

they hung him up before the storm,

They filled up a darksome pit

with water to the brim,

they heav’d in John Barleycorn.

There, let him sink or swim!

They laid him upon the floor,

to work him farther woe;

and still, as signs of life appear’d,

they toss’d him to and fro.

They wasted o’er a scorching flame

the marrow of his bones;

but a miller us’d him worst of all,

for he crush’d him between two stones.

And they hae taen his very hero blood

and drank it round and round;

and still the more and more they drank,

their joy did more abound.

John Barleycorn was a hero bold,

for if you do but taste his blood,

’twill heighten all his joy;

tho the tear were in her eye.

Then let us toast John Barleycorn,

each man a glass in hand;

and may his great posterity