‘If you can keep your head’ – Thoughts on the beheading game. 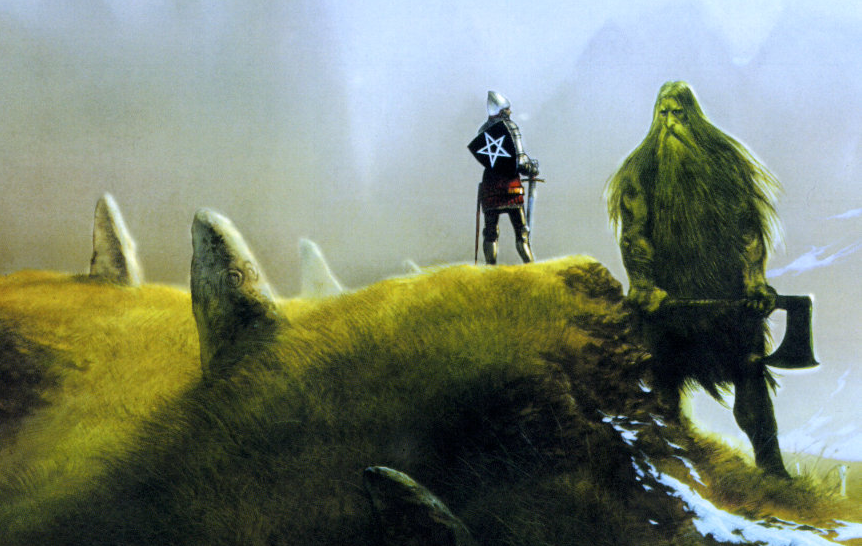 Gawain and the Green Knight by John Howe

I had never considered that I might commence a comparison of the beheading game in Fled Bricrenn and Gawain and the Green Knight with a quote from Rudyard Kipling. It is apt, particularly in terms of the  development  of Cú Chulainn’s character in this third stage of the saga. We discuss this in more detail in part 4 of Bricriu’s feast.

In this supporting article I wish to take a closer look at the curious shape-shifting giant who so effectively tests the prowess and determination of the heroes and to focus on the final test, the unusual beheading game.

In both podcast edisodes, Fled Bricrenn 3 and 4, we comment on the similarities between Curoi, as he appears in, the beheading game and the Dagda as he is described after his visit to the Fomoire camp before the battle of Moytura. See series 2, episode 4. Then there is the other exponent of the beheading game to include. This is the green knight from the late fourteenth century text Gawain and the Green Knight.

Curoi, arriving at the court of Emain Macha is described as an uncouth ‘Baclach’ (churl).

Next to his skin he wore an old hide with a dark dun mantle around him, and over him a great spreading club-tree (branch) the size of a winter-shed, under which thirty bullocks could find shelter. Ravenous yellow eyes he had, protruding from his head, each of the twain the size of an ox-vat, each finger as thick as another person’s wrist. In his right hand an axe weighing thrice fifty glowing molten masses of metal. Its handle would require a plough team (a yoke of six) to move it. Its sharpness such that it would lop off hairs, the wind blowing them against its edge.

The Dagda leaving the Fomoure camp is equally uncouth.

His appearance was unsightly: he had a cape to the hollow of his elbows, and a grey-brown tunic around him as far as the swelling of his rump. He trailed behind him a wheeled fork which was the work of eight men to move, and its track was enough for the boundary ditch of a province.

The Green Knight is a different matter. He is huge, handsome and noble, and dressed in rich embroidered green garments. He is mounted on a startling green horse and carries both a holly branch and a huge axe.

For he was clad all in green, with a straight coat, and a mantle above; all decked and lined with fur was the cloth and the hood that was thrown back from his locks and lay on his shoulders. Hose had he of the same green, and spurs of bright gold with silken fastenings richly worked; and all his vesture was verily green. Around his waist and his saddle were bands with fair stones set upon silken work.

The detailed description is too long to be quoted here but can be found, in full, through the link to the online text below.

Curoi and the Dagda  resemble each other in more than dress. Both are armed with magnificent axes as well as huge wooden clubs. The Dagda’s axe is referenced in his meeting with Indech’s daughter, shortly after he leaves the Fomoire camp.  Both serve as respected judges and testers. Both are speakers of ‘truth’. Both have an otherworld aspect. Both are magic users. In the ‘pre-Milesian’, portrayal of the Moytura cast, the Dagda is still a mover and shaker. He quite literally offers to lower the mountain to hide the land. Curoi, although presenting himself as an international traveler, rather than a dweller in the ‘hollow hills’,  still appears in a variety of other-world guises all through the tale.

Equally, the Green Knight’s prime purpose is to test the honour and determination of Arthur’s court in general and Gawain in particular. He, too, is a judge of great wisdom. Yet he too engages in verbal trickery and sleight of tongue. Even their names may be connected. Sir Berilak, the green knight is probably an attempt to  anglicise  the Irish word ‘baclach’, an epithet applied to Curoi. So, the green Knight is still an uncouth churl even if he no longer dresses as one.

As for  Curoi  and the Dadga, I think they would recognise each other if they met. Aimiable, uncouth, seemingly disinterested in hero deeds and appearance they may be, but do not be deceived. These characters are astute judges with a deep wisdom. They are powerful men of words rather than weapons, who shape the world wherever they walk. Both have cauldrons of abundance, and yes Curoi has one too. They still stride through story as they always did, most often in disguise.

The beheading motif, that links Curoi and Sir Bertilak, is a rare and extremely interesting one. I first encountered the motif in Gawain, read in a modern translation, as the West Midlands dialect used by its unknown author, often named as the ‘Pearl Poet’, is far more difficult to read than that of his contemporary, Chaucer. However, it seems likely, that the ‘Pearl Poet’ was familiar with the story of Bricriu’s feast, even if he had not read it, I am listening to the audio-book version of Tolkien’s translation, even as I write, and was struck, in passing, by the similarity of wording in the description of the Green Knight’s decapitation with that of Curoi at the hands of Fatneck. Gawain and the Green Knight is an elegant and courteous story but it does lack the wild and rumbustious humour of Bricriu’s feast.

Both versions, incidentally, may even owe a distant debt to Posidonious (circa 51BCE). He was a great polymath and traveler. Much of his work is lost but Athanaeus (3rd Century CE) quotes Posidonious’ observations of the continental Celtic practice in his ‘Deipmosophists’.

And other men having received some silver or gold money, and some even for a number of earthernware vessels full of wine, having taken pledges that the gifts promised shall really be given, and having distributed them among their nearest connections, have laid themselves down on doors, their faces upward, and allowed some bystander to cut their throats with a sword.

This seems a somewhat extreme drinking game, even by Irish standards. No opportunity for the ‘what was I drinking last night?’ moment. It is true that even Posisonius describes this as ‘a tale of long ago’, so it is possible that it may be an ancient memory of a version the beheading game story. Valerius Maximus  (14 AD to 37 AD).reported that the continental Celts held beliefs in the immortality of the soul strongly enough to allow IOU’s to be honoured posthumously. I cannot help feeling that aspects of Bricriu’s feast have made up part of the the storytellers’ ‘champion portion’ for a very long time.

It would be interesting to trace the path that linked the ninth century text of Bricriu and the late fourteenth text of Gawain. Professor Tolkien, in the introduction to his highly enjoyable alliterative translation, states that he sees little direct connection with Welsh or Irish story precedents. Loath as I am to disagree, I feel that Bricriu’s feast must be an influence, at least in terms of the intensive testing process which can only be satisfied by the final beheading game.

Gawain has a very different focus to Fled Bricrenn. It is well beyond the remit of this article to undertake any detailed comparison of the two tales, but as we were working on the text, a few points came to mind. I offer them here.

Both tales test the hero to the point of  destruction. Both have the beheading game at their centre and yet their emphases and ambiances are very different. I enjoy Bricriu. It is robust, exciting, and from the story tellers point of view, it contains scenes of high comedy. That Curoi is definitely hiding a broad grin behind his axe.

There is also an audiobook version read by Terry Jones: http://www.amazon.com/Sir-Gawain-Green-Knight-Pearl/dp/0007223617/