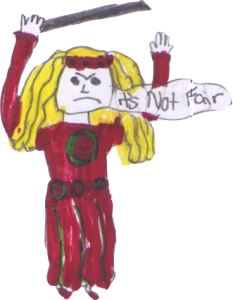 From a calendar created by Longford children

I met them with mild words and open smiles; my husband and this new young wife he had bought with so much gold and even greater labour. I flattered her with gentle compliments, calling her “king’s daughter”, worthy to sit beside me in our home at Brí Leith.

And she was beautiful – and young – it was true; although I cannot say she deserved the name of “the most beautiful woman in Ireland”. But equal to me, Fuamnach, most noble woman of my people, skilled in all the knowledge and magic of the Tuatha Dé Danann, the cunning pupil of the most learned of them, the wizard Bresal, my foster father? Equal to me? NO!

I could see that Óengus had warned my husband, Midir, to treat me with care; and that he did, calling me “wise”, “prudent”. And I might have accepted a second wife with pleasure as helpmeet and companion; but not this ignorant milksop, daughter of an insignificant Northern king! And besides, Midir was besotted with her.

And so I bided my time, dissembling acceptance, awaiting the moment when I could use my powers to be rid of the usurper and take my revenge by stripping my foolish husband of both his wives, the new and the old.

The time was not long in coming, for once Midir believed that I truly welcomed the girl, he left us alone together. I took the simpleton to the centre of the house and sat her down in a fine chair, pretending concern for her comfort.

Then I took the revenge that was my right. I struck her once with my wand of power, a rod of purple rowan, shape-changing her before my eyes; watching with satisfaction as she began to lose form and substance, melting away, until she was nothing more than a puddle, a small pool of water on the earthen floor. Soon even that should be no more and she would be lost to the limitless air.

As for me, I left Midir that day and returned to the home of my foster-father, Bresal.

But I am Fuamnach, and I have knowledge of things that my eyes do not see. What I knew was that I had left the house of Midir too soon. For the heat of the house dried up the pool rapidly and something of the girl was left behind. For the lessening of the moisture caused a worm to form, and the worm became a fly as purple as my rowan wand.

As day followed day, I heard much of this shape shifted fly. “It was,” they said, “very beautiful, and large, as great as a man’s head.”

“Sweeter music than the harmony of pipes, harps and horns,” it was reported, “the sound of her voice and the melody made by her wings.”

“Her eyes,” I was told, “would shine like gems in the dark, her fragrance would turn away hunger and thirst, and the drops shed from her wings would cure all sickness and disease.”

“Midir would fall asleep with her humming,” I heard tell, “and the fly would awaken him if anyone should approach him in enmity.”

But the worst news of all was that Midir was never without her company, and had publicly stated that, as long as this fly was with him, he needed no other wife.

I held this as an honour-shaming insult, and vowed that my revenge would be without parallel.

So now I draw to myself my power and make ready my spells. Cloaked in wisdom, I shall offer certain sureties of peace to enable me to get close to the precious fly again.

Then, and then, the fullness of my anger will finally be released.  I, Fuamnach, will let loose a storm of such violent passion that the shape-shifted woman will be buffeted away into the long lonely wastes of the world, forever.