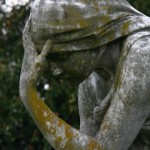 It was the first time keening had been heard in the green land of Ireland.  The poetry of mourning, the ritual of the eulogy.  Brig keened for her lost son, her impetuous red-headed boy, Rúadán.

Rúadán was dead, killed by the spear of Goibniu, and the smithcraft of the Dé Danann, killed as a spy in the forge..

It had been her choosing to give allegiance to Bres, a man of the Fomoire.  He was beautiful, yes, and wise in the ways of the land; but he was cruel and miserly. It had seemed fitting when Nuada, leader of her people, the Dé Danann, had been maimed, It had seemed fitting then to choose a chieftain from among the Fomoire, those strange sea people who shared their land,

It had seemed fitting then…

Bres, her husband, had put her people under a great burden of tax, keeping them in poverty. Why, he had even set her own father, the Dagda himself, to work building great ditches of earth.

And battle had not been averted

Now Lug, the Ildánach, master of many crafts, led her people, Lug, who, like Rúadán, was a son and grandson of both the Fomoire and the Dé Danann. Lug, with his Fomorean mother and Dé Danann father. Rúadán, with his Dé Danann mother and Fomoire father

So alike…. only Rúadán was dead.

And all had gone well – at least for the Dé Danann – and now the Fomoire were worried. They sent for Rúadán, one of the few who was welcome in both camps,

“Why is it,” they asked the boy, “that the weapons of the enemy are never blunted? Why is it that warriors we injure return to face us again each  day?”

And Rúadán, her son, his father’s son, had answered them.

“Not hard to tell: The warriors were renewed, dipped in the waters of the well of Sláine, Dían Cécht’s well of health.

“Not hard to tell: The weapons are re-sharpened each day in the skilful forge of Goibniu the smith.”

And Rúadán had been sent to the forge of Goibniu to kill the smith, to stop his skill… and she had let him go.

The red-haired youth had found his welcome in the fiery forge as always.

“Make me a spear,” he asked, the ruddy flames lighting his smile, and Gobniu set his hand to the hammer and the iron to the anvil. When the shape of the spear was sharp, Creidne Cerd framed it with rivets and Luchta set it to the shaft.

And Crón took it, finished it with her blood-red mark. She gave it to the red-haired youth.

And this was the moment that Rúadán made his choice. With a cry he lifted the spear and let it fly. It struck the smith, struck him there in his own forge. It wounded him but it did not fell him.

Goibnu plucked the spear from his own flesh and cast it once more. It struck Rúadán full in the breast, struck him and he fell, red in his own blood. There in the forge the youth died.

And Brig mourns for her son who will not be dipped in the waters of the healing well.

And the cadences of her keening are heard in both camps.