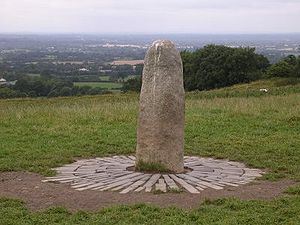 Lia Fáil – the stone of sovereignty at Tara

In the 21st century, we have quite different ideas of government, nationhood, sovereignty and royalty to our ancestors of 1000 and more years ago.  Indeed, it is hard to imagine that an island as small as Ireland had as many as 150 túatha (usually translated as “tribes” or “petty kingdoms”) between the 5th and 12th centuries CE.  (Our evidence for political structures goes no further back in time).

The head of each túath was a rí túaith, “king of a túath”, and typically had an honour price of 7 cumals.  The lóg n-enech, literally “face value” but translated “honour price”, was a measure of each person’s status within early Irish society.  It was a means of comparing the value to the community of those with material wealth, such as farmers, with that of non-material contributers, such as poets and lawyers.  The unit of value, cumal, literally means a “female slave”, although prices were usually paid in cattle, silver or gold (for dignitaries).

While there was not an automatic succession of the eldest son of a rí túath to his father’s position, one was only eligible for kingship if one was the son or grandson of a king.  In our text, lines 39 – 40 / Section 14, Bres’ eligibility is known to those who elect him, as it is stated that his father, Elatha Mac Delbaeth, was a king of the Fomoire.

But túatha were not isolated and self-contained.  Many alliances and treaties were made between túatha, and a king of 3 or 4 túatha, sometimes called ruiri, “great king”, has an honour price of 8 cumals.  The ruiri could garner military assistance from his subordinate túatha in times of war.

The most elevated king described in the law-texts is a rí ruirech, “king of great kings”.  This is seen as equivalent to the rí coíged, “provincial king”, of the sagas, such as Conchobar Mac Nesa of Ulster, or the many kings of Tara.  His honour-price stood at 14 cumals.

Although the idea of “High King of Ireland” gained some currency from the 7th century onwards, no Irish king ever ruled over the whole island.  While the kingship of Tara was definitely prestigious, it was not a centralised power in Ireland.

There were many ways for a king to lose his honour price, thereby reducing his rank and losing him power.  A king who worked with a mallet, spade or axe had his honour price reduced to that of a commoner; likewise for a king who goes hunting without a retinue, one who is wounded in the back of the neck while fleeing from battle, one guilty of fingal, “kin-slaying”, one who defaults on an oath, one who tolerates satire, and one who gives false judgements.

This last is central to the symbolic role of the king.  In contrast to Anglo-Saxon and Roman law, early Irish law was not made by kings, but by a professional legal class.  However, kings were central to the enforcement of law, and it is possible that their statement or other sign of approval was necessary for realising a law or a judgement.  This is enshrined in the concept of fír flaithemon, “royal truth”, whereby a king was honour-bound to speak and act both truthfully and justly.  Its opposite, gaú flaithemon, “royal falsehood”, was said to bring about infertility in women and cattle, crop failure, dearth of fish, defeat in battle, plagues and lightening strikes.  Conversely, the occurrence of these things could be interpreted as signs of gaú flaithemon, although there is no record in the annals of a king losing sovereignty because of defeat in battle.  However, these are common enough themes in the sagas, and the scarcity of food described in our text could be seen as an indication of this kind of natural injustice as well as signs of Bres’ lack of hospitality.  As we have seen, the nails in Bres’ coffin are hammered in with his tolerance of Coirpre’s satire and his giving of false judgement in the case against the Dagda.

Clues to Bres’ exact status as a king come from two elements in the story.  The first is that the cís, “tribute”, levied in Ireland under his reign comes from other rulers of the Fomoire.  This would suggest that they have higher status than Bres, and so Bres must pay the tax to his overlords in order to maintain their treaty.  This theme is echoed in the Metrical Dindshenchas poem on Carn uí Néit, where Bres is seen as ennumerating or assessing the cattle to be given in tribute to the Fomoire over-king.

The next clue is in line 79 / Section 24 of our text.  This tells how Bres took 7 aitiri, “hostage sureties”, to ensure his kingship.  The role of sureties is so inexorable a part of the early Irish legal system that D. A. Binchy, in an article reprinted in “The Irish Jurist”, Vol 7, 1972, describes it as a “fossilised Indo-European institution”.  In a socio-legal system developed prior to the introduction of writing, reliable witnesses to oral contracts were essential.  Beyond that, a contract needed a ráith, “paying surety”, (like a loan guarantor), a nadm, “binding surety”, who would make sure each party held up their side of the contract, and, for an important contract, an aitire, “hostage surety”, who ensured the fulfilment of a contract with his own person.  This meant that default on the contract resulted in the aitire being taken captive by the aggreived party, and had to be ransomed on top of the fulfilment of the original contract.  If he was not ransomed, he would become cimbid, “captive”, a person with no legal standing who could legally be killed, blinded or sold into slavery.

The role of the aitire could be seen as the private individual’s version of the gíall, “hostage”.  In fact, gíall would be a better term in our text, as these are the hostages taken by a king to ensure his just leadership and his fulfilment of treaty obligations.  A gíall was only ever held by a king, and would be a person of high social standing, often the son of a noble of the allied túath.  If an allied túath broke part of the treaty, or if a member of that túath committed a serious offence against one’s own túath, one of these hostages could be taken as a representative “offender” to the court of the over-king, and would suffer the penalties for the wrongs of his túath.  The exchange of hostages was essentially a mutual show of good faith on behalf of the allied túatha, as it is in the interests of both túatha to behave rightly to their allies, and thereby preserve the lives of their members held as hostages.

Bres brings 7 aitiri, whom we can think of as “hostages”, of the Túatha Dé Danann when he assumes the kingship.  While the status and wisdom texts agree that it is fitting for a king to have “hostages in fetters” in his court, the sheer number of these hostages suggests an intricate web of allied túatha.  After all, the celebrated king Níall has retained the soubriquet “of the Nine Hostages”, which we can presume to be remarkable.

Finally,to understand how Bres gets kingship in the first place, we must look at the issue of geise.  It is noted in more than one text that it is geis, “taboo”, for a blemished king to hold the kingship of Tara.  The only record of this in the annals is the case of Conall Cáech, “One-eyed Conall”, who held the kingships of both Ulster and Tara for a time.  He was blinded in one eye by a bee-sting, and this blemish lost him the kingship of Tara.  However, he retained the kingship of Ulster until his death in 623 at the battle of Mag Rath.

Further, it is said to be right for a king to be sogeis, “under taboo”.  A geis is a prohibition on certain actions that have a kind of magical power.  The breaking of a geis in a story is a sure sign of misfortune and tragedy to come.  The exemplar of this theme is surely Togall Bruiden Dá Derga, “The Destruction of Dá Derga’s Hostel”, which tells of the breaking of king Conaire’s nine geise.  The first breach, which instigates the unravelling of all, is actually gaú flaithemon, a false judgement.  Conaire is passing sentence in a case against a group of brigands.  The right sentence is that they should all be hanged, but Conaire spares the lives of his foster-brothers who are part of the marauding gang.  So even though the tale revolves around the breaking of his geise, such as following three red-haired men into the house of a red-haired man, the underlying cause is the chaos brought about by injustice.

In the sagas, physical perfection has a higher currency than in the law and status texts, with Núada’s imperfection losing him kingship, and Bres’ beauty gaining it in his stead.  Personal beauty, especially for men, is of paramount importance for kings and heros in Irish literature.  It speaks to the symbolic unity between the king and his túath, where the blemishes of one, whether in body or in status, reflect in the other.  From our legal and historical sources, however, it was justice, fairness and courage that truly defined good leadership.

For an excellent and comprehensive review of early Irish legal texts, read “A Guide to Early Irish Law” by Fergus Kelly.