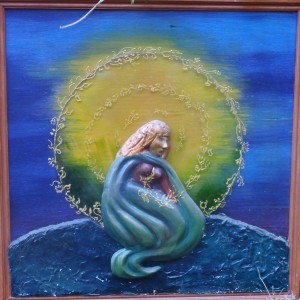 The green grey morning is soft with mist.

Airmed sits on the soft earth of the mound, her yellow cloak spread empty before her covering the damp earth.

All around her lie green herbs, no longer fresh and growing for they were harvested in hope and are now scattered in sadness.

Airmed gathers the measure of her cloak around her and her thoughts are not soft.

She gathers her thoughts to her, garners her memories.

There was her father, Dían Cécht, physician to the Dé Dannan, greatest of healers who, when Nuada the king had lost his arm in battle, had not despaired.

“For though I cannot restore your arm”, he had told the blemished chieftain, “yet will I make you the greater.” And with his healing magic he had constructed a hand of silver so cunning that each joint moved to grip and grasp as easily as a hand of flesh.

Yes; the hand of silver had brought renown to Nuada Lám Argait, and it had kept him the kingship, for no blemished man could be king, but it had not healed the lost limb.

No; that had been left to Míach, her brother.  Together, he and Airmed had learned the lore of healing, both becoming wise, each the measure of the other, until Míach had gone the further. With the magic of his learning he had recovered the lost hand of Nuada. For three times three days he had kept it by him, preparing it with spells and incantations, and then, when it was ready, he joined it, bone to bone, sinew to sinew, to Nuada’s arm.  There it re-grew and Nuada was whole and healed.

If Nuada was glad of this healing miracle then Dían Cécht was not. A dark mood had descended on her father. Taking up his shining blade he brought it down upon his son’s head, cleaving the skin of his skull.

Twice more, Dían Cécht brought the blade down on his son’s head, each time cutting into the skull more deeply.

Again the blade fell, and this time Míach’s brain was split in two and he died.

Airmed sadly buried her brother under a mound of soft earth and watched there as the bare soil softened and grew green with new grass; new grass and green herbs.

And Airmed had guarded these herbs, harvesting them in their time, sorting and recording them. For there were 365 herbs that grew from her brother’s grave, one for each of his joints and sinews, one for each day of the year ,one for each illness that ever had been or ever would be. She gathered and garnered them all.

But her father’s dark mood had not yet fled.  He found her where she was. In his jealousy and anger he scattered the plants, destroying their order.

And Airmed sits still on her brother’s grave in the grey green morning. She sits with the basket of her empty cloak before her until the time of his seed healing shall come again.