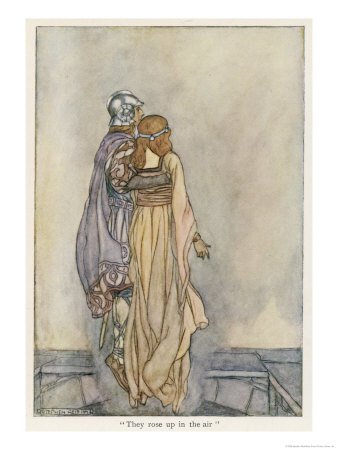 The afternoon sunshine silvered the water, diamond-points lighting the waves with laughter. The girls all stood in happy chattering groups, finished with their bathing, wrapping themselves in their flower-coloured mantles as they dried their wind-washed hair.

Then one of them, perhaps the most beautiful, so it was said, looked up, suddenly still, peering seaward, into the grasslands of the estuary. She watched on as the silhouetted horseman came closer, took on detail and colour.

He was a fine man, beautiful to see.  Now she could make out the colour of the noble horse that carried him, high-stepping, the curling mane spray-tossed.

He was indeed a fine man.  Yellow hair, bright as butter, fell in silken waves to his shoulder, bound with a golden band. His green mantle hung, all shimmering folds, over his crimson tunic and the great broach pinned at his neck was of good gold, in shape like a leaping fish.

Oh, yes, he was a fine man, and finely armed as well. A shield of silver, sun-rimmed in gold was slung at his back and, in his hand, he held a five-pronged, gold-banded spear.

Étaín had seen so many fine warriors, here at her father’s court, but not one as noble as this, not in this world, not in the mortal world.

Étaín  realised that she was still staring at this beautiful warrior and tried to tear her eyes away, but as she turned around to her companions, she saw that they, too, were transfixed, silent, gazing at the horseman.

Yet it was not to them he was looking. Étaín’s heart leapt as she understood that it was her, only her, he saluted.

Here, this day, at Síd Ban Find west of Ailbe

Here, today, among the young ones

It is she who healed the King’s eye

With water from the well of Loch Dá Líg:

It is she that was swallowed by Étar’s wife

Swallowed in a gobleted drink.

Because of her the King shall chase

and drown his two horses

in the pool of Loch Dá Airbrech.

Full many a war shall be

Brought to Eochaid of Meath because of you:

There shall be destruction of hollow hills

And battles fought by thousands.

It is she whose tale is sung in the land;

It is she who will seek the hand of the King;

It is she who is called Bé Find,

She is our Étaín forever

The afternoon sunshine silvered the water into diamond-points, but Étaín saw none of it. Her mind was dazzled by the words of the otherworldly warrior. She understood none of them and yet, and yet, … her heart told her that they were truth.

When she finally looked up, the warrior was gone, and the other girls were chattering together in bemused giggling groups. Etain shivered. The sun had gone behind clouds and the darkening sea had become grey, bearded in white.

1 thought on “A Prophecy”