A Christmas Card from the Story Archaeologists

In our Midwinter special we pulled out some of the less familiar treasures of Irish mythology from Manannan’s famous Craneskin bag, also known as the treasure bag of the Fianna. In a light hearted attempt to seek out some unusual seasonal gifting opportunities, we wondered which ones might still be appropriate in the early 21st century. We also thought that we might even find these treasures in the shops and on-line today, although they could  appear under different guises. 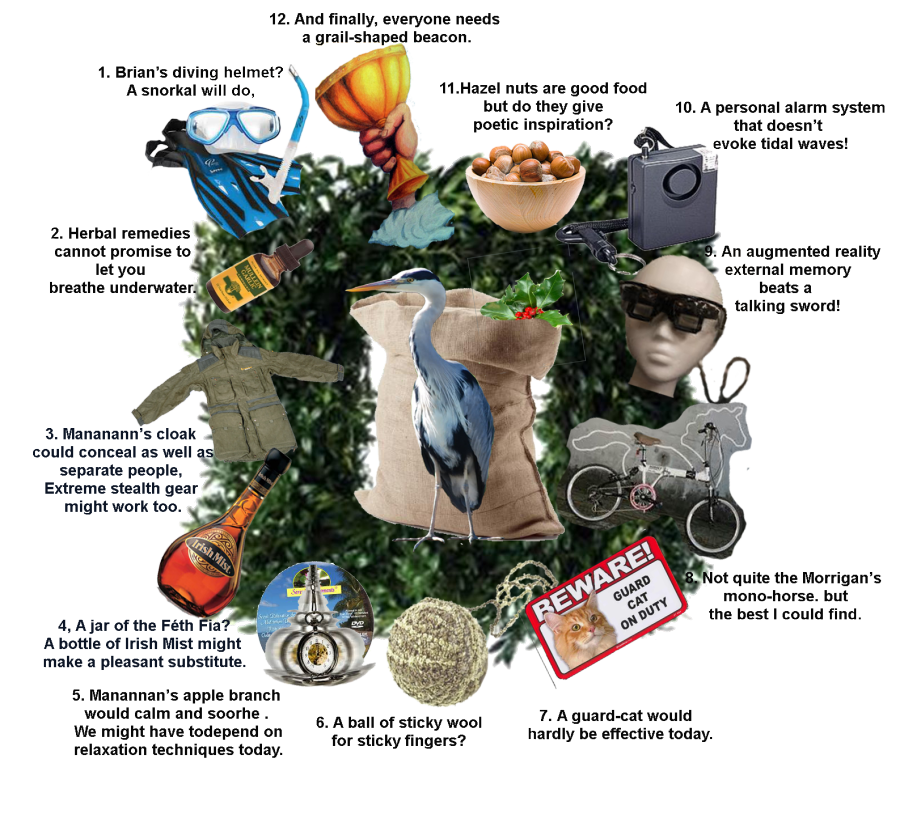 The Craneskin bag: The treasure bag of the Fianna is referenced in “The Boyhood Deeds of Fionn”, a medieval  narrative with more detail in the Duanaire Finn , a compilation of late medieval Irish poems.

1.Brian’s diving helmet comes  from “The Children of Tuirenn”.

2. The ear herbs are from the Old Irish tale, “The Adventures of Fergus Mac Léite”

3. Manannan’s cloak is from “Seglige Con Chulainn” and other tales including the medieval tale concerning Cormac’s cup of truth.

4. The Feth Fia (The magic mist) is found in several tales. One example is the mist called up by Birog to allow Cian to travel to Balor’s Isle in the folktale version of the birth of Lugh.

5. The apple branch has its origin on the magical ‘otherworld’ Isle of apples. It is a central motif in the story of Cormac MacAirt and his journey to Manannan’s isle.

6. The sticky ball of wool is encountered in the Old Irish narrative “The Voyage of Bran mac Febail”.

7. The guard cat is the keeper of an island in the 10th century “Voyage of Máel Dúin”.

8. The Morrigan’s strange one legged horse is to be found in the “Táin Bó Regamna”, a story closely associated with “The Adventures of Nera”.

9. Orna is the sword belonging to Ogma. He acquired it after the battle of  Moytura.

10. Ochain, the moaning shield belonged to Conchubhar but was carried by his son, Fiacra. It answered to the three great waves of Ireland.

11. The Hazel  Nut was best known as a repository of wisdom growing on a tree which bears catkins, leaves and nuts at the same time.

12. The ‘Holy Grail’ of celtic studies is the long lost text, “The Cín Drumma Snechta”.