The Isle of Women 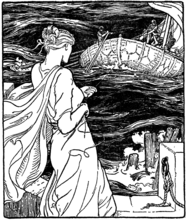 Máeldύin stood at the stern of the triple skinned boat, brooding moodily over the glassy waters.  His eyes remained fixed on the shadowed depths, almost as if he were searching for another of those uncanny underwater islands; a place to dream, a place to drown.

Behind him, was the clamoured activity of the boat. The voices sounded busy, cheerful, in spite of the muffled groans of the man who had been so badly mutilated in their flight from the island.

His men would need his support, his re-assurance. but he could not face them, not yet, not while the rocky island would still be visible, outlined in misted distance. He would not look up until the land, itself, was lost to memory.

Memory would not let him be. The sea was a mirror reflecting his thoughts back at him in sharp, sunlit little darts. He couldn’t be sure that they had not just sailed away from Paradise.

So many wonders, so many islands, had been laid in their sea path. They had seen so much unexpected beauty and, equally, much that was disturbing, un-natural; dangerous.

The sea mirror reminded him of a bizarre menagerie, seething with huge and hungry ants, slavering cannibal horses and fiery pig creatures. These monsters were not the only threats to natural order that he and his crew had faced.  Things had warped and wavered even as they had watched. Sheep that could be colour changed by moving across a fence, a treasure warding cat that became a deadly weapon, these they had seen with their own eyes. Simple things, natural things, sorrow, joy and sleep, all had become terrors on this voyage into the unknown.

And then they had come, by chance to this Isle of Women. Here they had met with such courtesy, sumptuous hospitality, and warm welcome. Here they had been offered all a man could wish for; feasting, hunting, constant leisured wealth without work and the friendship of fine women, worthy wives. There had been one waiting for each of the weary mariners and the wisest and best for him, his Queen.

This was a land from the oldest tales It had been the long sought reward of many a brave hero, and here, like them, Máeldύin and his comrades could stay, free from sickness, grief and age, forever. If this was not paradise, he did not believe his imagination could encompass anything sweeter.

Then his men had become bored, had become sated with pleasure, until their arms ached for labour and the endeavour of the seas.

“For we have been here for only three months but it has seemed a full three years!” they told him.  “If you will not leave with us then we will depart without you!”

He had sighed, but could not, in conscience, abandon his companions,

And so, they had sought to depart in secret. It was a dishonourable escape to sneak away like thieves in the night. And, it had not even succeeded for his noble woman had brought them back with a ball of wool that held fast, glued to his hand as he stood on the boat. It had reeled them in, whether they would or no.

His companions grumbled openly now, turning against him, certain that he had chosen to catch the lure.

“For if you cannot let go, then we are trapped forever”, they complained.

Even Máeldύin began to believe that there might be a truth in their blame of him.

“If you do not trust me”, he retorted “then when a second chance of escape is put before us, let some other reach out for the wool.”

“And if it sticks to his hand?”

Máeldύin walked away in disgust.

For  another three times three months they remained in this paradise but the peace of the island had already left it.

Little waves licked at the hide coverings of the boat and Máeldύin looked up, adjusting his balance. The island had passed beyond view into sun-kissed mists. Yet, for a moment, he thought he could still hear the grief-filled voices of the women, crying for their lovers.

Now there was no land to be seen out here on the landless sea where all men were landless, homeless men.  Máeldύin felt his homelessness sink, like a weight, into the blood of his heart. It had been three years now, and he knew his companions yearned to turn for home. But where was home? After the dreadful storm had flung them beyond the known, they had laid the oars aside choosing, perhaps, to go deeper into the unknown where nothing was as it seemed.

And did he even have a home to go back to? In that world also, nothing had been as it seemed. He had given up the kindly court of his fostered childhood, on finding that the tale of his birth had been a lie, Now, only one of the three he had  then thought of as brothers was still alive in the boat. He had told them, begged them, not to come with him. Their place had been in that other, comfortable world,

No. he, Máeldύin, in arrogant search for unadorned truth, had uncovered the dishonour of his blood heritage. He had met his mother, a nun, raped by his father on a raid for plunder and glory. He had met his father’s people and heard the tale of his father’s death at the hand of sea raiders. And this glorious journey had begun as a simple quest for vengeance, for the killing of his father.

Máeldύin sighed deeply, and turned back into the boat, He had tried to be a true son to Aillil, Edge of Battle, a man he had never known, but this desire had led him far beyond his enemies, beyond the edge of the world. Here he had found wonders, terrors, and truths, if truths they were, beyond imagining.

Yet, he had also been given a new family. Máeldύin smiled, in spite of himself, and moved to help his friends, as they sought to save the man whose hand had been sacrificed in their sea escape,

He felt his spirits lifting as the silver mists fled before the strengthening sun.  Now, he knew who he was. Landless man or no, he was a man with a story, and such a tale that the best of bards would be weaving with its words for ever.