Every parish in Ireland has its holy well, with specific healing properties and a “pattern day” (Patron Day), where Mass is said and pilgrims perform rituals by the well.  In the Arigna area of South Leitrim / Roscommon, one of the best known of these is St. Lassair’s Well in the parish of Killronan, between Keadue and Ballyfarnon. 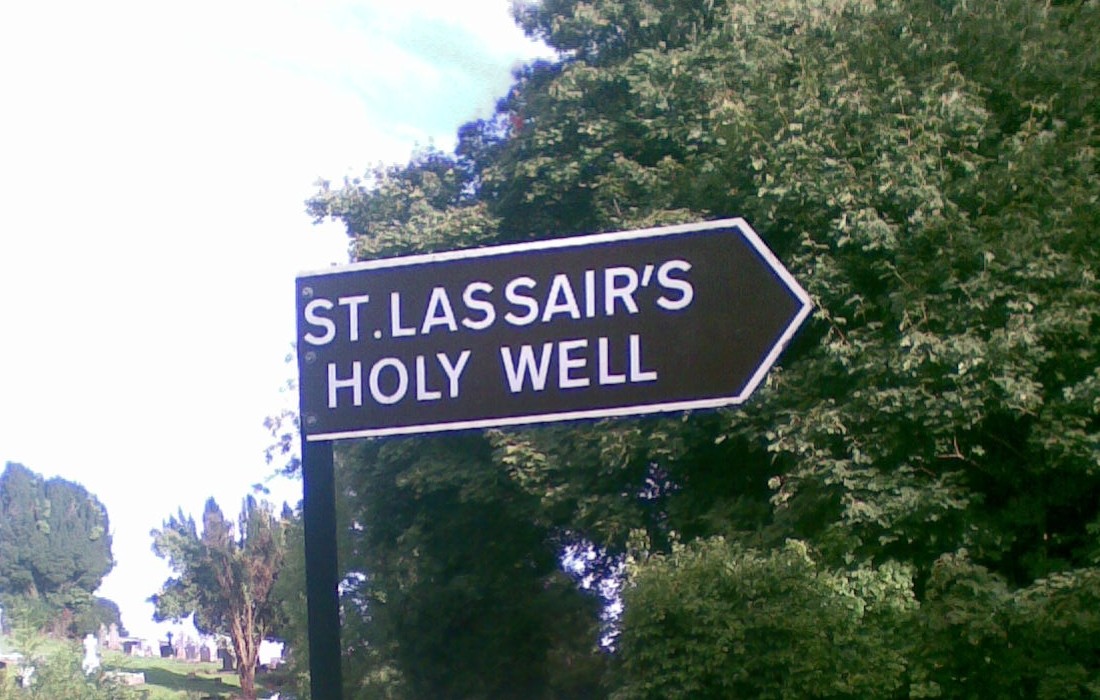 This well, like many others around the country, is well loved and cared for.  It is set into a “garden” sandwiched between a busy (in rural terms!) road and the shore of Lough Meelagh.  The main features of this garden are the well itself, surrounded by a stone path and facings, and the “altar”, a flat stone slab on four stone legs, with a bullaun (spherical stone) set on top. 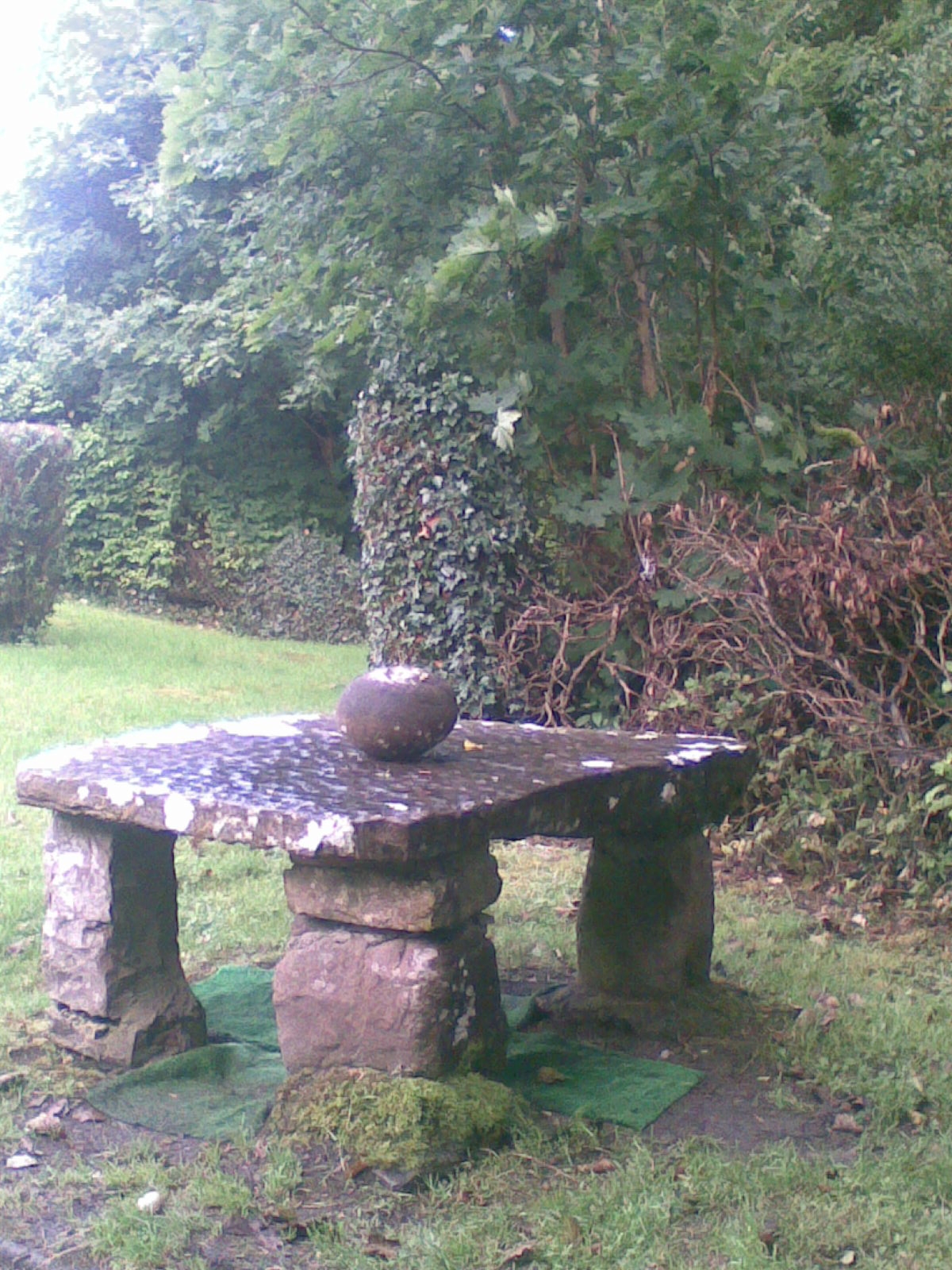 Although I have never attended the pattern day mass, there is ample evidence that the site is continuously used.  One use is the cure for bad backs that involves crawling in a figure of eight around the legs of the altar, and someone has kindly laid matting under this slab to prevent muddy knees.  The bullaun on top is supposed to be a blessing / cursing stone: you rotate it clockwise for a blessing, anti-clockwise for a curse.  The top of the altar is pitted with countless depressions, although this could be the result of some odd form of erosion. 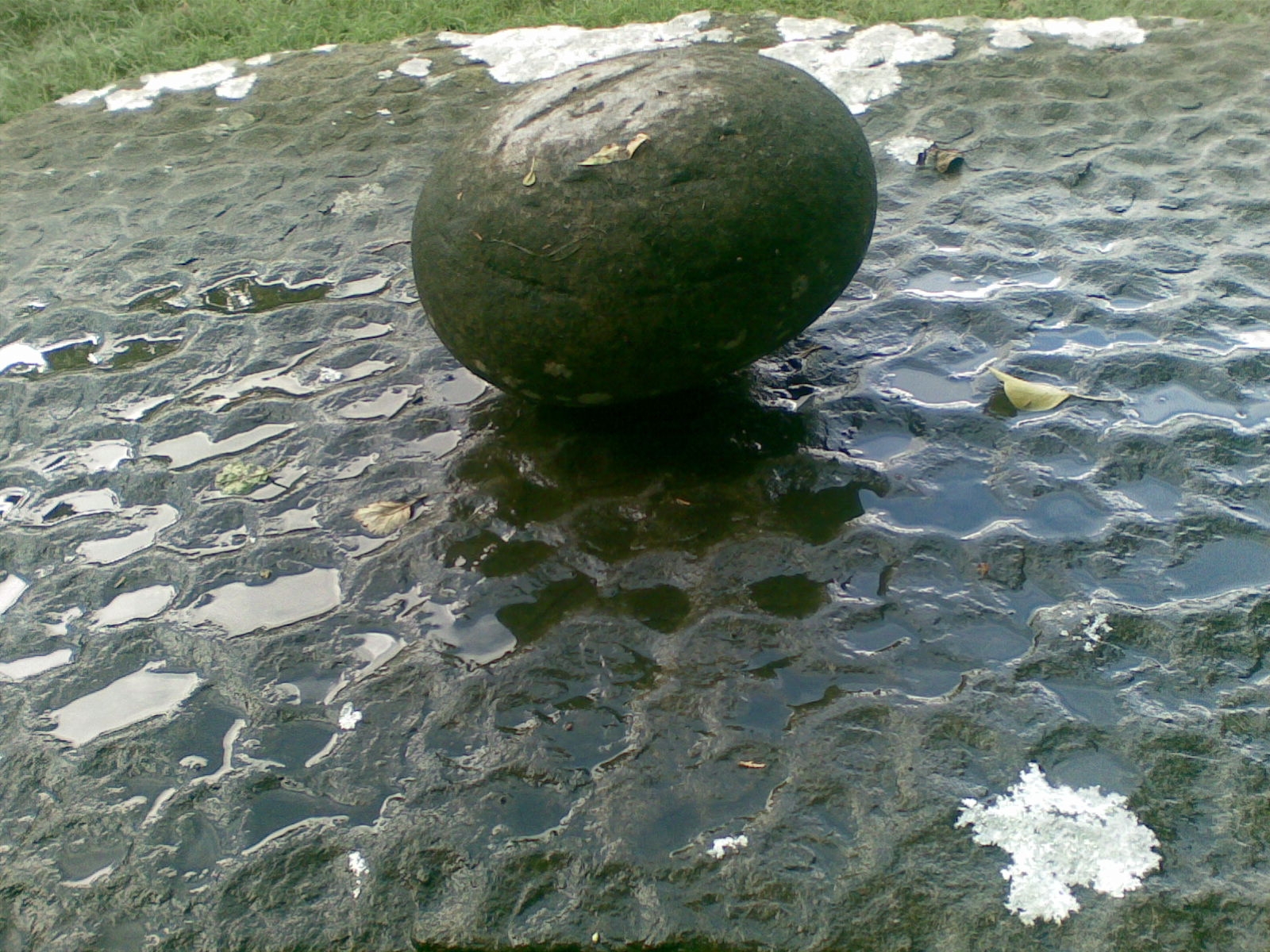 Beside the well itself, folk have left cups to facilitate drinkingof the fresh water.  But many people have left offerings there for the answering of their own prayers: asthma inhalers, baby bootees, pens (at exam times) and countless beads.  More offerings hang from various trees and thorn bushes surrounding the garden.  The well used to be overhung by a large ash tree, and countless pilgrims had hammered coins into the bark as a kind of spiritual tax.  So many coins were stuck deep into the tree that it was weakened and had to be removed after it fell in a storm.. 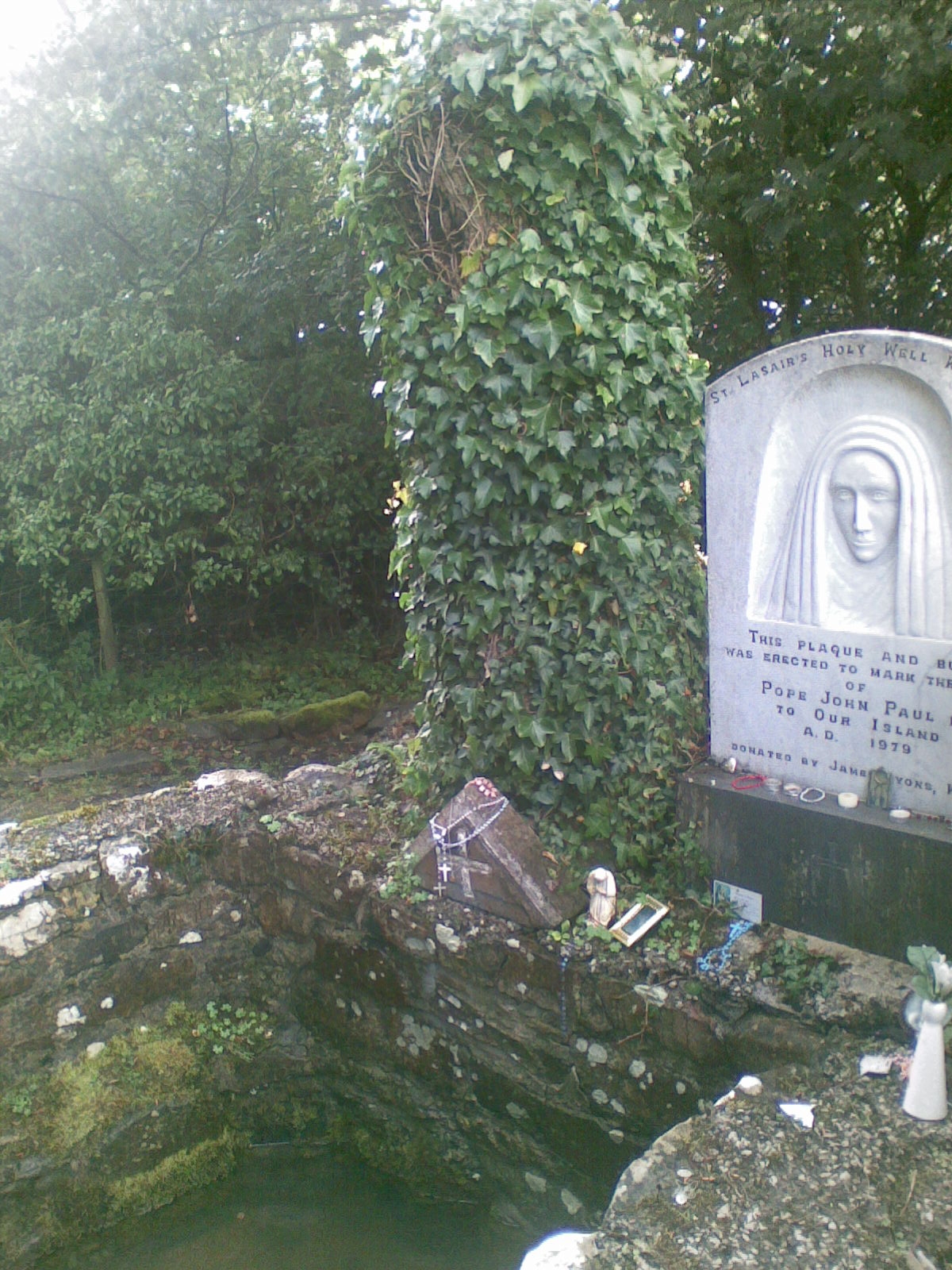 Here you can see some of the offerings left by pilgrims

As with any saintly figure, one cannot disentangle history from mythology in examining the stories that cluster around a figure such as Lassair. She was said to be the daughter of St. Rónán, for whom the parish of Killronan is named.  Her name means “Flame”, and a 17th century hagiography from the Stow Missile reports that this name was given to her when she survived a raging fire.  She was apparently so absorbed in the singing of psalms and prayers that she didn’t notice the flames roaring high above her head.  The onlookers saw the young woman surrounded by fire, and the name “Lassair” stuck to her from then on.  This naming story mirrors almost precisely a story of the young St. Brigid. 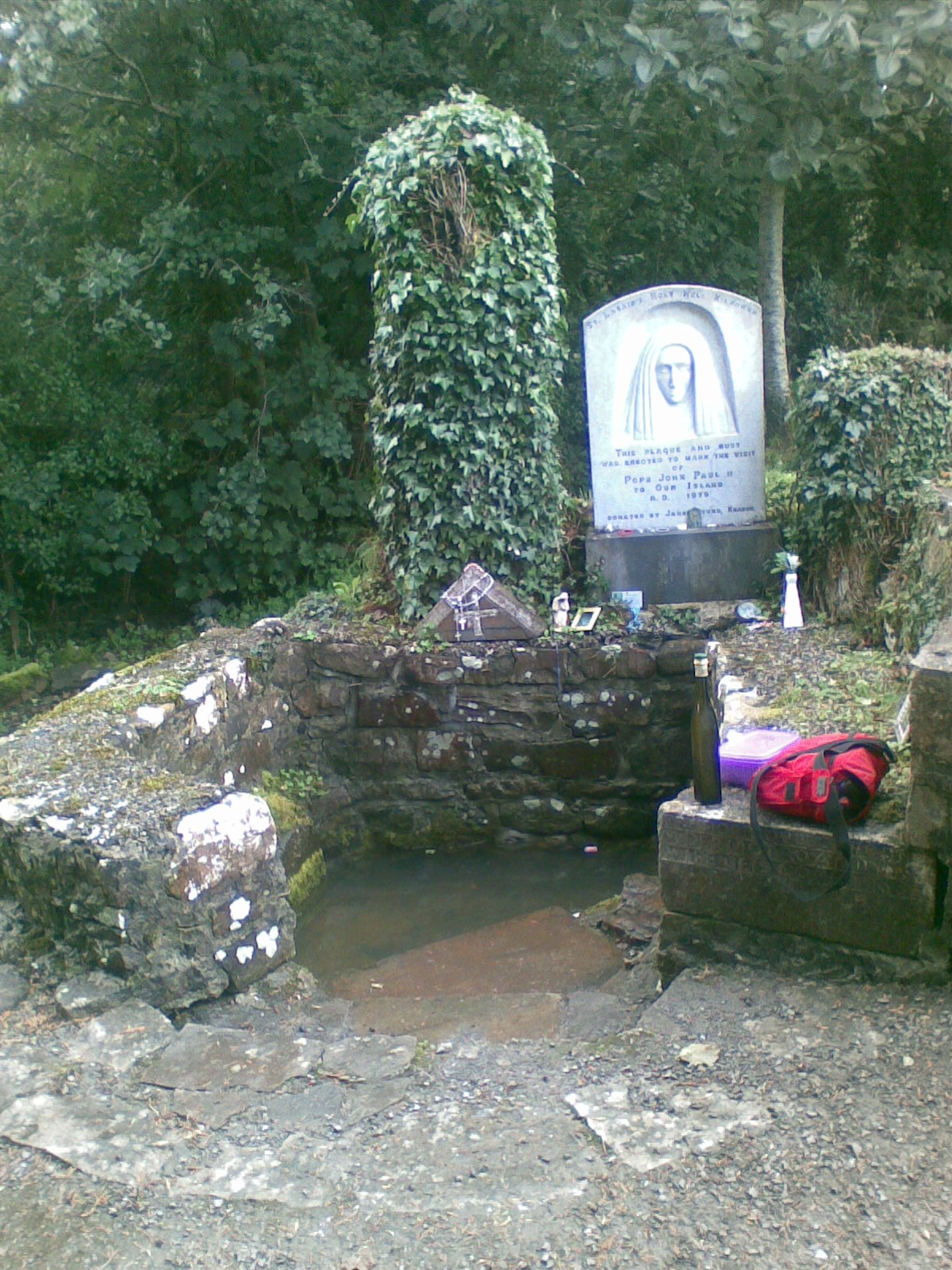 There are many stories of her healing of the sick through preparing a draught using her well-water, and also by using mud scraped from the cliff above the well.  This is also reported in the 17th century text, and folk still collect this clay for luck and protection. There is a story recounted by Mary Condren in her book “The Serpent and The Goddess” which links Lassair to St. Brigid in a curious way.  The story is that St. Brigid came to visit St. Lassair, and so Lassair slaughtered her last ewe in order to provide food for the saint.  During the meal, however, St. Patrick then dropped by.  Lassair had no more to offer the new guest (presumably both clerics had brought full retinues), and Lassair was at risk of breaking the laws of hospitality.  Brigid shared her portion so that Lassair would not lose face, and in gratitude, Lassair gave Brigid her church (of women) and her flock of sheep.  Condren reads into this a passing on of the following of a local female figure to the stronger, national figure of Brigi; a handing-on of the flame, or the mantle, to keep practices of female spirituality alive in an increasingly male church. 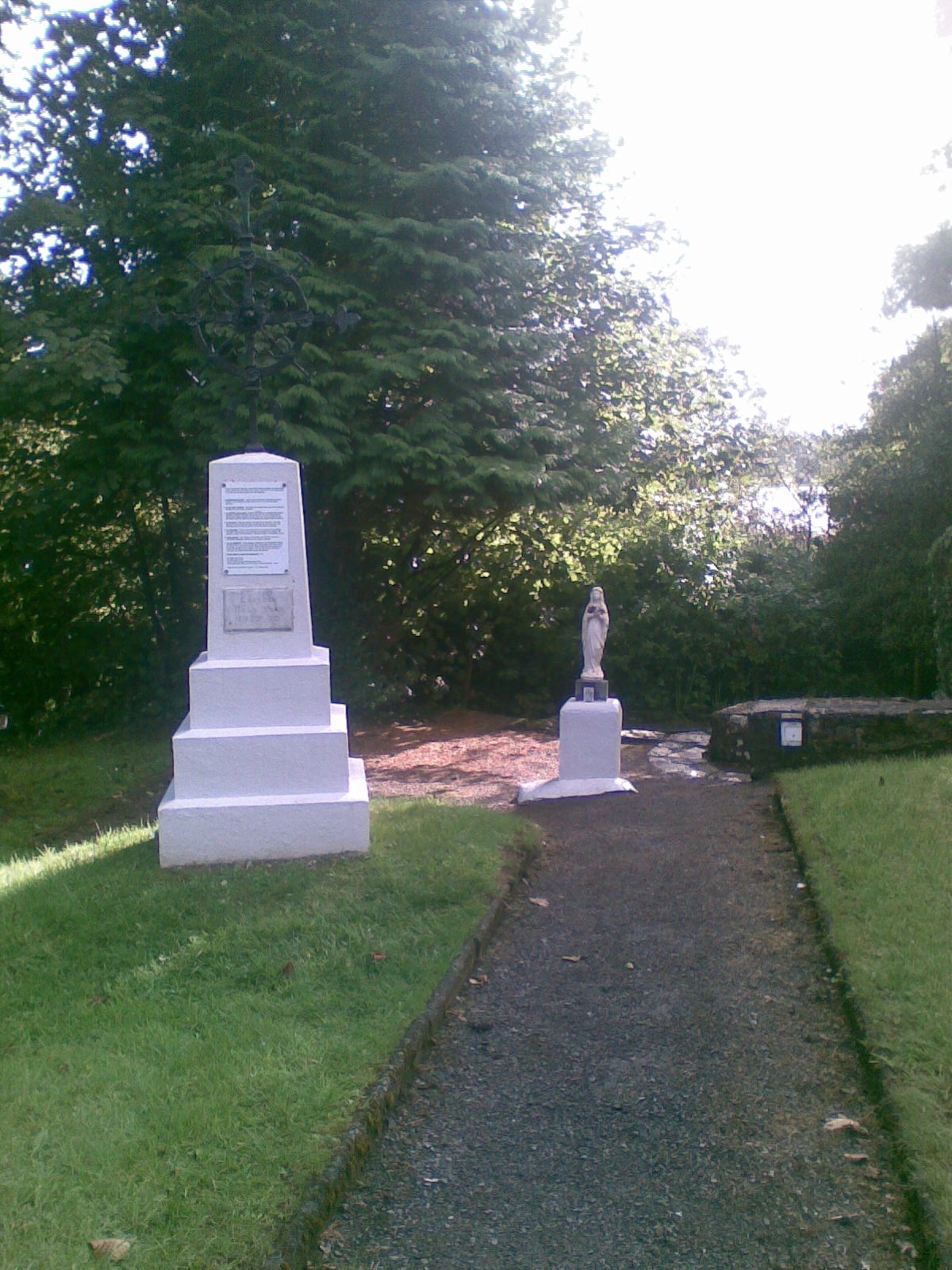 There is something to be said for this hand-over, and some characteristics that seem native to Lassair are certainly now associated with Brigid.  In particular, the coincidence of the flame (Lassair, Brigid’s Fire) and the well seems strongest in central imagery.  Both women were depicted as powerful land-owners who provided gracious hospitality and could cure the greivously ill.  Both fires still burn brightly in their followers.