Defining the longevity of information passed orally from group to group, and from generation to generation, is hard to quantify. Stories change and grow. Their sources become lost in the mists of time, and yet they continue to have significance. Back in 1998, “The Year of The French”, commemorating the bicentennial of the political events in Ireland in 1798, I was advised to have a talk with a local family. “They have the story of the 98,” I was told. It seemed that family members could describe the coming of the French soldiers. It was their story, and the description had been passed on through the generations. There is something similar in my family, although the memory is now so tattered as to be no more than a ghostly remnant. My grandmother told me that her grandmother told her… and so on… that she had seen Charles ÍI walking his spaniels. There is not much more to this story; so, although curious, it is not exactly historically earth-shattering. 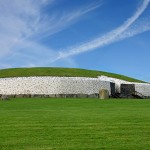 In the late 1960’s, when Professor Michael O’Kelly was excavating and restoring the Newgrange complex, (originally built in around 3250BCE), he came across a curious rectangular slit above the door. It was half-closed by a square block of crystallized quartz, apparently designed to work as a shutter. There were scratches on the quartz: clearly it had often been slid to and fro, providing a narrow entrance to the tomb above the main door, which was itself firmly sealed with a 5-ton slab of stone. But what was the slit for? It was too small and too far from the ground to be an entrance for people. Professor O’Kelly remembered a local tradition which said that the sun always shone into the tomb at Midsummer. Perhaps the ‘roofbox’, as it came to be known, was designed to admit the summer sun to the tomb without the entrance stone having to be moved. “But it was quite obvious to us that it couldn’t happen at Midsummer because of the position of the sun,” says O’Kelly. “So if the sun was to shine in at all, the only possibility would be in Midwinter.” Now every year a worldwide lottery is held to select the privileged few who witness the truth of this ancient tradition, if the weather permits. So some elements of the story may have lasted in the area for around 5000 years. Read about the excavation of Newgrange here: http://www.knowth.eu/new_grange.htm.

There is one country where the longevity of story is taken into account and generally, accepted. This is, of course, Australia with its rich store of Indigenous stories.  Since the Sinann episode was first published in 2012, I have continued to explore the themes to be found in these stories and the parallels with Irish texts. My research trip to the Northern Territories lead to our series three podcast episode, Dindshenchas and Dreamtime Let me be clear, I am making no claims for any historical connection, whatsoever, between Irish and Australian Aboriginal heritage. The similarities lie in their function as Dindshenchas tales, (The lore of prominent places). The Metrical Dindshenchas, as Isolde commented in our most recent podcast episode Sinann Revisited, is a most precious resource, an anthology of gathered folklore and transmitted beliefs collected at an early date. The near equivalent to this resource among Australian Indigenous stories would be the rock art library of ‘picture’ texts that have helped to keep this Dindshenchas, style knowledge alive over many centuries, maybe even many millennium. This topic was discussed fully in Dindshenchas and Dreamtime but, I have continued to research anthologies of orally collected Aboriginal tales with specific focus on possible longevity of stories.   I found several significant stories. For example, I came upon a Dreaming story of the creation of the Narran Lakes in New South Wales, referencing the presence of crocodiles. These creatures are now longer found in this State of Australia and have been absent for 15,000 years, since the last ice age. I also found Dreaming tales belonging to Aboriginal tribes from region of the Great Barrier Reef coast. These tell how their ancestors lived on the coastal plains near the edge of the continental shelf. Yet this same area was covered by the last sea rise, more than 15,000 years ago when the Great Barrier Reef was formed. I searched the Queensland Central library, last year and approached the Anthropological department of Queensland University on a hunt for more evidence. However, I may have been searching in the wrong places. Recently, I found a reference to a paper presented by Nick Reid Associate Professor, School of Behavioural, Cognitive and Social Sciences at University of New England and Patrick Nunn Assistant Director, Sustainability Research Centre; Professor of Geography at University of the Sunshine Coast. They give several excellent examples of stories that, they believe, show evidence of extreme antiquity.

Stories … from the Narrangga people of Yorke Peninsula recall the time when there was no Spencer Gulf, only “marshy country reaching into the interior” lying just above the ocean surface and dotted with “freshwater lagoons” where birds and other animals flocked. One day the sea came in, perhaps through the breaching of a natural barrier, and the area has since been submerged. If these stories refer to flooding across the outermost lip of Spencer Gulf, which today lies around 50 metres below present sea level, then they may have originated 12,000 years ago. Even if they refer to inundation of the central part of the Gulf, they are likely to be more than 9,000 years old.

The article, describing their findings is well worth reading. http://theconversation.com/ancient-aboriginal-stories-preserve-history-of-a-rise-in-sea-level-36010 Read about the Dreaming stories here: http://australia.gov.au/about-australia/australian-story/dreaming.

So, could a story retain elements of a cataclysmic event in Ireland that informed the story of Sinann? After the end of the last Ice Age, the Mesolithic landscape was very different, both in landmass and climate.   The middle stone-age hunter-gatherers lived mainly on the shorelines and “machas”, the fertile coastal plains. The close-forested inland areas must have seemed dangerous, “otherworldly” places; a rich source of gifts of food, but mysterious and risky. Settlement in the West of Ireland is better documented in the Neolithic period, (See information on the wonderful Céide fields in Mayo), but Mesolithic settlement right across the west is apparent both on the coast and along rivers and lake areas. The warmer weather of the post Ice Age centuries lead to climatic turbulence, much like we may be facing today. There were several known major Tsunamis, caused by melting ice, which changed the land masses of the world. One such was the Storegga Slide tsunami around 8000BCE that flooded the Doggerland, turning Britain into an Island although the land-bridge did make occasional brief reappearances thereafter. There was another possible Tsunami that was caused by the abrupt melting of lake Agassiz in Canada at a roughly similar date. It has been given as the cause of the creation of the Black Sea, and could have impacted on the west of Ireland; although some experts doubt that this Tsunami would have crossed the Atlantic.  Read about the tsunami here: www.tsunamisociety.org/233murty.pdf. Read more about Ireland at the end of the Ice age http://www.wesleyjohnston.com/users/ireland/past/pre_norman_history/iceage.html Download a very interesting research paper on “Extreme wave events in Ireland:” 14 680 BP–2012 L. O’Brien, J. M. Dudley, and F. Dias

If the conclusions drawn by professors Reid and Nunn are to be accepted, then it is not impossible that the story of Sinann may not echo a similar memory.  The authors of the paper feel that such memories may have survived in indigenous Australian stories owing to Australia’s isolation into comparatively modern times. They also comment, Aboriginal storytelling is characterised by a conservative and explicit approach to “the law”, value given to preserving information, and kin-based systems for tracking knowledge accuracy.

Almost the same paragraph could have been written describing the process of collating and preserving early Irish story.   They suggest that Australian Aboriginal stories are, possibly, unique in their longevity It could be that certain Irish stories might alter this conclusion.

1 thought on “How long can a story last?- revisited”