A Pilgrimage to Abydos 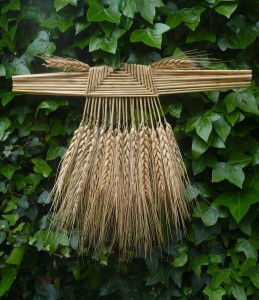 The ‘Bride of the Corn’.

Getting to Egypt had always been the goal of a pilgrimage for me. This had been the case since my uncle, a very scholarly man, with a wonderful sense of humour and a gift of teaching, first took me to the British museum. I was ten and putting together a school project on 12th century illuminated manuscripts. (Yes, I know … but I was that kind of child). When he had shown me a great many beautiful documents and bought me a stack of postcards he asked me with a twinkle in his eye “Would you like to see the mummies?”So began my love affair with ancient Egypt. I finally got to Egypt in January 2012, although I was there for a few days in January 2011, only to be trapped in a hotel in Cairo with the tanks and tear gas. But that’s another story.

Strangely enough, I left for Egypt this year immediately following my uncle’s funeral. The final time we had met had been in the British Museum on 30th December 2011, only a week before his unexpected death. We had not visited the museum together for many years. So I suppose my trip to Egypt was a pilgrimage in a very special way.

This is not the place to share my experiences of finally standing on the site of Ankenaten’s city, Akhetaten, ‘Horizon of the Aten’. I could go on about it indefinitely. However, there was another pilgrimage destination to visit, one that has held a powerful attraction for more than 5000 years. This is Abydos.

In Egypt, any tourist must experience what a magnet must feel when surrounded by iron filings. Vendors and children attach themselves to you. They walk in front of your feet and face, filling your eye-line with fluttering fabrics, dusty resin statues and peacock tails of gaudy postcards. There is a peculiar broken-paced shuffle adopted by all tourists in Egypt. It is accompanied by jerky head movements and vacant stares as all eye contact is avoided. The gait is highly counter-intuitive and very slow, but you get used to it after a while and generally don’t end up buying too many enamelled camels!.

Abydos stopped me in my tracks. The great temple of Abydos, built by Seti I, stood before me, nearly complete and an impressive sight. But what had made me pause was not the monumental entrance to the temple and its magnificent hypostyle. It was my cluster of earnest attendants. The dusty children in their striped galabeyas were all holding up strangely familiar plaited corn dolls, reminiscent of the Brigid’s crosses seen here in Ireland every February. They couldn’t tell me what they were; just that they were good luck and that I needed one. I bought several.

You see, in pharaonic times, it was every Egyptian’s greatest wish to make a pilgrimage to Abydos and a dearest dream to be buried close by. Abydos was the traditional burial place of Osiris. Inscriptions in tombs throughout Egypt frequently record journeys to and from Abydos, as important pilgrimages made by individuals who were proud to have been able to make the vital trip.

It is beyond the remit of this article to tell the full story of Osiris and his sister and consort Isis. They were beloved from the earliest days and still revered in Roman times. Several festivals during the year were held in Egypt in celebration of the Osiris.

Osiris, “Asar”, was the first child of Nut and Geb, and therefore the brother of Set, Nephthys, and Isis. His brother Set, a representation of the wildness and strength of desert places, was seen as antagonistic to his brother. He made a fine chest  (sarcophagus) and offered it to the one it would fit – a bit like Cinderella’s slipper – and then had the chest sealed and thrown into the Nile when Osiris lay down in it. Isis retrieved his body. Set then cut the body into 14 pieces and consigned them to the river again. Isis found all the pieces except his penis, which had been eaten by the now-cursed Nile catfish. She magically re-assembled Osiris, and resurrected him long enough to become pregnant and give birth to her son Horus.

Horus and Set battled together  for a long time, but Horus, with the help of his mother, was eventually victorious.

Because he had been a king on earth and had overcome death, it was believed that he would receive a loyal subject after death. They themselves would become “Osiris”.

Abydos is indeed impressive. There were nine or ten temples, dating from the first dynasty to the twenty-sixth dynasty, built at Abydos; but what the tourists generally visit is the great temple. It is spectacular; from the intricately carved and coloured pillars and walls of Seti’s hypostyle, to the grandiose boasting of Rameses ii ‘s temple as he bestrides the walls, holding captives by their hair, in his age-old propaganda battle to persuade us of his victory at the battle of Khadesh. (It was, at best, a draw.)

Yet with my plaited corn dolls in hand, I was drawn to the Osireon, found outside and behind Seti’s temple. This mysterious ruin is constructed of huge monolithic blocks, unadorned and utterly archaic in atmosphere. Water fills the rectangular place, with a great stone rising from the green water. The building was once roofed, but because of the level at which it was built, may well have always been flooded. Perhaps this was to create a model of the mythical mound of creation which the Egyptians believed rose from the primeval waters. It is impossible to be certain. The ruins are tranquil and highly atmospheric. Could this be the most ancient site in venerable Egypt?

Strabo visited the Osireion in the first century BCE. He wrote:

“Above this city [Ptolemaïs] lies Abydus, where is the Memnonium, a royal building, which is a remarkable structure built of solid stone, and of the same workmanship as that which I ascribed to the Labyrinth, though not multiplex; and also a fountain which lies at a great depth, so that one descends to it down vaulted galleries made of monoliths of surprising size and workmanship.”

I am afraid  most archaeologists consider the Osireion as an integral part of Seti’s temple designed deliberately to look the part of an antique tomb of a god.

Nevertheless, as I walked back to the coach with my corn “pilgrim badges”, I felt that I was carrying away items that must have been offered to visitors for thousands of years.

Recently, I found further reference to these corn dolls in an old, but now re-published, book, Winifred Blackman’s “The Fellahin of Upper Egypt”, first published 1927. Here she identifies identical corn dolls and shows a picture of them in use.

“During harvest-time every available man, woman, and child is employed in the fields, but before any of the corn is cut some of the villagers go into the fields and pluck the finest ears by hand. 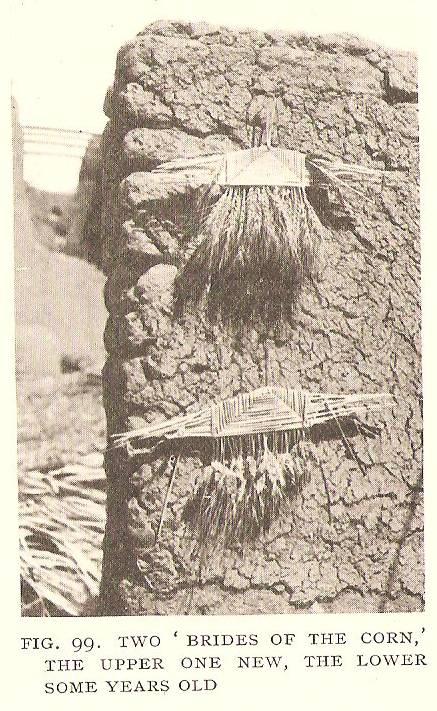 These are plaited into a special form, and this object, called the ‘bride of the corn’ (arūset el-kamh) is used as a charm. One may be suspended over the house-door as an antidote to the evil eye; another may be hung up in the room containing the stores of food, as a charm to ensure abundance. Many tradesmen hand such objects in their shop-windows, believing that this will bring them plenty of customers.

Again, in some parts of Egypt, the ‘bride of the corn’ is placed on the heaps of grain after the winnowing is completed, as a charm to secure a good harvest the following year. … The ‘bride’ may be left hanging until it is replaced at the next harvest, or again, it may be allowed to remain in its place until it falls to pieces.”

The only place that I encountered these plaited corn figures was at Abydos. It is very likely that they are connected with the cult of Osiris. Who knows how long the custom has been practiced? In Egypt 5000 years is a very short time.

No wonder Abydos made such an impression.